After purchasing your projector, what’s next? Do you just turn it on and point it towards your screen?

Projector placement is very important. If your projector isn’t placed right, the image will not fit well on the screen.

How do you decide where to mount a projector? The options are numerous!

This article contains a list of 8 places to mount your projector. We also include a few tips to help you decide which suits you.

Wondering where to mount a projector? You can mount your projector in any of three ways:

These three methods allow a variety of styles for mounting your projector. We would now explain these methods.

Projectors can be mounted on the ceiling. A ceiling-mounted projector can be visible or hidden away from sight.

Visible ceiling mounts are often hung up by brackets attached to the ceiling. The invisible ones are tucked up above the ceiling.

As the name implies, these mounts hold your projectors against the walls. The projectors are often placed on shelves attached to the wall.

Even in this case, there are hidden wall mounts and visible ones.

The visible ones can be built to actually add to the design or beauty of your home or projection space.

Some projectors come with specialized stands of their own. These are often pico or portable projectors designed to be used on the go.

For this reason, they come with convenient stands that let you mount them anywhere and anytime.

8 Good Ideas For Where to Mount Your Projector

Here are some ideas for mounting your projector:

1. Hide It Above The Ceiling

Hidden projectors are often tucked above the ceiling. They are hard to spot because they are built right into the ceiling.

They are cradled by motorized contraptions called lifts. These lifts hold them up and lower them down when they are to be used.

With a remote, these lifts slowly descend from the ceiling. Balanced within them is the projector pointing towards the screen.

After viewing, the lift tucks the projector right back into the ceiling.

2. Hang It From The Ceiling

How to Mount a Projector

Sometimes projectors are mounted visibly from the ceiling. You can see them hanging down and angled towards the projection screen.

Special tools called brackets are needed to attach them firmly to the ceiling.

The brackets come in two sections called plates. One plate is to be attached to the ceiling, and the other, to the projector itself.

The process of joining both plates together is the trickiest. You have to make sure the screws are tightened while your projector is angled right.

NB: The major advantage of all ceiling mounts is that they allow you to decide how close to the screen you want to mount your projector.

This ensures you get the best brightness and image quality from your projector.

Read more: 9 easy steps to help you mount your projector on the ceiling

3. Place It on a Shelf Or in a Cabinet

It may be a bookshelf or an unused cabinet. As long as it has enough space and good aeration, you can use it.

4. Hide It Behind a Wall

Just like in the ceiling mounts, you can mount your projector behind a wall and out of sight.

The idea is to have space behind that wall. It may be another bedroom or a closet.

Just build an appropriate stand or cabinet behind the wall to hold your projector.

The only visible part of your projector would be the lens. When in use, the projection beam would shine out through the lens in the hole.

5. Build a Soffit For It

Projector soffits are like wooden box houses for a projector. Most designers of home theater systems use this.

The box is built to the specifications of the projector. It also has enough room and openings to ensure ventilation.

Sometimes, cooling fans are also built into the soffit.

You can design the Soffit to match the interior decor of the projection room before fixing it to the wall.

Like the hidden wall mounts, a Soffit covers up every part of the projector except the lens.

However, it comes with a small door through which the projector can be taken out if the need arises.

6. Build a Custom Bracket Around It

In many ways, these brackets resemble soffits. The only difference is that they are totally open in front.

The projector is visible to everyone but mounted against the wall and bracketed by a wooden barrier.

With this kind of mount, there’s no need for external cooling fans. Heat does not build up.

7. Mount It Behind The Screen 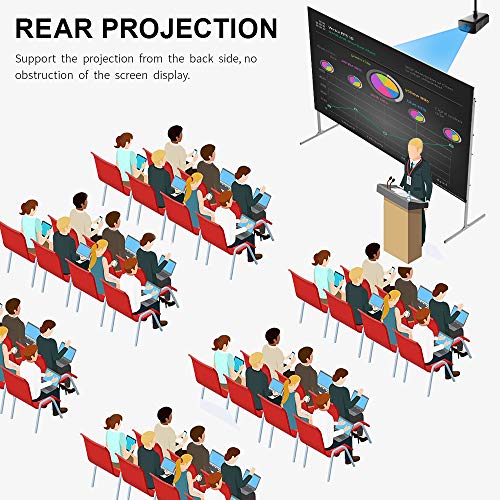 The projector can be mounted on the wall or on the ceiling. Just make sure it is placed behind the screen.

Rear projection screens are transparent. They let viewers see images projected onto them from behind.

The catch is that this method will take up space behind the projection screen. It is only applicable in large rooms.

8. Place It on a Tripod Or Mobile Stand

A tripod stand has three legs. It can be set up anywhere in a room.

The projector is placed on the tripod and pointed towards the screen.

If you use your projector in multiple venues, it is a good idea to get a tripod or mobile stand. They are good for on-the-go projection setups.

Tripods and mobile stands are quite portable. They are great options for small projectors.

Sometimes, these small projectors can also be mounted on a table. This is especially during official presentations.

Lens shift and keystone correction functions allow the user to get a perfect picture from the table or tripod stand.

Pros and Cons of Wall/Shelf Mounts

How To Determine The Best Location To Mount

There are a number of things to consider before mounting your projector. The most important is the projector’s throw distance.

This is a measure of the projector’s distance from the screen while displaying an image of a given size.

This measure tells you how far away from the desired screen to mount your projector.

You have to mount your projector from a distance that can give you the image size you desire. Mounting a projector too far or too close to the wall may give you blurry or small images.

Projectors often come with their throw distances (or throw ratios) specified in their manual.

Here’s how to calculate the best distance for your projector:

Projector throw ratio × Horizontal length of the screen (in inches).

The result is the distance you should put between your screen and your projector.

The measurement should be done from the screen to the center of the projector’s lens.

When you know the distance, you can decide whether to mount on the wall or install a ceiling mount.

Other factors to consider are your lens shift, and the presence of power outlets.

Some projectors don’t have lens shift or keystone correction functions. They should be installed directly in front of the screen to display the picture perfectly.

Before mounting a screen, make sure the wall you’re mounting it on has no light falling directly onto it.

If secondary light falls onto your projection screen, it affects the displayed image. The image may end up looking whitewashed.

After choosing the best wall to mount your screen, decide on the right height. It is best to mount it about 25″ – 30″ above the floor level.

If there are multiple seating rows (like in cinemas) take it a bit higher so those behind the first row can have a clear view.

The best practice is to not mount any of your display screens higher than 15° above your sitting eye level.

Anything more than this may cause discomfort and angling of the neck.

There are many ways to prop your projector against a wall. There are also many options for ceiling mounts.

Your choice should be based on your ideal throw distance. It should also depend on your budget for projector installation.

If you are looking into ways to mount your projector, try one from the 8 listed. Also, don’t be afraid to get even more creative!