Surely there’s a limit to how long a DisplayPort cable can be, don’t you think?

You’re not limited to placing the monitor close to the video source. But can you stretch a DP cable across rooms to a monitor that’s five rooms away?

Just how far can you run a DisplayPort cable, anyway?

Let’s find out below.

Can a DisplayPort Cable Be Too Long?

Yes, a DisplayPort cable can be long.

You may run a DisplayPort up to 50 feet. That’s the VESA-certified range.

You can try cables of varying lengths to see at what distance the signal begins to falter.

When carrying a signal over a long distance, there is a point at which a DP cable will begin to lose data.

That’s where the signal weakens, and it begins to show in the quality of images relayed on the screen.

Sometimes when the degradation is extreme, you get no signal whatsoever.

The only way to tell whether the poor signal transmitting is because of a DisplayPort cable that is too long, faulty hardware, or software error is by using a shorter cable.

If you get a strong signal after connecting a shorter cable, you know that the long cable wasn’t cutting it.

How Long Can a DisplayPort Be Before It Loses Quality?

In fact, VESA acknowledges that DP cables can deliver superb quality up to 50 feet.

Device manufacturers, too, have their own recommendations for the ideal range you can run your DP cable. If the cable length is within this range, it will not lose data.

Normally, they indicate a much shorter range than the distance certified by VESA.

For example, HP encourages you to use cables less than 3 feet (1 meter) long in general.

They state that longer cables could cause screen flickers and unstable images.

And Dell suggests that your DP cables should not be longer than 5.9 feet (1.8 meters).

It can leave you confused when you compare the two and see the substantial difference between them.

The best way to approach the distance versus quality issue is by testing various cables.

Note that the maximum distance varies for each DP cable.

So a different cable might give you a shorter or longer range with which to work.

How Long Can a 4K DisplayPort Cable Be?

For 4K, most DisplayPort cable manufacturers stick to the 50-foot maximum recommended by VESA.

Passive DisplayPort cables do not have this built-in amplifier.

And most can only carry signals over a distance of up to 6 feet (1.8 meters).

A fair number of DisplayPort cables do not have the ‘active cable’ tag, but they can transmit signals up to 50 feet. For that to happen, though, the cable has to be of superior quality.

That requirement alone pushes some manufacturers to use DisplayPort fiber-optic cables  because of their negligible loss rate.

With these, you get almost zero signal loss over the recommended distance.

How Long Is Too Long for DisplayPort?

It’s a bit hard to say that a cable is too long, simply because there is no hard cut-off point in cable length where signal integrity becomes compromised.

It can happen at 15 feet, 30 feet, or 60 feet. It depends on the quality of the cable and whether it meets VESA standards.

That said, if the cable meets all DisplayPort regulatory standards and is certified, you can expect it to project signals up to 50 feet.

You could run the cable a longer distance than that. So it’s a matter of experimenting to figure out whether the distance is too long.

You can tell when you’ve exceeded the supported range because the signal will cut off completely.

So when you connect the cable, your screen will remain black/blank.

With some cables, you may get a signal past a certain distance, but it will not be stable.

What you get instead is flicker, with the screen going on and off.

When that happens, you know your connecting distance is too long.

Can I Use a DisplayPort Extender to Extend My DP Cable?

Yes, you can use a DisplayPort extender to extend your DP cable.

With an extender, the cable will cover a longer distance than it does without the extender.

DisplayPort extenders come in the form of a box-like unit or in cable form. Both types of extenders operate the same way.

Some extenders double as signal boosters .

This type lengthens the distance your DP cables cover and enhances signal strength.

They have equalizer buttons that you can use to adjust the signal. 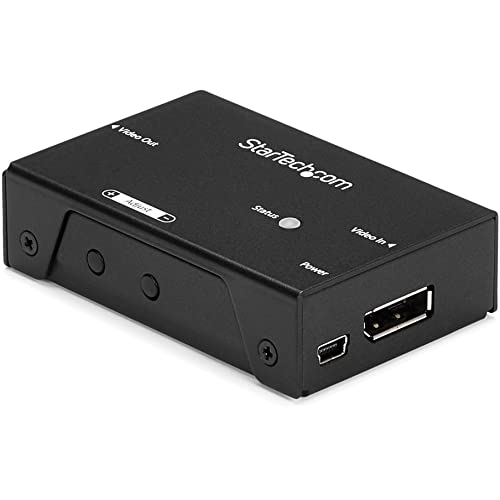 The general rule is: the further apart the devices, the more the signal weakens.

But because we’re talking distances of 65 feet (20 meters) or more, what you’re getting is not such a bad deal.

One notable advantage of using a DisplayPort extender is that it maintains higher video resolutions.

Therefore, you’re sure of receiving 4K images on your screen when you use an extender.

In some instances, the cable will revert to lower resolutions past a given distance. So you end up getting 1080p quality instead of 4K, for example.

Overall, an extender is invaluable in cases where you need to set up the display in a different room.

It’s also convenient in large rooms where the display screen is a distance from the video source.

Below, we show you the step-by-step procedure to connect a DisplayPort extender.

Note: You will need two DP cables of varying lengths. Extenders feature two ports on each end, and each of the ends connects to a DP cable.

The manufacturer explicitly states the cable lengths to use with the extender.

You can use a cable of the recommended length or shorter.

Some people use longer DisplayPort cables than recommended and still get a signal on the other side.

There are no guarantees, however, that this will always work. If you try using longer cables, and it doesn’t work, go back to the specified cable lengths.

Do not switch the cables such that their positioning is opposite to what the manufacturer recommends.

So, here is how you connect the extender to your devices:

Does the extender come with a power connector? In that case, connect it to a steady power source.

You will get the signal on the display screen, where the video should play without a hitch.

For best results, you should run your DisplayPort cable only as far as your device manufacturer recommends.

DP cables are certified to run up to 50 feet.

Going beyond the indicated distance is likely to degrade the video signal. And in the worst of outcomes, you won’t get any signal.

That applies to all video resolutions, including 4K.

There is a way to run your DP cables a longer distance, however. And it involves using a DisplayPort extender.

This handy tool allows you to carry signals across a distance of up to 65 feet or more.