Wireless mice, wireless transmissions, and wireless networks… what do they all have in common?

Technology is adopting ease and leaving the clutter of wires behind. However, many LAN (local area networks) still use wired connections (Ethernet) to transmit internet data.

CAT6a and CAT7 are different categories of network cabling. CAT7 is a more recent release with a higher speed and better signal quality. However, CAT6a is holding its own against the competition because it combines speed with compatibility.

In this article, we’ll explain network cabling in detail. Keep reading to discover the differences between CAT6a and CAT7 Ethernet cables.

What is an Ethernet Cable?

Ethernet cables (also known as network cables) were designed in the 1980s to transmit internet data. They connect routers, network splitters, computers, and other internet-enabled devices on a network.

Ethernet cables are typically flexible but strong. They can be made from twisted copper wires, coaxial cables, or fiber optic cables. The most common type for computer networks is the twisted pair, consisting of multiple wire pairs twisted side-by-side.

Ethernet cables have a square plug on both ends. One end connects to the Ethernet port on the wall, and the other connects to a router or any other device on the network.

There are different categories of network cabling, including CAT5e, CAT6, CAT6A, and CAT7. All Ethernet cables look alike, but if you pay attention, you’ll notice the differences across the various categories.

These cables do not have foil or shielding, leaving them open to interference. Their signal quality leaves something to be desired, but they are incredibly flexible and affordable.

Shielded cables have a braided copper shield that protects them from signal interference and noise. They have a better connection quality than unshielded cables but may be thicker and harder to manipulate.

CAT6a is an augmented version of the CAT6 network cables introduced by the TIA (Telecommunications Industry Association) in 2008 — hence the suffix “a.” Unlike CAT6, an unshielded cable CATegory, CAT6a network cables are eight copper wires twisted into four shielded pairs with high bandwidth capacity.

CAT6a has a 500 MHz bandwidth (which gives it twice the speed of its predecessor, the CAT6) and supports high internet data rates of up to 10 Gbps. It transmits 10Gbps up to 100m distances while CAT6 cables max out anywhere between 35 – 55m.

While CAT6a cables are faster and experience little interference, they are also thicker and more expensive than previous versions. Cables in the CAT6a CATegory are about 2.35mm thicker in diameter than CAT6 cables.

CAT7 cables are high-end shielded cables with four twisted copper pairs. They often have double shielding, which makes them better at preventing signal degradation over distance.

At 600 MHz, CAT7 network cables have a higher bandwidth capacity than cables in the preceding categories. They have a faster transmission speed, supporting up to 100 Gbps data rates.

Compared to the maximum internet speed that internet providers allow (1 – 5 Gbps), you would be right to classify CAT7 as overachieving. Due to their high performance, CAT7 cables are much more expensive than CAT6.

One notable difference between CAT7 and proceeding categories is that its connector of choice is not the RJ-45. Instead, it uses GigaGate 45 (GG45) connectors. The GG45 connector is designed for high-speed cabling. Its ports are compatible with CAT6 cables, but you cannot plug a CAT7 cable into an RJ-45 port.

While CAT6a supports 500 MHz — double the capacity of CAT6 cables — CAT7 cables have a bandwidth of 600 MHz. Due to their bandwidths, they both support high data rates, but CAT7 also supports the highest gigabase at limited transmission distances.

The speed rating of a network cable determines how fast it can transmit available internet data. If an internet provider provides a bandwidth of 5 Gbps and you use a CAT5e cable that supports a maximum speed of 1 Gbps, you would be underutilizing the bandwidth available.

CAT6a and CAT7 cables have a shielded twisted pair structure that allows them to resist interference and crosstalk in long-range transmissions. However, there are some differences in their pattern of shielding.

CAT6a cables usually contain one level of shielding. Either the four twisted wire pairs each have individual shield foils, or all four wire pairs are covered together in one overall shield.

While some CAT7 cables have the same shield patterns as CAT6a, most CAT7 cables are double-shielded. This means that after the individual pair shields, it has an overall foil shield that wraps all the twisted pairs underneath the cable jacket.

CAT6A VS CAT7. What is Difference

This physical difference is due to the fact that CAT7 cables are double-shielded. As a result, they are thicker and harder to manipulate.

CAT7 cables may be more desirable in terms of performance, but if you are on a budget, they are hardly your best choice. They have a higher production cost, so it is no surprise that CAT7 cables are more expensive than CAT6a.

Network cabling categories comply with TIA standards, requiring newer categories to be backward compatible with older ones. As a result, CAT5 – CAT6 cables use the same connector: RJ-45.

However, CAT7 is defined by the ISO, not the TIA. Hence, cables in this category use a different connector – the GG45 – which is better suited to their performance. The GG45 connector port is compatible with cables in other categories, but its plug cannot fit into the RJ-45 connector. 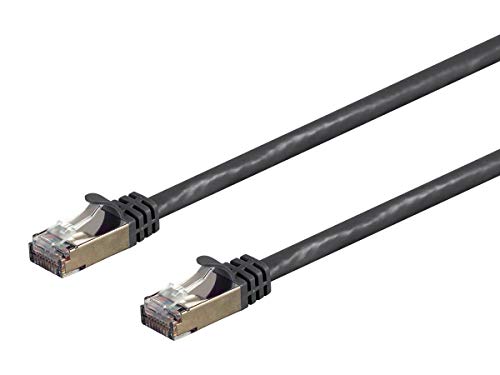 This depends on your network requirements and the compatibility of CAT7 with your devices.

If the upgrade to CAT7 is not necessary, we recommend that you stick with CAT6a cables in the meantime.

CAT7 cables do not comply with TIA standards, affecting their compatibility. CAT7 cables (GG45) are mostly incompatible with the bulk of devices in the market that use the RJ-45 connector.

Comparatively, backward compatibility is a major advantage of the CAT6a cabling system. It is also high-performing and can satisfy the bandwidth requirements for most internet applications.

Industrial-grade CAT6a and CAT7 cables have highly durable physical designs. They can withstand extreme temperatures, moisture, chemicals, and other hazards.

The major edge CAT7 cables have over CAT6a is their capacity to better prevent signal interference. Hence, you can choose one after considering your bandwidth requirements and the cables’ compatibility with your device.

CAT6a and CAT7 are network cabling categories like CAT5e and CAT6. The main difference between cables in different categories is their transmission speed.

CAT7 is an obvious upgrade from CAT6a, but its speed is lost on most internet applications today. Its major advantage over the CAT6a is its better capacity for preserving signal quality in long-distance transmissions.

If you want to upgrade from a CAT6 cabling system, we recommend the CAT6a. It has commendable speed and is compatible with RJ45 connectors.

Gabriella ‘Diogo is a content writer with a vested interest in tech hardware and equipment. She shares her knowledge and processes in an easy-to-grasp, lighthearted style. When she’s not testing or researching device performance, you’ll find her writing short stories or rewatching episodes of her favorite sitcoms.