When working with electronics of any kind, it’s important to know how to be safe. HDMI cables are no exception!

Under certain circumstances, HDMI cables can cause large sparks. The sparks can cause the cable and the surroundings to catch fire.

Knowing what can cause HDMI cables to spark will keep you and everything around the cable safe.

What Can Cause an HDMI Cable to Spark?

Every spark is caused by one thing: electricity. Multiple factors influence how each spark behaves.

A common cause of HDMI cables sparking is an installation error of the TV’s electrical outlet. Too much power, ineffective grounding, and reversed polarities can all cause a  power surge.

Since the HDMI cable is conductive, that power surge will bridge between the TV and the cable, causing a spark.

A spark like this would likely ruin the HDMI cable and the HDMI port on the TV. It might even trip the house’s breaker if the current is powerful enough.

The outlet isn’t always the issue, though. If the circuitry inside the TV is faulty, it can let too much power reach the HDMI port.

This cause is likely to be less destructive, but it’s still cause for worry. Power going where it shouldn’t can easily become worse and ruin the electronics.

Break in the Cable

A much less detectable source of sparks is a break in the HDMI cable.

Even small gaps in the wires of the cable can cause dangerous sparks. Because the sparks form away from the HDMI port, they might not be detected and can become a fire hazard.

The likelihood of sparking is even greater if the wiring of the house is faulty and the HDMI cable gets too much energy.

Protecting Yourself From HDMI Sparks and Fire

With all the associated risks, it’s good to know how to prevent and handle sparks from HDMI cables.

Please note that the methods listed here are relatively safe, but anything involving electricity can become dangerous if you’re not careful!

Always remember that a licensed electrician should be consulted when dealing with outlets and/or the breaker. In either case, always be sure to turn off all power by disabling all the switches in the breaker.

Assessing the outlet your TV is plugged into is the most dangerous of these methods, but also the easiest to find out, especially with the power still on.

Outlets have three terminals on them that carry and transmit electrical current: positive, negative, and ground.

Fixing these issues should only be done by a licensed electrician! The power in household electricity is more than enough to be fatal. 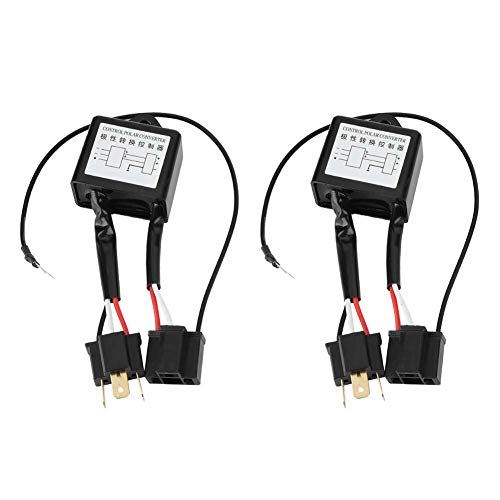 Reverse polarity is when an outlet is wired backward (hot to neutral, neutral to hot). This error is easily detected because the connected appliance(s) will violently spark (which is called an arc fault) upon connection, and the breaker will likely trip. 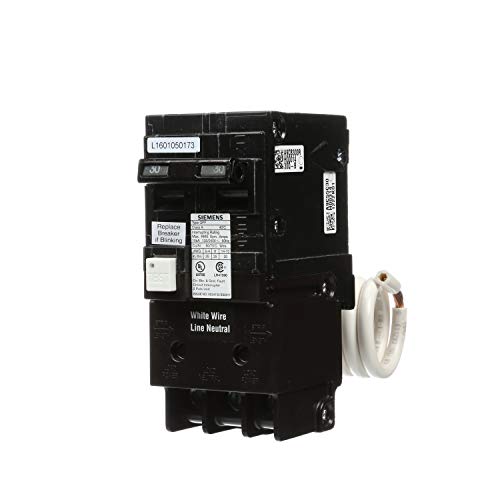 Although it isn’t as quick and may never cause a problem, an incorrectly installed ground terminal is much more dangerous.

Almost all modern household breakers have AFCI or GFCI (arc fault and ground fault circuit interrupters) which use hot and neutral wires to detect dangerous irregularities.

Reversed polarity will cause an HDMI cable to spark and likely damage it, the HDMI port, and the TV. When the ground wire is correctly installed, this won’t hurt the rest of the house or yourself.

This is because the electrical system will detect the arc fault and shut off the respective breaker switch. However, the breaker will only trip if the current is above a certain threshold.

If the ground wire is incorrectly installed, this protection is no longer in place.

A spark from the HDMI cable can be strong enough to seriously injure you and the appliance(s) without tripping the breaker. And without a properly installed ground wire, the current will not stop flowing.

Breaks in the HDMI Cable

A break in the HDMI cable can cause serious issues if it’s not addressed.

Before using an HDMI cable, always check the length of it for any breaks or cuts.

If only the cable’s coating is broken, you can safely fix it by wrapping electrical tape around the affected area.

If the wires inside of the cable are broken, it’s much safer to replace the cable. Even small breaks can cause dangerous sparks if the power surges. 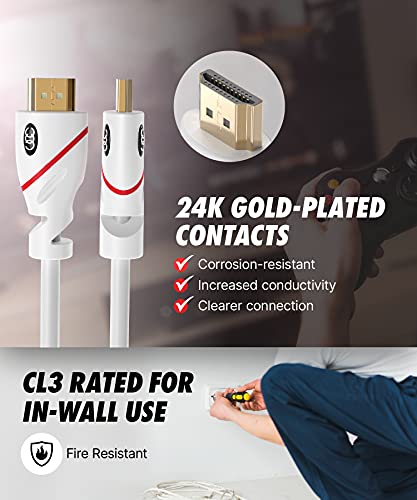 High currents going through wires cause them to heat up. This can cause major problems if the current going through it is not stopped.

It’s uncommon, but the coating around the cable’s wires can heat up to the point of combustion. This can easily cause surrounding objects to catch fire.

An in-wall HDMI cable can also catch fire if other wires spark too close to it.

Choosing the right HDMI coating will keep you safe from potentially dangerous situations. For example, cables carrying large currents and cables behind walls.

Each rating indicates the amount of heat and current a cable can take, how easily the cable spreads fire, and how the cable burns. 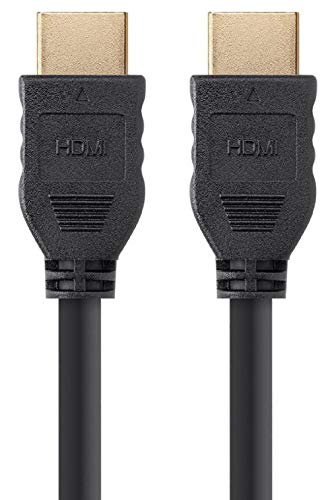 CL2 is designed to withstand a surge of up to 150 watts  and stops fire from travelling along the cable.

CL3 is designed to withstand 300 watts , twice the wattage of a CL2 coating. Like the CL2 coating, it stops fire from travelling along the cable.

CL2 and CL3 are both rated for in-wall usage and are the best to use if more protection isn’t required.

The HDMI versions of CMR coatings are CL2R and CL3R. These coatings are rated for usage in building risers and can be run vertically.

Both types are capable of carrying a higher voltage and are better at stopping the fire from spreading than the CL ratings.

Unlike the others, CMP-rated cables can be run through air ducts . Their voltage capacity varies but they are all designed specifically to reduce smoke from burning.

It’s important to have this type of coating for air ducts to prevent the spreading of toxic fumes and gasses throughout the building.

Can You Put HDMI Cables Behind a Wall?

The confined area, lack of airflow, and density of electrical components behind a wall make cables more susceptible to fires. To prevent fires from starting or spreading, specific HDMI cables need to be used.

Do HDMI Cables Have to Be in-Wall Rated? 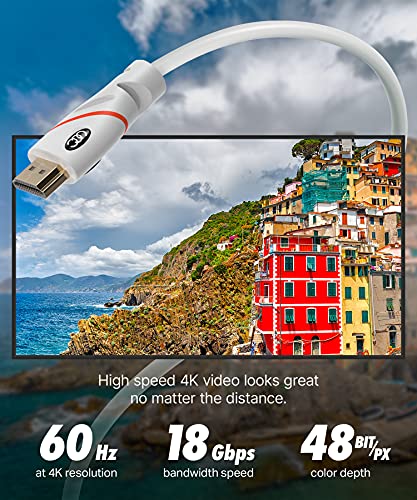 A non-rated HDMI cable meant to be used within the building will not prevent fires or toxic fumes and cannot be used behind a wall.

It is vitally important to ensure that any HDMI cables being run inside a wall are rated for it.

All of the aforementioned fire-rated cables can be used behind a wall. Which one you use depends on the specific circumstances and location.

Areas With a High Density of Electrical Components 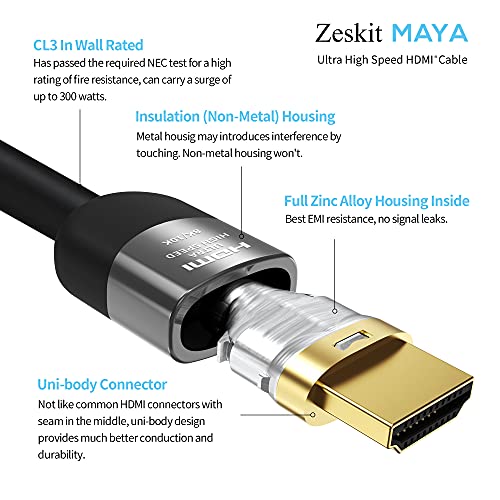 Chances of a fire or sparking increase dramatically when electrical components are crowded in a confined space like a wall.

It’s important to use a high rating like CL3 or CL3R if possible to be certain that the cables will withstand fires and sparking.

CMP cables can also be used because they provide the same protection as CL3(R) ratings, but this is redundant due to CMP cables’ higher cost. 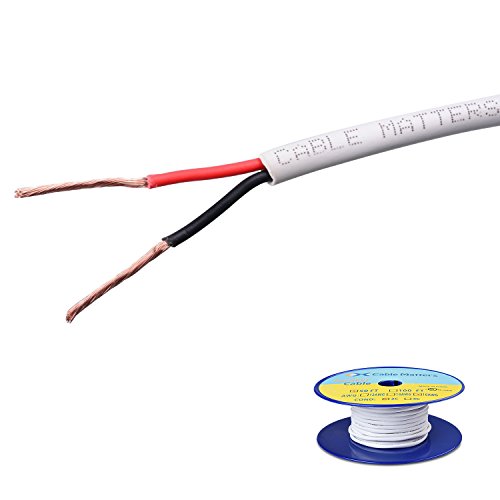 Due to the nature of fire, it can travel quickly upwards if it’s not stopped. So, when HDMI cables are being run vertically inside a wall, the cables must be rated to be run vertically.

CL2R, CL3R, and CMP cables will all work for this purpose. These ratings are designed to prevent fires from burning and spreading along their length better than the CL series.

HDMI cables with a CMP rating will also prevent the release of toxic fumes and gases. 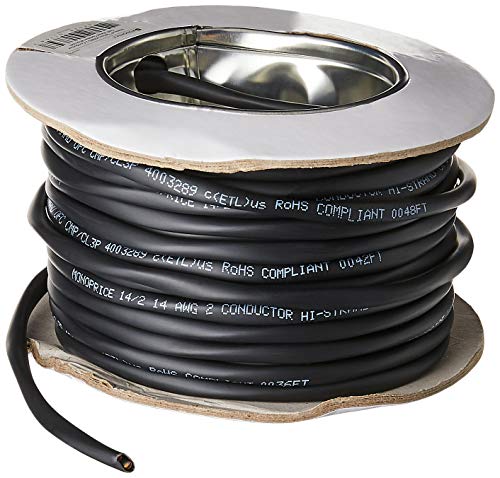 Fires naturally produce an assortment of noxious and toxic fumes as they burn. Rubber cable coatings put off especially toxic fumes due to their carbon content.

When cables must be run inside an area with a lot of airflow like an air duct, it’s crucial to use a coating rated for it.

Of the aforementioned ratings, only CMP-rated cables can be safely run in these environments. Their coatings are designed to hardly smoke and to produce less toxic fumes when they do.

How to Know Which Cable is Right

Even though some cases may look straight forward, there can always be small variables that cause big problems.

The best way to know which type of cable to use is to consult the current version of the NEC.

The NEC will describe in detail exactly what defines each situation and which cables are rated for it.

It may seem unlikely, but HDMI cables can spark and catch fire.

These sparks and fires can be caused by a variety of circumstances. All of these situations involve some kind of error or misidentification of the building’s electrical system.

Most HDMI cables you buy are already rated to be fire resistant, but it isn’t a guarantee. To ensure your protection and the protection of the building, it’s important to know the types of coatings and when to use them.

If you aren’t sure which cable you should use, consult the current edition of the National Electrical Code. It will have the information you need.