In 2020, the average household cable bill was over $200 per month, which caused major cable TV companies to lose 6 million subscribers between 2019 and 2021.

This decrease in cable TV subscribers is encouraged by devices like Google Chromecast that afford users the luxury of extending streaming options to TVs.

The answer to this question is yes! However, not all computer monitors will work seamlessly with a Chromecast.

This article will explore how Google Chromecast works and what computer monitors it works with. Let’s get started!

Will Google Chromecast Work on My Computer Monitor?

Yes, Google Chromecast will work on your computer monitor.

The Google Chromecast device can turn any HDMI-enabled monitor into a smart TV or audio-visual outlet.

Once connected, the Chromecast projects the content of your phone or computer onto the display screen, allowing you to stream videos and audio from an iOS, Android device, or a Chrome web browser.

The Chromecast was not designed to be exclusive to your television. It is capable of working with any display device with an HDMI port.

Limitations of a Chromecast Working on a Monitor

In this section, we’ll discuss the limitations you might encounter using Google Chromecast on your computer monitor.

You also encounter some of these problems using the device on your TV, as there isn’t much difference between using a Chromecast with a monitor and a TV.

Monitor Has No Signal

One technical issue with using a Google Chromecast is your monitor not being able to see the Chromecast device. The first thing to do is restart the monitor.

You can also restart the Chromecast. Unplug and replug the Chromecast into your monitor’s HDMI port, and make sure you select the right input source on the monitor.

Again, you may find that your source devices cannot see your Chromecast when you want to cast to a monitor.

Don’t fret; it is not a problem with the monitor. It simply means that the Chromecast is disconnected from the network.

Not all computer monitors have built-in speakers.

Using Chromecast on computer monitors without built-in speakers leaves you with a soundless video.

When there are no built-in speakers, we advise you to use an HDMI audio extractor.

Audio extractors allow you to send sound to a separate audio system without tampering with the HDMI video quality. 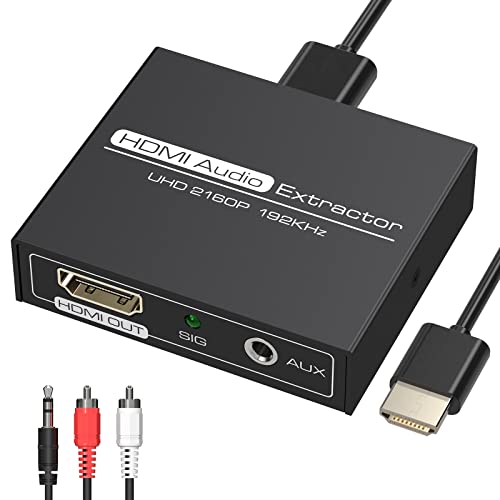 Not all monitors are HDMI-compatible. Some monitors only have VGA, Displayport, DVI, or USB-C ports.

The Chromecast device is only compatible with HDMI ports. This is a major stumbling block for people who want to use their Chromecast with an older monitor.

There is a workaround!

You can use a converter that changes HDMI to whichever connector is available on your monitor. For example, HDMI to DVI  or HDMI to VGA  converters. DVI and VGA do not transmit audio, so you need a converter that also has a separate audio output port.

However, it is important to note that you may face pixelation when using a Chromecast with an older non-HDMI monitor that has a low native screen resolution.

Other Devices That I Can Plug My Chromecast Into

Aside from using Chromecast traditionally with a TV, your HDMI-enabled computer monitor is a close substitute.

The Google Chromecast was designed to cast content on an extra screen. So, any display device with an HDMI port should work.

You can also connect your Chromecast dongle to a projector. Modern projectors have multiple HDMI ports and built-in speakers.

Chromecast with Google TV also works with AVRs. You can connect your Chromecast to the HDMI input on your AV receiver.

How to Connect Chromecast to AVR Surround Sound

Is your monitor your last resort for watching your favorite shows on a big screen? Don’t worry. Google’s Chromecast may work with your monitor.

The best part is that Chromecast isn’t limited to TVs and computer monitors. If you have a projector, you can plug in your Chromecast and enjoy!