It’s no news that projector screens can get much bigger than even the latest and most advanced flat-screen televisions.

And, likely, TVs will never be able to get as big as projector screens. If they eventually catch up, they will cost an arm and a leg, and the projector screen would have gotten even larger, keeping its lead intact.

After all, making a bigger projector screen is a lot easier and inexpensive than designing and building a television with a massive screen.

Suppose you are transitioning from a TV or buying a projector as a secondary video entertainment device. In that case, you may want to know how those seemingly mammoth dimensions translate in real life.

How Big is Your Projector Screen?

Projector screens come in a wide array of sizes, and the differences between consecutive sizes could be night and day. So, how big are these screens in actuality?

P.S. None of the projector screen sizes mentioned below are ideal for your bedroom, except if your chamber is much more spacious than the standard American bedroom (132 square feet or 11 feet by 12 feet). 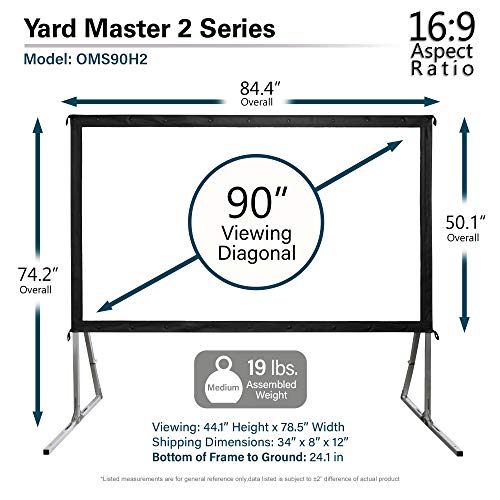 A 90-inch projector screen is not “massive” compared to other projector screens mentioned below, but it’s still bigger than most popular big-screen TV offerings, which usually fall in the 65–85-inch realm.

A 90-inch screen would feel more like a giant TV than a big-size projector screen since canvases for a projector can get much bigger than that, and 90 inches is still relatively close to traditional large TV territory. 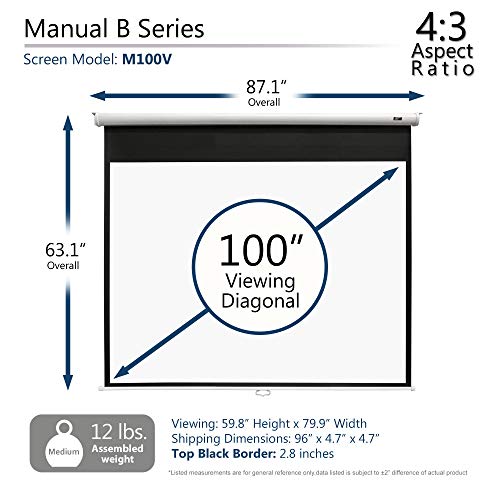 Though just 10 inches bigger, a 100-inch screen will make those few additional inches count – particularly if a 90-inch or smaller screen or TV feels significant to you already.

A 3-meter distance from the screen is recommended.

(More on how to calculate optimum viewing distance later in the article). 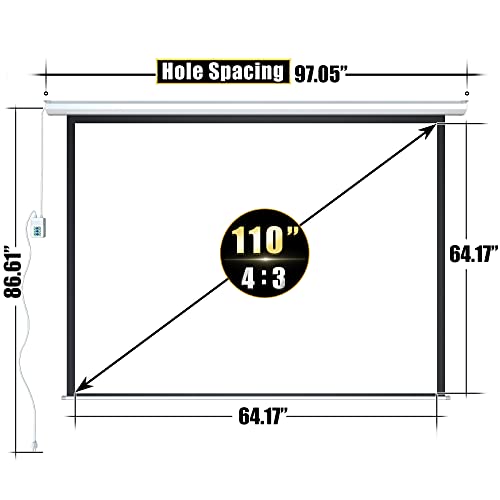 We recommend you make the highly praised Silver Ticket Products STR Series 6  the 110-inch, 16:9 projector screen of your choice.

With 110 inches of the canvas, you are unofficially entering “movie theater” territory.

Of course, commercial theater screens are much bigger, but the 110-inch screen gives you the same feeling.

Here is a video that shows how a 110-inch looks and performs in a dedicated setup:

You may have succeeded at accommodating a 90 or even a 100-inch screen in your bedroom with some modifications.

However, fitting in a 110-inch screen in the room wouldn’t be feasible. You would most likely require a dedicated entertainment space.

If your living room or bedroom is big enough, the screen could blend in well.

But it’s recommended you keep the inches below 110 if you’re looking to install a projector screen inside a non-dedicated projector space. 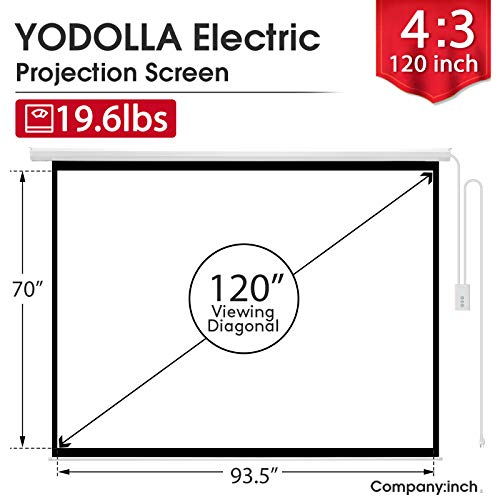 With a 120-inch screen, you are ready to head outdoors.

It’s not ideal as there are much bigger screens, but you are getting your foot in the door (or outside the door) with a 120-inch screen.

This size is also best suited for 4K viewing.

The Yodolla 120-inch Motorized Projector Screen  and the Mdbebbron 120-inch  are our recommendations in this size category.

A 150-inch screen pretty much cannot be set indoors. You would have to head outdoors with it—at least partially, like how it’s shown in the video below:

A 150-inch screen helps replicate the movie theater experience for a small gathering.

As stated above, it’s best to set up outdoors. You can certainly go bigger than 150-inch, but you don’t have to.

Big is Not Always Better

A screen that fills your field of vision is the ideal big-size screen.

But because people do not understand their visual field well enough, they can easily end up buying a projector screen that’s bigger than it should be.

Here’s a video explaining how to get the correct screen size and aspect ratio concerning your field of view:

How to Choose The Best Home Theater Screen Size

Here are two significant issues that could arise when dealing with a projector screen that’s a bit too huge:

A screen that’s too big could be challenging to consume in its entirety.

You might end up moving your head sideways while viewing the content – similar to how spectators seeing a tennis match sideways end up doing.

Not to mention, the need to move your neck muscles could cause strain and make you lose interest in using the projector.

A bigger screen would increase the size of the pixels, causing the image to look pixelated or not clear.

A projector with a 4K resolution, such as the BenQ TK800M  or the BenQ HT3550 , would not pose any pixelation concerns.

But clarity would be an issue if you purchase anything with a lesser resolution, including a native 1080p projector that can scale up to 2K or 4K.

Not All Same-Size Projector Screens Work Out Evenly

Besides the fact that a bigger projector screen doesn’t necessarily translate to a better viewing experience, different same-size projector screens also do not perform identically.

In other words, a few other things need to be considered.

As mentioned earlier, the screen’s aspect ratio determines how big or small the projector screen gets.

Projector screens come in different formats or aspect ratios, which include:

The first two screen formats (16:9 and 4:3) are the most common. Older TVs had the 4:3 ratio. Most HDTVs (current-gen televisions) have embraced the 16:9 aspect ratio.

The first number in the aspect ratio denotes the screen’s width. The second digit signifies the height. For instance, a 16:9 screen indicates the screen will be 16 feet wide and 9 feet tall.

Quite obviously, 16:9 is only the ratio, and it doesn’t mean all projector screens adhering to it would be or need to be that big.

If the 100-inch screen conforms to another aspect ratio such as 4:3 or even 1:1, its physical dimensions will change, or it would look big in a different way.

A 16:9 screen is best suited for watching TV shows and sports.

While it’s not impossible to play widescreen content on a screen with the 4:3 or even the 1:1 configuration, you’ll have to live with the black bars at the top and bottom of the screen.

The black bars will remain if you watch movies on a 16:9 aspect ratio screen since films are made with a 2.35:1 balance, particularly the newest ones.

If you are buying a massive projector screen to watch movies alone, it’s recommended you purchase a CinemaScope screen since you’ll get the best bang for your buck.

If you are considering using the projector screen to play other forms of content, a 16:9 screen is your best bet.

The 4:3 and 1:1 formats suit classrooms, lecture halls, slide projections, or any place where increased flexibility is needed to accommodate varied video formats.

Compared to a 16:9 aspect ratio, a 4:3 screen requires more vertical space, which is why it’s more suitable outside the home or in business or academic settings.

The 16:9 ratio strikes the right balance between the 4:3 and CinemaScope, which is why it’s the most popular (if the product links above were not indications enough).

Another significant aspect to look at when considering a projector screen is the aspect ratio your projector supports.

The projector’s positioning and flexibility with movement or portability also ascertain the correct screen size and format.

For example, a fixed or set-into-place projector won’t work with a 4:3 or 1:1 format screen.

If the screen is a bit too big, the projector may not fill the screen.

Then there’s also the issue of brightness or the projector’s ability to illuminate the screen entirely.

If the screen is too big for the projector’s lumen output, the brightness levels could be greater at the center and faded at the peripheries.

How Far Should You Be Seated from the Screen?

You can attain the best big-screen experience with a projector if the setup is backed up by good audio and proper seating.

Good seating is not just about the physical nature or comfort of the chairs or the couch but also how far they are from the screen.

To ascertain the optimum distance from the screen, measure its size diagonally and divide it by 0.84.

If your seating has been set up for a 50 or 60-inch TV, you would have to make some adjustments to accommodate the much bigger projector screens.

Kindly note, the optimum viewing distance or the computation method is not standard or set in stone. It could slightly vary based on who you ask.

Unlike TVs, projectors don’t just get bigger, but they provide a lot more aspect ratios to play with as well.

A TV is stuck with HDTV, which could be limiting. A projector screen is, therefore, worth it—both for the size and aspect ratio variations.

But because it’s easy to buy a projector screen that’s bigger than you might truly need, it’s imperative to understand how large a given projector screen actually gets and how well it fits in your space or adheres to your requirements.

This article hopefully gave you that perspective and some guidance.