Electrical surges are becoming far too common, whether it’s lightning striking your home or your washer tripping a breaker. Keeping home appliances, including your treasured television, safe and operating smoothly should be of utmost priority.

But then again, you may be wondering just how much damage power surges can do? Should a surge protector be on your list of worries as far as keeping your TV safe is concerned?

An electrical surge can damage your TV. Depending on how bad the power surge is, it may only cause minimal damage, such as an HDMI port no longer working. It can also completely fry your TV to the point that you can no longer operate it.

A surge protector, therefore, is important as it adds a layer of protection to your TV. The last thing you want is to have regrets when just a little preparation could have saved the day.

To find out more about electrical surges and TVs, read on!

What Is a Power Surge?

Electric surges are sometimes referred to as transient voltage. A power surge is simply an unexpected increase in voltage.

This increase can be strong enough to damage appliances attached to the circuit, which sadly may include your TV.

There are two different types of power surges: internal and external.

The majority of household power surges are internal. The main cause of these internal power surges is when the motors of home appliances start or stop diverting electric current. Often these appliances need a lot of power to operate.

You may notice at times that your lights flicker immediately after you turn on or off powerful devices such as an air conditioner. Such devices require a lot of electricity, and this puts stress on the grid, which can cause a power surge.

What Is a Surge Protector For?

The main purpose of a surge protector is to detect any excess voltage and divert it into the grounding wire.

All surge protectors have a pin connected to the ground. This is normally the third prong found on a plug.

Typically, surge protectors use metal oxide varistors (MOVs) to absorb any excess AC voltage, allowing only the acceptable levels of electric current to reach your appliance. High voltages can damage your electric wires, cables, and ultimately, your device.

Think of the flow of an electric current like water running through a pipe. Just the same way water moves from a high-pressure point to a low-pressure point, electricity operates in a similar way.

Electricity moves from an area of high electric energy to one of low energy within the wire.

However, when this voltage increases for a minimum of at least three nanoseconds above the norm, there could be a power surge that has the potential to damage your device.

This is where a surge protector comes in to divert this excess voltage.

Do I Need a Surge Protector for a TV?

If your answer is your TV, then you need a surge protector.

TVs have intricate microprocessors that can easily get damaged by power surges if not well protected.

How To Choose a Surge Protector for My TV?

You may find it challenging to get a suitable surge protector for your TV at a good value.

How do you choose a good surge protector? And are there any important features that you should be looking out for?

Let’s look at the basics that you should consider when choosing a surge protector for your TV.

The UL 1449 Underwriters Laboratories is the recognized safety standard for all Surge Protective Devices (SPD).

This rating guides the design requirements, certification criteria, and product performance testing that all the manufacturers must adhere to for surge protectors to be considered safe for consumer use.

Surge protectors have a limited lifespan based on how hard they work. While the surge protector might be properly diverting power surges, it is also suffering damage during the process.

Joule rating (the higher the better)

Take it as a shield blocking excess energy. The higher the joule rating, the more surge voltage the protector can absorb, whether in a single event or over a series of surges before wearing out. 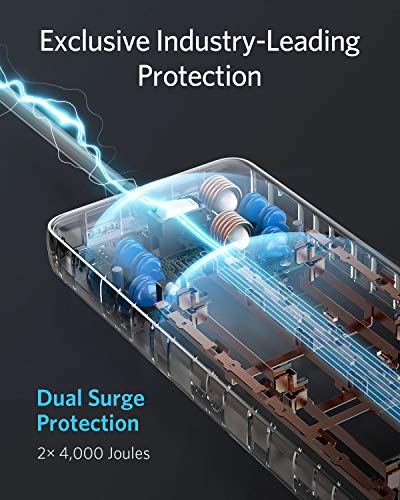 Clamping voltage (the lower the better)

This is a measurement of the voltage at which the surge protector will be prompted to redirect excess electricity from the plugged-in appliances to the ground connection.

This means that a surge protector that has a clamping voltage that is lower will trigger earlier and protect your television quicker. The lower the number, the less tolerance to excess voltage.

A surge protector that comes with a clamping voltage that is below 400 volts should be good enough to guard your TV. 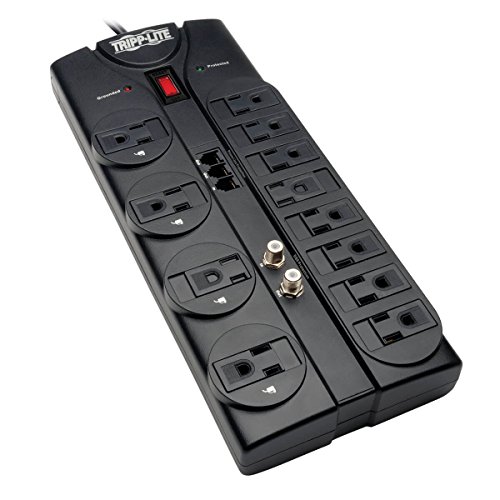 Response time (the lower the better)

Response time goes hand-in-hand with the Voltage Protection Rating. Response time explains the duration it takes the protector to detect a surge in voltage and react to divert the excess voltage.

Surge protectors with lower response times will activate faster and redirect any excess voltage before there is major damage to your TV. Response time is measured in nanoseconds.

For the best results, choose a surge protector with response times of one nanosecond (or less).

Some surge protectors come with an additional safety feature, the automatic shutoff. This safety feature powers down the TV when there is a power surge or voltage spike.

This prevents electricity from reaching your TV entirely if your surge protector becomes inadequate.

It is therefore wise to choose a model that comes with a lifetime replacement warranty, as well as insurance to cover repairs or replacement of your connected equipment, including televisions, damaged by power surges.

Power surges can be unpredictable. While you can try as much as possible to manage the risks from inside your household, you can not control mother nature.

So to protect your television against power surges, get a surge protector .

This is the only way you can prevent damage to your television caused by power surges from both inside and outside your home. Without it, you may be exposing your television to damage down the road.