You’re getting ready for a big work presentation, complete with several detailed charts and graphs.

You decide that pointing a yardstick at the TV screen to direct your audience’s attention to certain points is a little elementary.

Could you, perhaps, use a laser pointer instead?

Will any laser pointer work?

If not, what kind of laser pointer should you use on a TV screen?

Why Can’t You Use Traditional Laser Pointer on a TV Screen?

Traditional laser pointers will not show up on your TV screen.

At the most basic level, laser pointers are bright streams of light. While they may appear bright on a wall or printed presentation, their light will not be as clear on a television screen.

This is because TV screens are also emitting a considerable amount of light, outshining the laser pointer’s light. This will make your laser appear dim and difficult to see.

Additionally, many TVs are fitted with a polarizing film. This film has anti-glare technology, blocking any external light (e.g. sun rays, lamps, overhead lights) from creating a glare on your television screen.

Since your laser pointer is an external light source, your TV’s anti-glare film will block it, absorbing its light and preventing it from being clearly seen.

What Is a Digital Laser Pointer?

So, unlike traditional physical lasers which shine an external light on your TV, digital lasers allow you to highlight items on-screen by spotlighting a certain area of the screen.

They’re designed to work with LCD and LED TV monitors, displaying a spotlight or a small pointer (depending on the laser) without the need for an external light source.

The laser’s color, size, and transparency can be adjusted according to your needs and preferences.

Digital laser pointers are rechargeable and connect to your TV via a small USB dongle, making them completely wireless.

Many of them also come with apps allowing you to customize the laser pointer’s features.

Which Laser Pointer Will Work on a TV Screen?

Digital lasers will work with a TV screen.

You may also find that traditional laser pointers aren’t as effective on projector screens due to the excess light, especially if you’re using a type of light-rejecting screen.

Some powerful, ultra-bright traditional lasers will show up on your TV screen, but these harsh lights can damage your TV.

So, while digital lasers may be a bit more expensive, they will save you in the long run since you won’t have to pay to repair or replace your TV screen in the near future.

Since many cooperate meeting rooms are swapping their TVs for projectors, this is a great added bonus.

So, now that you know you need a digital laser pointer to use on your TV, it’s time to get shopping. But where should you start?

Lucky for you, we’ve found our top two recommendations for digital laser pointers.

Let’s learn about them! 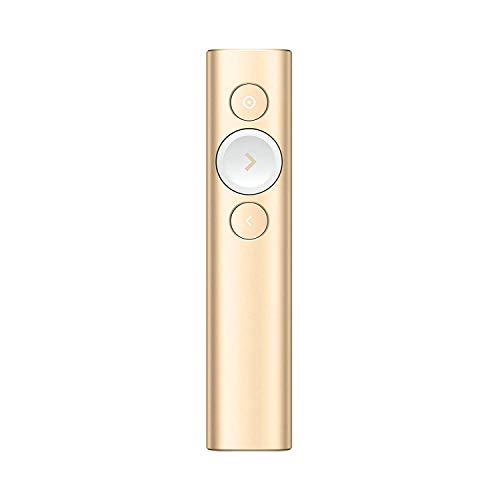 Whether we like it or not, appearance matters, especially during important business presentations. So, why not make sure your remote matches your sleek and modern appearance?

The Logitech Spotlight Presentation Remote is chic and stylish, comes in gold or black, and has the capacity to elevate your presentation significantly.

It can keep its charge for up to three months, so you don’t have to worry about it randomly dying in the middle of your meeting.

This laser pointer also has a range of 30 meters (or 98.4 feet), making it a great choice for presentations held in spacious auditoriums. It’s also completely wireless, so you can move freely around your room.

Instead of allowing you to point to objects on-screen with a cursor, this remote highlights an area of your screen. Not only will this allow you to direct the audience’s attention to wider areas of your presentation, but you also won’t have to worry about the cursor blocking any important information on-screen.

The most notable thing about this remote is its time management feature, which vibrates the remote, alerting you when you’re running out of time. The vibration is discrete, so only you will notice it.

These alerts can be custom-set in the remote’s accompanying app, allowing you to customize the remote to your needs.

Finally, it comes with a USB dock for the USB dongle, so you’re less prone to losing it. 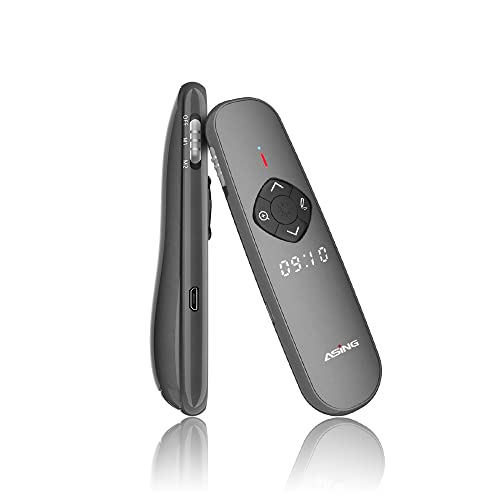 Do you want a digital laser remote that can do it all? If so, then the ASiNG Advanced Digital Laser Presentation Remote is for you!

Presentations are stressful and, if you’re anything like me, your bouts of anxiety are manifested through forgetfulness. Lucky for you, this high-tech remote’s USB dongle also has extra storage!

This means you can upload your presentation files onto the remote’s dongle and open them directly on the TV, so you only have to remember to bring the remote and dongle with you.

Like the Logitech remote mentioned above, this remote also has a time management feature. However, this one allows you to precisely track how much time is left by displaying a digital countdown on the remote.

The ASiNG remote has two modes: pointer and highlight. The pointer mode functions similarly to a traditional laser, displaying a red dot on-screen.

Highlight mode illuminates one area of the screen and allows you to even zoom in, which is perfect for detailed or busy diagrams.

Long gone are the days of clumsily leaning over your computer to draw an icon on-screen or play a video!

This digital laser has a pencil and air mouse feature, allowing you to draw on-screen and click on icons.

This is great if you want to draw your audience’s gaze to particular items by circling them on-screen or open and play videos during your presentation.

So, while it may not be as stylish as the Logitech remote, its many features make it incredibly efficient.

Will a “Physical” Laser Pointer Mess Up a TV?

In addition to not showing up on your TV, traditional physical laser pointers can actually damage your TV.

There are several classes of lasers, which are separated by their brightness and power.

Lasers with a wattage of 5 or higher are brighter and, when pointed directly at your TV screen, can cause damage to the screen.

The laser’s bright light can burn your TV’s LED pixels, causing them to die. Dead pixels, which appear black and do not illuminate, are almost impossible to fix.

Not to mention, the repairs can cost you hundreds of dollars.

So, to play it safe, only use digital lasers on your TV. The digital laser will be clearer and easier to see and, as an added bonus, will not damage your TV screen.

Does Logitech R800 Work on a TV Screen?

No, the Logitech R800 Laser will not work on your TV screen.

While this remote does wirelessly connect to your TV, it is not a digital remote since it shines a physical light onto your TV screen.

As discussed, external light sources are not very visible on TV screens. So, you will most likely struggle to see it on your LED or LCD TV.

Additionally, this physical laser’s light could damage your TV screen.

Instead, it’s best to stick to a digital laser, such as the ones listed above.

To make matters worse, it’s unlikely you’ll even be able to see them clearly, especially if your TV screen is fitted with an anti-glare film.

Instead, we strongly recommend using a digital laser pointer.

These new and improved laser pointers wirelessly connect to your TV or monitor, allowing you to point at or highlight items on-screen without shining a damaging light on your TV.

Not to mention, they come with time management, air mouse, and magnification features, which can help elevate your presentation and make it run smoothly.

So, say “goodbye” to the red laser pointer of the past and “hello” to the sleek, digital laser pointers of the future.

Your coworkers won’t only be impressed by your high-tech presentation aid, but they’ll also be relieved you aren’t damaging company televisions by shining a bright laser at them.

We have made a full review about best laser pointers for many use cases that you may find useful here: https://pointerclicker.com/best-laser-pointers-complete-reviews-with-comparisons/

You have done a great job on laser pointer. Mostly people is just purchasing a laser pointer that it's not working on screens.

You made some good points there. I did a search on the issue and found most people will satisfy with this content.

I agree, normally a laser pointer will not be so bright on a LCD screen. Instead people can purchase a digital laser pointer. I'm about to publish an alternative solution for the laser pointer on LCD, LED screens.