If you’re anything like me, you’ve placed your Wi-Fi router directly beneath your TV. They’re both important electronics, so doesn’t it make sense that they should be next to each other?

But lately, you’ve been noticing that your TV’s signal is a little choppy and your Wi-Fi is slower than usual.

Could your Wi-Fi router be interfering with your TV and vice versa? Is it okay to put a Wi-Fi router next to or behind a TV?

If not, what’s the best place to put a Wi-Fi router in a house?

Can a Wi-Fi Router Interfere With a TV and Vice Versa?

Yes, Wi-Fi routers and TVs interfere with each other.

Wi-Fi routers and TV antennas heavily rely on their signals, which travel through the air.

So, placing both of these devices in the same location can cause their signals to clash, preventing them from arriving at your router or TV.

In fact, CRT TVs emit high levels of EMF which kills signals over wide areas, and may even affect your neighbor’s signal reception too!

This may cause your Wi-Fi to be slow and your TV’s picture to become choppy.

The Wi-Fi signal may also have to go through the TV’s metal hardware to reach the router. This breaks up the signal as metal blocks the Wi-Fi’s path from the Wi-Fi tower to your home.

Additionally, the Wi-Fi may interfere with your TV antenna’s signal, disrupting it on its way to your TV.

Smart TVs can also interfere with your Wi-Fi signal as they connect to the internet and stream content. Streaming consumes a lot of data and bandwidth, and you may notice your Wi-Fi isn’t as fast as it usually is on your phone or other devices.

How Far Should a Router Be From a TV?

Your Wi-Fi router should be five to six feet from your TV.

As a rule of thumb, place your Wi-Fi router at least five to six feet (1.5 to 1.8 meters) away from your TV and any other devices which could interfere with the signal, such as your microwave.

These electronics disrupt your Wi-Fi signal by interfering with its signal waves.

Should I Hide a Router Behind a TV?

No, you should not hide a router behind a TV.

Placing your Wi-Fi router behind your TV may seem like the obvious choice, especially if you’d rather keep the ugly router and cables out of sight.

It can also stifle your TV’s signal if the TV antenna is nearby, making it difficult to watch satellite or cable TV.

You should also avoid placing your Wi-Fi router next to or directly beneath your TV.

What Else Interferes With Wi-Fi Signal Strength?

Several other objects in your home can interfere with Wi-Fi signal strength.

Now that we know that TVs can interfere with signal strength, let’s take a look at what else may be causing your signal to buffer or lag.

You may think that moving your Wi-Fi router closer to the wall will make the signal stronger in the next room, but you’d be wrong.

Walls made of brick and concrete are hard for Wi-Fi signal waves to pass through, as they’re both thick and dense.

This is why it’s often difficult to ensure your Wi-Fi signal reaches all the rooms in the house.

The same logic applies to flooring. Floors made of concrete will block the signal from one story to the next.

You may find that you need to purchase a Wi-Fi extender box to boost the signal. Still, your internet will never be as fast as it is when you’re sitting in the same room as the router.

Microwaves use electromagnetic rays to heat your food. While mostly contained inside the microwave’s compartments, these rays can dribble out.

So, when these rays collide they interfere with one another, often stopping your Wi-Fi from working.

The good thing is that your Wi-Fi should go back to normal once your microwave is turned off.

However, if you frequently use your microwave and are finding the interference unbearable, consider moving your router five to six feet away from it.

Who doesn’t like the magical sparkle that fairy lights create? They take any room from drab to fab, but did you also know that they can interfere with your Wi-Fi signal?

Luckily, you can place your router several feet away from the lights to decrease interference.

So, if you’re cuddling up by the tree and struggling to stream a Christmas movie, try moving your router away from the Christmas lights.

Do you use Bluetooth headphones and speakers during Zoom calls, but find it difficult to hear and understand your colleagues and friends?

Well, your beloved Bluetooth devices could be hindering your Wi-Fi signal!

This is because Bluetooth connects devices wirelessly by “frequency hopping”. This method of connectivity involves the connection “jumping” the 2.4 GHz band (i.e. the same frequency Wi-Fi uses).

This, in turn, causes your Wi-Fi to lag.

So, the next time you’re getting ready for an important virtual meeting, ditch the Bluetooth headphones and opt for some wired headphones instead.

Do you live in a crowded apartment building? Do you have several Wi-Fi routers in your home?

Several Wi-Fi routers in one place can cause a decrease in signal strength. Each router is fighting for the strongest signal, which leads to all of them experiencing delays and you struggling to connect to and browse the internet.

What Is the Best Place To Put a Wi-Fi Router in a House?

It’s best to place your Wi-Fi router in a central, high position.

So you’ve sorted out all those pesky interferences and are ready to find the best place to put your Wi-Fi router.

First, you want to ensure your router is in the center of your home. You may have heard that placing a Wi-Fi router next to a window will boost your signal strength, but this is nothing more than an urban myth.

A Wi-Fi router emits a signal in all directions, so by placing it next to the window you’re losing a good chunk of your internal signal outdoors.

Instead, try to place it in the center of your home. However, avoid placing it in a long hallway as the walls and floors will stifle the connection, delaying its arrival to any of your rooms.

You should also consider placing it up high, like on a table, shelf, or ledge. This is especially important if you live in a two-story home as it will make it slightly easier for the signal to go from one level to the next.

Some Wi-Fi routers even come with wall mounts, allowing you to place them high up on the wall if you don’t have any tall furniture in your home.

You may also want to avoid placing it next to a wall you share with your neighbor, as their Wi-Fi router will slow down your internet signal.

You must also position the Wi-Fi router antennas correctly.

If you live in a one-story home and have a dual-antenna router, having both antennas pointing up should be sufficient. If you’re covering more than one floor, position one antenna at a 45-degree angle.

If you have a router with three antennas, ensure the middle one is pointing up while the two outer ones are bent outwards at a 45-degree angle.

For routers with four antennas, have the two middle ones pointing up and the two outer ones tilted at a 45-degree angle.

If you live in a particularly spacious home, we recommend investing in a Wi-Fi extender, like the Hyzom WiFi Extender Signal Range Booster , which can extend your router’s range by 7,000 square feet (650 square meters).

These nifty gadgets plug directly into a wall socket, so you place them around your home to help extend the signal. Many of them also have an Ethernet port, so you can plug your device directly into it and experience an ultra-fast wired internet connection.

However, if it does not have an Ethernet port, you will need to place it close enough to the router so it can get a good Wi-Fi signal.

You can also try using a mesh router, which is one hub that connects to your Wi-Fi router and then sends internet all over your home via its nodes which are placed around your house.

Many mesh routers support up to 30 nodes, giving you a great range. They’re also very fast, so you can enjoy high-speed internet even if you’re far away from the router.

If you’re interested in getting a mesh router, check out the Amazon eero 6 mesh Wi-Fi system . 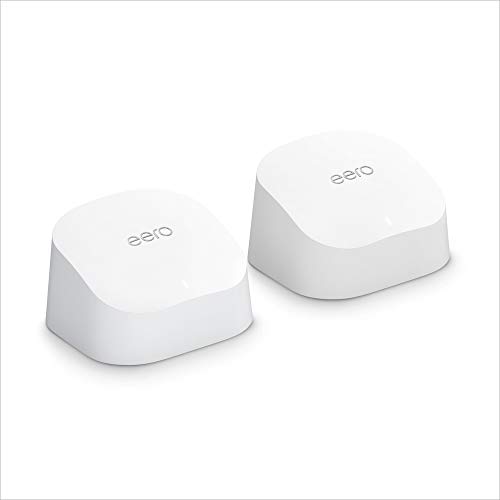 If you’re unsure of how strong your Wi-Fi signal is, check out Speedtest.net, which analyzes your internet speed and gives you a report.

Though every home will require a different speed based on the size and how many people are living there, we recommend an upload speed of 10 Mbps and a download speed of 100 Mbps.

Watch the video below to learn more about where to place your Wi-Fi router in your home.

8 Tips for Positioning a Router | Where to Place Your Router

Finding the best place for your Wi-Fi router can be tricky.

However, finding out which devices and materials in your home interfere with signal strength can help you get one step closer to achieving super fast internet speed.

Remember to keep your Wi-Fi router away from your TV and try to place it in the middle of your home on a tall shelf or table.

If parts of your home aren’t receiving any Wi-Fi signal, consider using a Wi-Fi signal booster.

What’s your experience placing a Wi-Fi router near a TV? Did you know that so many things could interfere with your Wi-Fi signal strength?