If you’re considering getting a 4K monitor for your work or gaming setup, go ahead. You will benefit from gazing at visuals a lot clearer than on a 1080p or even a 2K screen.

But to truly enjoy the splendor of a UHD screen, all the cogs in the 4K wheel must work in cohesion. Your monitor cannot accomplish the task by itself, even if it’s the most high-end of its kind.

When you play non-4K content, the monitor has to play ball. It cannot display content in a small section of the 4K screen, leaving the surrounding space unoccupied.

Like 4K TVs, computer monitors also do upscale. But in some scenarios, you may want the monitor to accomplish the opposite or play the content in non-native resolution.

Why would someone want to do that? And is dialing down the resolution of a 4K monitor even possible, to begin with?

Read on to find out more.

Can You Play Lower Resolutions on Your 4K Monitor?

Yes, you can play lower resolutions on a 4K monitor.

If you’re playing content that isn’t 4K (1080p or 1440p) to begin with, your computer’s GPU and CPU shall carry out the necessary processing to accommodate the low-res content automatically.

While the above may sound convenient, be prepared not to be blown away by the visuals.

And also, brace yourself for some aspect ratio or content size disparities. Luckily, you could rectify those concerns quickly.

Why Would Someone Play Lower-Res Content on a 4K Monitor?

Before addressing how to lower resolution on a 4K monitor the right way, let’s first address the question most people may have on their minds, “Why would anybody want to play lower-res content on a 4K monitor?”

Isn’t doing that defeating the point of a 4K monitor?

At first, wanting to lower the resolution of a 4K monitor may seem absurd. But, after you start to dig in, you’ll unearth some valid justifications.

Most content produced (as of 2022) is still shot in 1080p. Although there’s a significant shift to 4K production in recent years, the transition is still pretty much ongoing. It may take a few years.

Until then, use your 4K monitor in the Full HD avatar and scale up the resolution on an ad-hoc basis or as and when required.

A monitor that’s 24 inches or smaller will not utilize 4K the way a bigger-screen monitor would. Or the visuals may not look sharper than 1080p content.

Since 4K streaming or gaming can take a toll on any system, it’s logical to put that burden on your computer hardware only if the results are there to be seen.

You may argue if that’s how 4K works, one shouldn’t have bought a 24-inch 4K monitor in the first place.

Although there’s nothing incorrect about that thought, there’s a sure bump in picture sharpness or quality when watching content on a 4K screen, regardless of its size.

Even smartphones have a 4K screen, such as the Sony Xperia 1.

Therefore, though 4K showcases itself the best on big screens, it’s not a complete fail on small displays.

Even though several buyers have been gravitating toward 4K monitors, most aren’t upgrading their computing hardware yet.

Quite a few continue to use computers that cannot process 4K content—particularly 4K gaming. Desktop PCs that are five years or a decade old still exist.

To run 4K game graphics, a hefty PC with a robust video card to boot is essential, and computers of yore are very unlikely to be equipped with one.

You may also need HDMI or DisplayPort cables up to snuff for the task. For instance, to stream 4K content at 60 Hz, you’ll need an HDMI 2.0 or a DisplayPort 1.4 cord or greater.

Here are some we’d like to recommend for both standards: 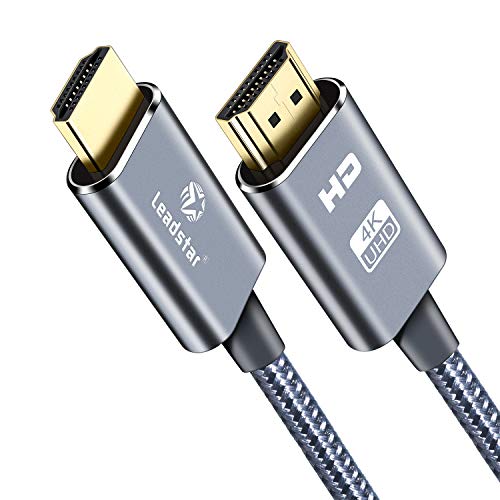 Lowering the resolution of the 4K monitor helps claw back some performance or renders the computer usable. Or you can get things done with your limited hardware arsenal, not having to purchase new accessories or a new computer altogether.

Though 4K gaming has its positives, 1080p gaming is not outright shabby—not even close.

4K gaming is a luxury that you need only if the granularity of the game’s graphics is paramount to the overall experience or could determine the game’s outcome.

Since 4K gaming is still pretty much in its infant stages, there are inherent issues with it. quite a few games act like half-baked software.

Most game developers realize jagged gameplay may hamper their 4K offerings. They, therefore, allow gamers to scale down the resolution to 1080p natively or in the game’s internal settings, which helps iron out those kinks.

Won’t downscaling 4K to 1080p lead to aliasing or jagged edges? It may, but those irregularities shouldn’t be as much of an eyesore as before.

Most modern games come equipped with anti-aliasing functions that shall smooth off those rough edges. SMAA (subpixel morphological antialiasing), for instance, is an anti-aliasing technique that helps.

What the Heck Are MSAA, FXAA, SMAA, and TXAA?!

Kindly note that supersampling is not the demon some like it to be projected as. It is still quite effective, provided you could back it up with the raw power of a high-end computer.

Quite a few modern games offer SSAA in their settings.

How Does Low-Res Content Look and Perform on a 4K Monitor?

Generally, 1080p content looks better on a 4K monitor or TV than it would appear on a native 1080p screen of the same size, thanks to the processing the 4K display carries out in the back.

However, there are a few caveats.

Though all 4K monitors have the innate ability to downscale and upscale, not all of them do the job equally well.

If you’re gaming, the lower resolution will, in return, provide more frames per second to play with.

Compromises in Visual Clarity Cannot Be Ruled Out

If visual clarity is critical to the gaming or general viewing experience, there could be setbacks in that regard.

Since you are likely to sit closer to a 4K monitor than a UHD television, you may be able to detect the pixels, hampering the overall experience.

The higher the decrease in resolution, the more significant the impact on the visuals.

For instance, playing 480p, 720p, and even 1080p content on a 4K monitor could be pretty detrimental to the experience.

Some games could lose visual details considerably, resulting in blurry or blunt images.

And if it’s a bigger monitor, such as a 32-inch, the loss in visual clarity would be a lot more discernible than a smaller 24-inch 4K monitor.

Can You Change the Resolution on a 4K Monitor?

Yes, you certainly can change the resolution on a 4K monitor.

The monitor’s native resolution or 3840 x 2160-pixel arrangement will remain or cannot be altered.

As explained below, you may manually set the monitor to play all content at a lower resolution.

How to Change the Resolutions on a 4K Monitor?

To change the resolution on your 4K monitor, head to the monitor’s “Display Settings”.

Here are the steps:

The changes shall take effect instantly.

A pop-up window shall appear seeking confirmation. You may click on “Keep changes” or “Revert”.

How to Resize Window Sizes?

Everything looks extra-sharp on a 4K monitor, and you may fit in multiple windows on the same screen. That also means small texts.

Texts usually look tiny on a 4K monitor at default settings. And if the screen is 27-inches or bigger, the struggle becomes very real.

Thankfully, there’s a solution, or you may scale things up.

Click on Start, then Settings and Accessibility. On the Accessibility page, click on the “Text size” option under “Vision”.

Click on and hold the blue dot next to “Text size” and drag the scaler. Once you’ve selected the right size, click on Apply to effect the change.

The window resizing comes in handy during gaming.

That is when changing a 4K game’s resolution to 1080p within the game’s settings results in a shrunken image or when there’s a 1920x1080 image at the center of a UHD screen, with unoccupied space surrounding that visual.

Windows 10 - How To Change Screen Resolution and Size

4K content and monitors are now pretty much the standard.

After the first 4K monitor was released in 2013, the pace picked up, and many manufacturers have been churning out UHD monitors ever since.

The newest gaming consoles from Sony and Microsoft are also 4K-ready, besides handling 120 FPS at that high a resolution.

If you’re out in the market looking to buy a monitor for work or games, grab a 4K monitor—even if you intend to play lower resolution content on it.

Since 4K is the future and because a UHD monitor can handle 1440p or Full HD content with almost no trouble, buying a Full HD monitor is akin to staying in the past—except for if the monitor is 24 inches or you’ve got an excellent deal on a 1080p monitor.