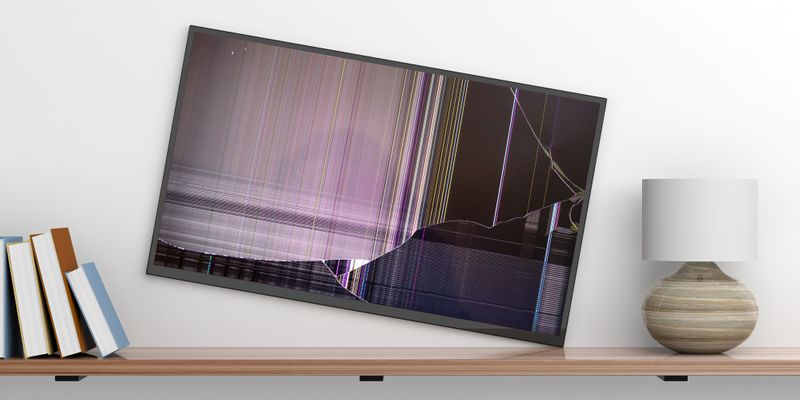 A TV falling off its wall mount is anyone’s worst nightmare.

A television breaking contact with its mount is not a rare phenomenon. But the occurrence is not very common either.

Most people, therefore, are not concerned about that possibility. The mere thought itself never crosses their minds.

But because a TV can fall off its mount, ignore the same at your peril.

But then why do TVs fall off walls in the first place? Was the TV too heavy for its brackets, or was the mount not correctly installed? Or could there be some other reason?

Continue reading to find answers to those questions and more.

Why Did My TV Fall Off the Wall?

When your TV is wall-mounted correctly, it’s highly unlikely to fall off. That means it’s likely due to wrong mounting techniques or tools and possibly a few other things when it does fall off.

Here are the primary reasons:

TVs usually come with wall-mounting brackets in the box. Although the mounts are custom-made for the TV, the quality doesn’t need to be excellent by default.

Even the build, fit, and finish of the brackets that tag along with $1,000 or $2,000 TVs are not a given. And when you use those brackets, your TV will fall in the future. Therefore, it pays to buy a mounting bracket separately if needed.

Irrespective of the brand, there are high-quality brackets for various TV brands and sizes. The Mounting Dream UL Listed TV Mount for 37-70-Inch TVs  is one. If your TV is bigger and heavier, look at the Home Vision Heavy Duty Fixed TV Wall Mount  for mounting support.

Overlooking the Specifics of the Wall

The wall you mount your TV on could be a solid brick, stud, or dry-lined wall.

Solid walls are made of brick and concrete primarily and throughout. As a result, they don’t sound hollow when knocked on. That also means they are load-bearing and structurally sound.

Stud walls are plasterboards secured to metal or wood studs. That means there are gaps between the studs, which feel hollow when tapped on.

Unlike solid walls, these walls aren’t meant to bear loads but only serve as dividers or partitioners within a space. They, therefore, are not ideal surfaces to mount a TV.

Dry-lined walls are also plasterboards but attached to bricks using an adhesive. These walls, too, aren’t strong enough to hold on to a TV, but they perform better than stud walls.

Although drywalls are rated to support TVs weighing up to 100 pounds (45 kg), the brittle nature of the wall could warrant added support for the mount in the form of load-supporting kits such as the GripIt Drywall Anchor Fixing Kit .

The possibility of your TV falling increases considerably when the wall mount is not anchored to one of the studs in the wall.

Luckily, some tools help detect the exact placement of those vertical bars, such as this Craftsman Stud Finder .

Regardless of the tools you use and the precautions you take, mounting a TV into drywall or a wall with studs is always risky. So, tread with caution.

Sometimes, the bolts used may not be suitable for the particular wall type or mounting job. The bolts, such as M8 bolts, must be at least two inches (50mm) long. A thicker wall would require a three-inch (80mm) wall.

Before deciding on the length, check how thick the wall is. The last thing you want is the screw to come out from the other side.

Ensure the wall plug used is suitable too. Good-quality plugs are usually made of high-quality metal or nylon.

Some TVs may come with wall plugs and screws as part of the packaging. If your TV is missing both, look for plugs based on material, thickness, length, etc., here.

While at it, do not forget washers, as they assist in spreading the load.

Wall-mounting a TV is not rocket science. But you may do a shabby job if you don’t know how to do it.

Watching a couple of tutorial videos on the internet and reading up on some stuff may offer you clues, but it would be too risky to attempt a TV installation based on that knowledge alone.

It’s, therefore, best to leave the work to a professional or someone handy with DIY stuff. The right person would know where to set the mount on the wall, how to screw in the bolts and lock them in place.

When you have no real experience wall-mounting TVs and still choose to do it yourself, the implementation is likely to be sub-par. And with sub-par execution comes increased possibilities of the TV falling flat on its face.

If the TV is mounted where it frequently interacts with things, such as the door touching the TV when it opens, the TV mount loses its bearings over time, eventually coming off in due time.

Also, kids playing with the pivoting or flexible nature of the mount is a recipe for disaster.

How do you prevent kids from coming near the TV? Do not have toys, food, or anything kids like close to the TV. With the TV’s vicinity clear and devoid of unnecessary stuff, your kids have little to no reason to come near the TV set.

Not Checking in on the Installation Later

If your TV is mounted on a flexible stand or you cannot avoid frequent contacts, check the state of the mount occasionally.

Even if your TV stays relatively untouched, checking in on how the mount’s doing is recommended to err on the side of caution.

With usage or the accumulated effect of holding the TV, the screws can come loose. And when left unchecked, the bolts may come off and cause the entire setup to collapse.

Checking in on the screws and tightening them when needed can prevent the catastrophe. The screws loosening is more likely with drywall. With solid brick walls, bolts coming out is rarely an issue.

Things to Ensure Before Wall-Mounting a TV

When adhered to before mounting a TV, a few things can go a long way in preventing catastrophes.

Most modern televisions are light, particularly compared to the cathode ray tubes of yore. But there’s still some heft to them. An 85-inch TV, for instance, would typically weigh more than 100 pounds.

Why learn your TV’s weight? So you can choose the right mount. A fixed mount can handle a bigger, heavier unit. But with pivoting brackets, the weight-bearing capacity goes down.

Also, the fastening tools, anchors, and other equipment used must be rated to support your TV’s weight. When you know how much your TV weighs, choosing the right tools becomes easy. Check your TV’s user manual to learn specifics.

Pull At the Mount

After having screwed in the mount, do a pull test. If the bracket doesn’t move and feels sturdy enough, it’s ready to hold a TV securely.

But don’t pull at it vigorously, for you could damage the bracket or the wall itself.

Above, we discussed the types of walls in homes. But the discussion about walls doesn’t end there. You must consider the actual condition of the wall as well.

A wall that’s old or disintegrating from within may not hold on to your TV, even if it’s a solid brick wall.

The age of the house is an obvious giveaway of the wall’s condition, but it may not be conclusive.

Visually inspect the wall. If it looks worn or aged, restore it before mounting your TV. If the house is relatively new and the wall seems spotless, that’s your green light.

But to be safe, a proper inspection would help, particularly if you’ve moved to a house built and occupied by someone else.

Should you wall-mount your TV or table it?

It depends on the setup and your requirements. Not mounting the TV to the wall would be ideal if you need to reach behind the TV to access its ports now and then.

If you’re short on space and don’t have furniture to lay the television on, a table or stand is most likely not an option.

Regardless, do not let the possibility of the TV falling off the wall determine how you set up your TV. TVs pedestaled on furniture are equally susceptible to being knocked off if kids or pets are in the house.

A TV almost never breaks off its mount and crashes down. It’s usually the wall mount coming off and taking the TV down too. Therefore, pay close attention to the wall you’re mounting your TV on.

If you’re unsure what you’re doing or not very handy with tools, get an expert on board or someone who has had wall-mounted TVs multiple times before.

A brand-new TV comes with wall-mounting installation services. Those are usually free or part of the purchase. Even if it’s not, use those services.

The last thing you want is your TV to descend and break for good because you couldn’t care less about its installation.