Plasma TVs used to be all the rage in the early 2000s. From TV ads to pop-culture references, they were a technological and cultural phenomenon.

It’s safe to say that, at one point, they were the focal point of any luxurious entertainment system.

So why were they discontinued?

We’ll look at the reasons why plasma TVs fell out of favor with consumers and eventually stopped being produced altogether.

1. Lack of Variety in Size

At one time, plasma TVs’ large screen size was a big selling point.

Old TV model designs, like CRT, limited how large the screen could be. This was due to the internal tubing which made it impossible to elongate the screen any further.

Needless to say, plasma TVs were a huge hit when they first came onto the market.

While an 80-inch screen may be some people’s cup of tea, others wanted a more moderately sized TV to fit their space.

Plasma TV manufacturers’ lack of variety in size only catered to those who wanted to go big or go home, and it cost them dearly.

As we become more accustomed to seeing high-resolution content on our TVs, laptops, phones, and projectors, 1080p begins to look fuzzy. Considering that plasma TV screens were quite large, it was easier to see the picture resolution’s imperfections.

Compared to the latest TV models, plasma TVs were relatively dim. It was difficult to clearly see the picture in a sunny room, making daytime TV watchers strain to watch their favorite shows.

The main reason for this is that plasma TVs are illuminated via xenon and neon gas cells. Although this made it unnecessary to include a backlight in the TV design, the picture wasn’t as bright.

Compared to modern TVs which are backlit, the overall brightness was dimmer, making the colors appear less vibrant.

To make matters worse, consumers began to notice that their plasma TVs dimmed even more over time. There was also an issue with the brightness fluctuating, becoming very bright for one moment only to dim the next.

You can still find instructional videos (like the one linked below) released by plasma TV manufacturers online, guiding consumers on how to fix this recurring problem.

In the same breath, the plasma TV’s image would begin to take on a red hue. Although a red screen may look great with some films’ color schemes, it was mostly a nuisance and consumers complained.

As other TV models began delivering ultra-bright screens like never before, plasma TVs faded into the background.

There’s no way around it. Plasma TVs did not age well.

The screen dimming and becoming tinted red usually happened within the first year of use.

It’s important that appliances, especially expensive ones like plasma TVs, stand the test of time. Most consumers would have expected one of their home’s big-ticket items to be durable and last several years without the need for replacement or repair.

Instead, people began to see their TV’s brightness and coloring change within months of purchasing it.

The TV’s black and white levels also fluctuated, with some brands’ becoming darker while others become lighter.

People also began reporting that their TV screen was peeling away from the unit. Yes, peeling.

While some manufacturers offered to fix the problem for free, the peeling screen only pulled back the curtain on why plasma TVs became an unpopular choice for consumers.

They used a third more energy than other TVs, with the smallest units coming in at an incredible 139.5 Watts and the largest screens consuming a whopping 500 Watts. To put this into perspective, that’s as much energy as a refrigerator uses!

On the other hand, LED and LCD TVs only used about 91.5 Watts.

Their high electrical consumption also fostered growing concern about their impact on the planet and people began seeing LED and LCD TVs as a more eco-friendly alternative. 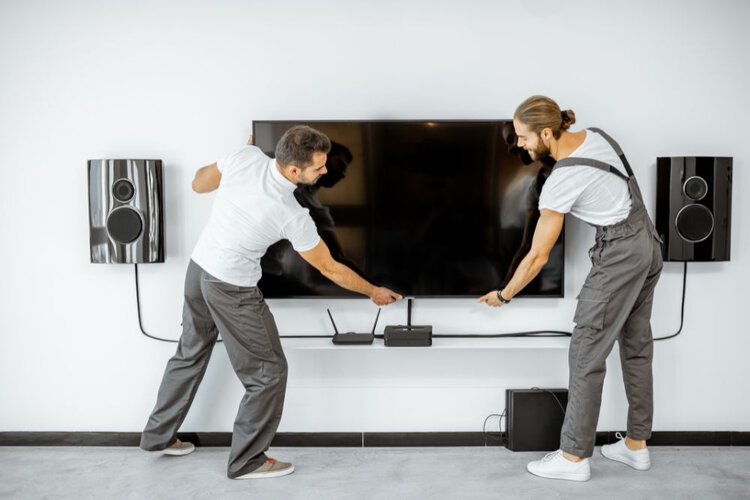 Plasma TVs are generally on the thicker side, making them a bulky addition to anyone’s living room. They’re also heavy, with a 55-inch screen weighing in at 52.9 pounds (or 24 kilograms).

This makes them heavier to transport and more difficult to mount against a wall since the mount needs to be able to support the extra weight.

Reflective screens can make watching TV during the daytime or in ambient lighting difficult since the light from the sun or any external sources will create a bright spot on the screen.

Unfortunately, this was a common problem experienced by plasma TV owners as they struggled to see the screen when not in total darkness. The reflective screen was a result of it being made of glass, a naturally reflective material.

Combined with the screen’s dimness, the TV’s overall picture quality was generally poor.

Phosphor trails commonly appeared on plasma TVs during fast-paced movie scenes. They are characterized by green shadows following, or trailing, the character’s movements.

This would leave random green streaks across your TV screen and was most visible during black and white films.

This is a result of the TV screen being unable to keep up with the content it’s showing and stabilize the quickly changing light and dark areas of a scene.

Couple this with the plasma TV’s overall red hue and you’ve got yourself a pretty wonky looking picture.

Have you ever changed the channel and had whatever you were watching before burned into the TV screen? If the answer is “yes,” then you’ve probably owned a plasma TV.

This occurred because of the TV’s phosphorus gas dissolving in an irregular pattern and usually happened when you paused an image with large black areas or watched a movie framed by black vertical or horizontal bars.

These black areas would remain on your screen even as you flipped through the channels and were most visible when watching brightly-colored content.

Plasma TV manufacturers were aware of this problem and had built-in settings to fix burn-in, such as making the screen completely white to wash out the dark areas.

Although these solutions often worked, it would only take watching a high-contrast scene to burn the screen again.

Ultimately, plasma TVs had their moment in the 2000s, but like most technologies, they were eventually outshined by the brighter, clearer, and lighter LED TV.

LED TVs come in a variety of sizes, are backlit to make them bright, and have a high picture resolution. They also consume less energy and are long-lasting, so you won’t need to replace them after a year of use.

In short, both the consumer and manufacturers came to understand that LED TVs resolved all of the plasma TV’s shortcomings.

Once expensive to manufacture, LED TVs became cheaper to produce and purchase, making them the obvious choice for anyone looking to spruce up their home theater.