Who doesn’t like a sale! Sales are enticing. Some people buy products they do not need purely because those are available at discounted prices. And if a product they’ve had their eyes set on for some time goes on sale, the greater is the inner push to splurge.

Projectors, like every other consumer product, can be bought for a lower price. But because projectors are not your “typical” consumer electronic item, most of the offers and discounts on them fly under the radar.

The projector-savvy is likely to be well-informed and not miss a deal whenever one pops up. However, the regular buyer could have trouble hunting for the right deals. If the latter sounds like you, read on.

Do Projectors Go on Sale?

Projectors do go on sale, usually during the festive or holiday season (the end of the year). On Black Friday, Cyber Monday, and other days designated to crazy sales periods, almost everything sold under the sun (physical or digital) is sold for lower prices, including projectors.

But since projectors do not have the “mass appeal” some other electronic goods carry, their deals do not headline the sales. You’ll have to scour the web or a particular e-commerce site to find deals on projectors.

Projectors available for reduced prices are invariably devices that didn’t sell well during their initial run. Also, when companies come up with newer versions (which is not every year or to a schedule), the prices of older models drop to accommodate or justify the costs of the newer devices.

Do not expect massive price cuts, however. The offers may not be as attractive as the discounted prices smartphones, laptops, and smartwatches usually sell for in the sale.

It’s not uncommon to see a projector selling for the same price it was sold for a year ago, even during a sale — particularly if those projectors have been praised by the community (of users and experts) and a newer version hasn’t been released/announced.

Projector companies aren’t incentivized enough to cut their prices because the economy of scale is not there. Some even care less about sales periods and approach the season like any other time of the year.

Why are Projectors Usually Not Heavily Discounted?

There are legitimate reasons why projectors do not get heavy price cuts as their direct competitor, the TV, and more popular electronic goods.

A projector is not your mass consumer product. In other words, the market for projectors is a lot smaller compared to televisions.

What that means is when people look to upgrade to a larger screen, they immediately think of a bigger TV and not a projector, despite the latter being a lot more capable at churning out more prominent visuals.

Companies often launch their new projectors with little to no fanfare and without any pre-release teasers or feelers. Spending huge money on marketing a product that will not sell in hordes or be an impulsive purchase is perhaps the reason behind the somewhat lackadaisical marketing.

Smartphone adverts, for example, are pretty standard in conventional media (TV, newspaper, magazines, etc.). But when did you last see an ad for a projector on TV?

Projector adverts are not that hard to come by in print and digital media, but the marketing push is still not robust enough.

Why is a projector not popular already?

Perhaps, the general consumer believes projectors are solely for businesses, or maybe because setting one up is more of a chore or requires technical chops.

There are multiple pieces to the projector puzzle (installation, display screen or wall, ambiance or proper lighting, audio, the primary device, etc.) that the average consumer either has no idea about or doesn’t want to put up with. That is particularly true with a more user-friendly TV available as a purchase option.

A TV plugs and plays once the initial setup is done. While projectors could also be installed permanently, the work involved is relatively rigorous and time-consuming. Also, TVs do not generate noise as projectors do.

Adding salt to the wound is the lengthy upgrade cycle of projectors. Unlike a smartphone, projector users do not wish or find the need to upgrade to a newer device every year or two.

Projectors are more about the hardware and less about their software. In other words, it’s pretty standard for an old projector to run the same OS for years together. With no OTA (over-the-air) updates, manufacturers cannot cripple the older devices or burden old hardware with the latest software.

All of that translates to companies not refreshing their projector lineup every year or two. The older projectors stay relevant, and their prices, therefore, do not go down as much. When a new model is slated for release, talks of price cuts on the existing line tend to simmer.

A user invariably buys a new projector only when their current device is plagued with issues, not repairable anymore, or when they’ve held on to a projector long enough for the latest offering to seem like a real upgrade.

Projectors are Not “Status Symbols”

A projector isn’t the only electronic item that people do not upgrade regularly. The majority of buyers hold on to their smart TVs, laptops, cameras, etc., for a fair while too.

Smartphones and smart wearables are anomalies because they’ve assumed the “status symbol” tag. They are visible to the onlooker or are extensions of people’s personalities.

People do not carry their projectors around, except for portable ones. Even then, the layperson doesn’t understand projectors enough to make the owner feel they are holding on to a relatively old device and must do an upgrade.

For instance, the Anker Nebula Capsule  could wow the uninformed, who may not know the device has already had its successor, in the form of the Nebula Capsule II .

The same individual may perceive two individuals – with one carrying the latest iPhone and another sporting a non-Apple smartphone – differently due to Apple’s image in the general consumer’s mind.

How to Learn When Projectors Go on Sale

As mentioned above, projector sales periods are not publicized heavily as the marketing won’t justify the eventual sales realized. Therefore, do not rely on traditional advertising to keep you informed.

Sign up with forums dedicated to projector discussions, launches, etc. Besides projector geeks like you, industry experts and company representatives could also be active in those online communities.

Companies genuinely concerned about how their products are faring or the buyer sentiments toward their product could be seen monitoring such forums and fielding grievances.

The redressal process may inadvertently divulge some titbits about new launches or impending price cuts on existing models.

Also, sign up for email newsletters of projector companies. Each time the brand is gearing up for sale or has discounted prices on the current line, you’ll be intimated.

When Should I Buy a New Projector?

Buy a new projector any time you feel the need to buy one. Do not wait for the sales season or a price drop because it may simply not come around.

The festive or holiday season could be an excellent time to buy a projector if you insist on buying a projector for a bargain. Like all other companies, projector makers too could reduce the prices of their devices and launch new products with introductory offers.

The festive period is also when prices of previous-gen projectors get a price cut to make way for their newer versions or justify the latest projectors’ high price tags.

But, like discussed above, do not be too hopeful.

Should You Buy a Projector New or Used?

The theory behind buying a  used device is cost savings. But because projector prices are relatively stable, a used projector deal is not going to be your “steal deal.”

Therefore, if you can buy a new projector for its full retail price, go ahead. But if saving a few bucks truly matters, a used projector is worth consideration.

If buying a new projector, do not buy it on the very first day of its sale. Let the excitement around the device reduce to a sputter and check out the preliminary reviews. Once you are sure the projector is right for your needs, swipe your card.

While you can always get a new projector repaired or replaced under warranty, it’s still something you would not want to go through. The disappointment of a brand-new projector failing to perform to expectations could leave a bad taste in your mouth.

Things to Consider When Buying a Used Projector

A used projector is worth its asking price if it’s well-maintained and not too old. Following are the things to tick off before you buy a used projector:

If a projector has been used extensively and a new bulb is required, add the lamp’s cost to the projector’s price and ascertain whether it’s still worth the purchase. It doesn’t make sense to buy a used projector if a replacement lamp costs more than half the price of the projector.

It’s More Than Just the Lamp

You can replace a projector’s lamp, but a used projector with a new bulb doesn’t mean a wholly revamped device. If the projector is too old or used extensively, it could have developed hardware concerns that may not be rectifiable, or the repair cost could be outright expensive.

A projector lamp is one of the many components that deteriorate with use — and the bulb is the easiest to deal with.

Most projector owners know a good amount about projector lamps. Still, they don’t realize the device has a few other consumable parts, including cooling channels, fans, polarizing plates, etc.

If you’ve replaced the consumed bulb on a used projector and the device still doesn’t work as desired or doesn’t turn on, one or more of the above components could have failed.

A Refurbished Projector is a Better Deal 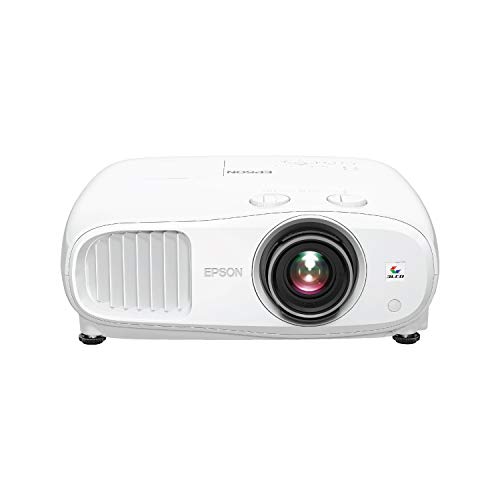 If you’re sure about going the “used projector” route, you might as well look at refurbished projectors sold directly by the manufacturer — primarily for the warranty they come with.

A used projector over a manufacturer-backed refurb device makes sense only when the former is relatively new or still under warranty. If the used device’s warranty period has expired, a refurb would be the better choice, regardless of how good the used projector looks and performs.

Refurbished projectors that come with a year or more warranty are pretty much new devices the original buyer could have returned during the return period. That means the lamps in them could have clocked a few hours.

Check out theseEpson Home Cinema 3800  and the BenQ HT2050A  refurbished deals. If you are an Epson fan and want more choices, the company has listed quite a few refurbished projector deals here.

If you are looking to buy a projector, don’t be on the lookout for a sale. It’s worth buying a new projector because the device usually lasts the distance and holds its value (to a great extent).

A used projector is a sensible purchase if you are frugal. But don’t opt for “ancient” projectors or the ones not covered under warranty anymore. You could end up spending more on its repairs than you might have saved on the initial outlay.

A factory-refurbished or renewed projector is a better choice any day, even if that means spending a few additional bucks.