Your projector can come with many connection ports. These ports serve different functions.

Audio input, video input, connection to other devices, and charging are some of their functions.

VGA and HDMI are two frequently used connectors for transmitting video signals. Sometimes, they are both present in one device.

While they have similar functions, they have unique features.

Have you wondered which is better for you to use? Well, we explain that in this article.

You’ll learn which connector is better for your intended use. First, let’s explain both connectors in detail.

Your projector comes equipped with connectivity ports. These ports act as interfaces between the projector and other devices.

Any part of your projector that can be connected to a peripheral device is a port. These connections are made with cables.

On the projector, the ports serve many purposes including:

You may want to project movies or games. How do you find the right one for receiving video files to your projector?

Projectors come with many ports for video transmission. Some of them are:

This article focuses on the VGA and HDMI ports. By the end of the article, you should be able to decide which one works best for you. 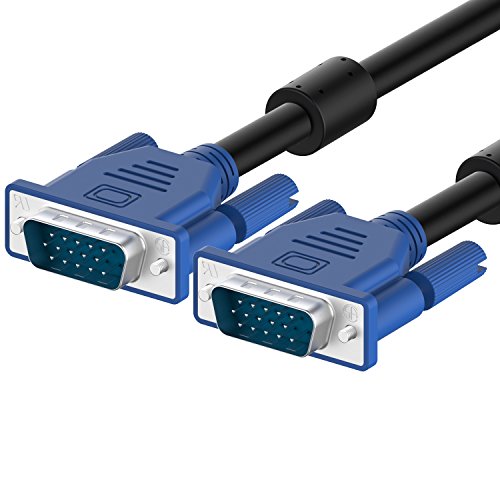 A VGA connector is relatively old. It is still quite useful, so you may have to use it at some point.

VGA stands for Video Graphics Array. This connector is used to connect computers to your projector or other devices.

It supports up to HD 1080p, if the projector can display that. You only have to be ready for some loss of quality.

Analog video interfaces have been in use much longer than the alternative. They’re still common in DVD players and VCRs.

They involve a lower amount of data. As a result, digital connections have a better image quality.

With this connection, your projector receives analog RGB signals from the connected device.

The VGA connector can’t transmit audio signals. That means you will need a separate connection to receive audio.

On your projector, you can connect the AUX port to the connected device. This will transmit audio along with your video.

Here’s an example of the VGA port on your projector:

The female connector makes use of 15 pins to transmit signals. The port clearly shows the receptacles for the pins.

The port has a D shape. One of its sides is longer than the other. 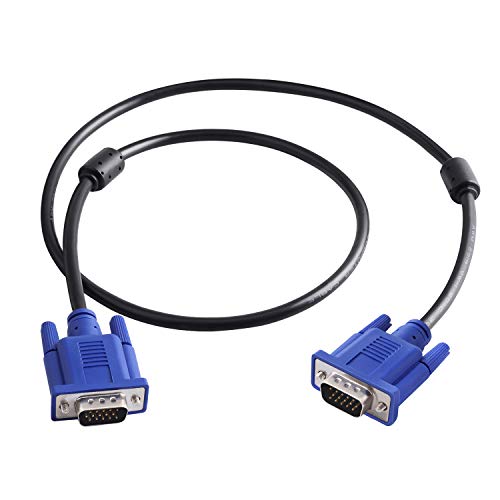 The VGA cable comes with a male 15-pin connector on each end. These connectors fit into the port.

The pins on the cable are easily bent. Make sure the cable is positioned right before pushing it in.

If you experience any resistance, that means some pins are probably bent. You can easily straighten them with a tweezer.

The cable can transmit RGB component video along with information for sync and timing.

When To Use VGA

VGA is good for connections to a computer. You can connect your projector or TV to a PC using VGA.

However, the HDMI and DVI connections are better options. They transmit digital signals and better quality images.

This means you should go for VGA only if those options are unavailable. The low resolution can make your image look stretched.

Change the computer’s output resolution to the projector’s native resolution. This would make the image quality better. 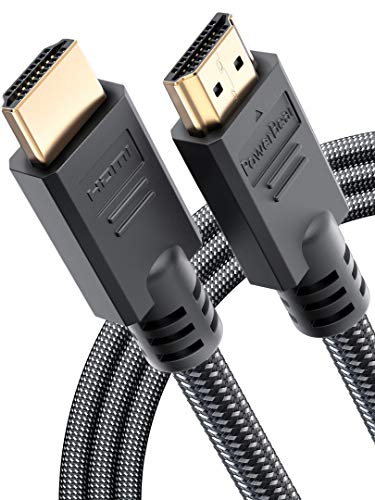 If you want to receive audio-visual signals in high quality, go for the HDMI connector.

HDMI means High-Definition Multimedia Interface. It is the standard for media transmission in modern devices.

Most new models of projectors come equipped with a HDMI port. Also, computers, PCs and game consoles too.

The HDMI connector was invented in 2002. It transmits digital audio and video signals between devices.

With HDMI, you can transmit any type of video signal resolution, including HD and Ultra HD (4K).

Here’s an image of the HDMI port:

The example above is a HDMI input from a PC. The input on your projector would look just like that.

It is taller and wider than a computer USB port. It transmits data over a total of 19 pins.

It is shaped like a ‘D’, but it is much smaller than the VGA port. The design ensures that HDMI cables will only fit one way around.

It is not uncommon for a projector to have multiple HDMI input ports. They may even be labelled, but this doesn’t matter.

The ports can be used for other HDMI connections despite their label. The labelling just helps guide new users. 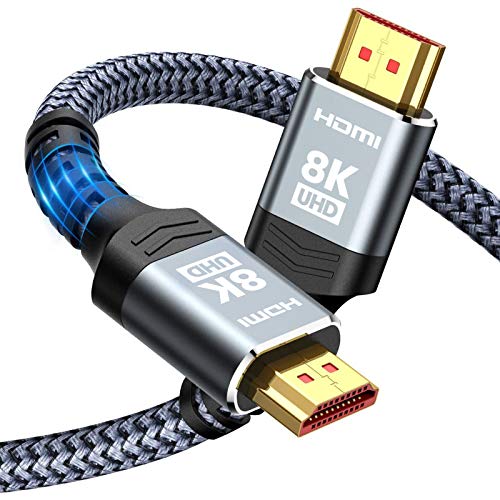 When To Use HDMI

The HDMI connection is the best kind for linking audio-visual devices. If both devices have HDMI ports, go for it.

Most modern devices come equipped with an HDMI port. There’s a lower probability of this in older devices.

This connection scores bonus points for requiring only one cable. It transmits audio and video signals together.

It is also possible to connect a HDMI input to a VGA output. This also works vice versa.

So, if both your devices do not have matching ports, don’t fret. This article will teach you how to get around this.

Comparison Between VGA and HDMI Connectors

1. Which is More Efficient?

The VGA connector can only transfer video signals. To get audio on a movie or game, you need a separate connection.

HDMI can transmit video and audio signals across one cable. This makes it more convenient than VGA connections.

HDMI cables transfer digital data. They can send videos in high resolution like HD and 4K.

This makes them compatible with new systems like cable boxes, PlayStation, Xbox and Blu-Ray players.

VGA connections can only stream analog signals. Their cables transmit a limited amount of data and lower image qualities.

2. Which Has a Better Transfer Quality? 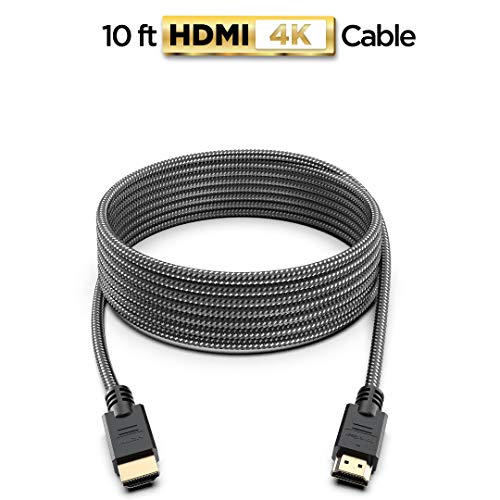 HDMI cables do not have internal interference. Length is not a problem.

Electromagnetic fields tend to cause a distortion in its transmission. This is simply corrected by thickening the wires to increase insulation.

Meanwhile, the signals transmitted across a VGA cable can be degraded if the cable is too long.

There is also a specific way to disconnect VGA cables. Unplugging while your output device is still running, may cause issues.

Lagging is not uncommon in video streams across devices. It is the delay between an input and the device’s response.

HDMI cables have to process digital image signals before displaying. This may delay their response to commands.

VGA cables transmit analog signals and have a reduced lag time. However, if the cable is long, the lag may increase.

This is because signals travel for longer on a long cable. HDMI lags can be reduced by activating settings like Game Mode on your projector.

Table Showing Pros and Cons of VGA vs HDMI

Why does VGA look better than HDMI?

If your VGA connection looks better than your HDMI, it probably means one of two things:

1. You are transmitting a low resolution video.

In this case, VGA may be better suited. It has a lower native resolution and would require little scaling.

When HDMI is used to stream a low resolution image, it may have to downscale. This results in some loss of quality.

It’s best if the resolution is set to match that of the image to be transmitted to the projector.

Here’s how you can change this setting:

Is VGA better than HDMI for gaming?

HDMI is a better option for gaming. It is capable of displaying better quality than VGA.

HDMI is better for modern games in HD like PlayStation and Xbox.

However, if you’re playing a low resolution game (i.e. Nintendo), you may use a VGA connector. There is little loss of image quality.

The VGA has less lag time than HDMI. However, most gaming projectors have a Game Mode which reduces lag on HDMI.

Do I need both VGA and HDMI?

No, you don’t. They can serve the same purpose with a little difference in their deliveries.

However, it is best to purchase a projector or other display devices that have both connectors.

How do I connect VGA to HDMI?

Sometimes, you may have unmatched connector ports. It is possible to still transmit video signals.

You can create a HDMI to VGA connection and vice versa.

You can connect a VGA output to the HDMI on your projector. All you need is a HDMI cable and an adapter.

You can also get a VGA to HDMI converter cable. 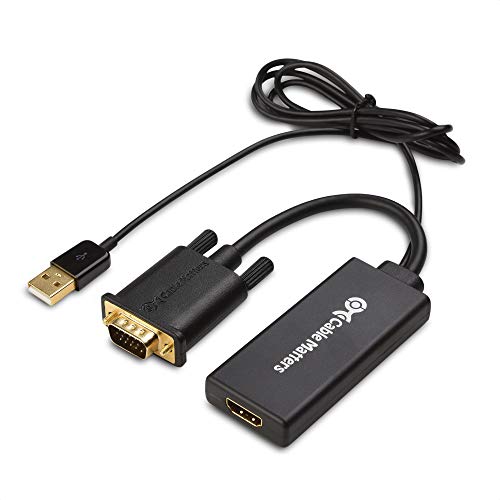 It also has a USB male connector on the same end as the VGA cable. This helps it transmit audio signals too.

Newer projectors come with HDMI ports but VGA may be absent. How do you connect them to your computer’s VGA output?

Step 1: Make sure your devices are turned off.

Step 2: Connect the male VGA connector on the adapter cable to the computer’s VGA port.

Step 3: Connect the USB connector on that same end to the USB port on the computer

Step 4: Connect the other HDMI end on the cable to the projector’s HDMI port.

Step 5: Turn on the computer

Step 6: Select the display option that suits you. Press ‘Windows + P’ to access the menu.

Step 7: Connect the projector to a power switch and turn it on.

Step 8: Use the projector’s remote to select the appropriate HDMI display source.

NB: With the converter, you can get your projector to display the video. However, quality converted from VGA to HDMI will be reduced.

VGA is much older than HDMI. It still has its uses, but it is fast being replaced by the standard HDMI.

In many regards, HDMI is a better connector type than VGA.