It is always a good idea to choose one great surge protector for your projector. It will provide all of the power and protection you need, and it is a critical component of your system.

A surge protector will keep your projector safe if there is a power surge from a storm or some other power outage.

What to Look for in a Surge Protector?

There are power strips that are similar to surge protectors, but they do not offer the protection you need. You need to know the difference because a power strip will provide you with additional outlets, but a surge protector will actually protect your projector and other equipment.

A surge protector is a multi-outlet device that distributes power to any devices that are connected to it. If there is a power surge, it will protect these devices from suffering a voltage surge. This is important because the surge itself can ruin the device.

You want a surge projector that will detect, block, and redirect a surge to a grounding line so that it can protect your equipment. It is important to make sure that you get an actual surge protector and not a simple power strip.

There are several different types of surge protectors to choose from when you want to protect your projector, including the following:

A strip looks similar to a power strip. It is a series of protected outlets on one device that plugs into the outlet. An on-the-wall surge protector is a space saver, and it plugs into an outlet on a wall. It works well if you don’t have a spot for a strip.

If you get an in-the-wall surge protector, you install it in place of your outlet. You should have this kind of surge protector installed by a professional electrician to make sure that it works properly and safely.

A component offers you a high level of protection, and it fits in seamlessly with the rest of your equipment. This type will give you excellent video and audio performance. 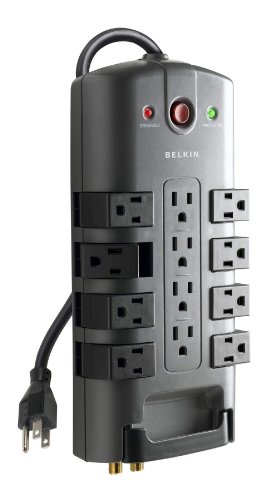 This is one of the best surge protectors made by Belkin. It has 12 different power sockets, and eight of them rotate so that you have enough room to plug in other devices with larger power cords.

You are likely to have a number of devices connected to your home theater, and this is a great outlet to make sure that all of your devices are protected.

It has a 4,320 Joule energy rating that can protect your devices from 6,000 volts in a power surge. It is important that you use the surge protector properly so that it protects your devices.

It protects devices that have an input voltage of 125V, but it protects the entire strip, not the individual devices.

Another great feature is that this surge protector reduces EMP interference, which ensures cleaner energy. The power cable is eight feet long, and you can mount it on the wall.

It is an affordable option, and it will protect your projector and any other devices you use it for. 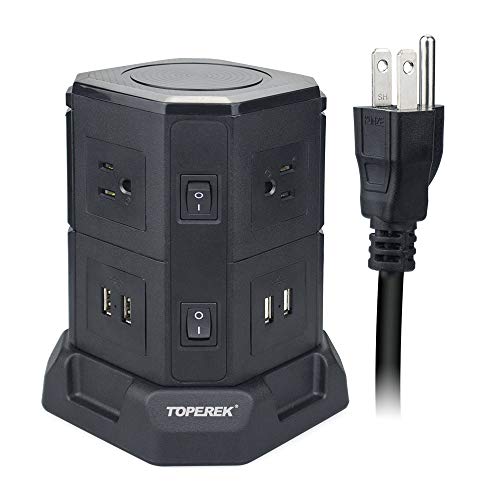 You have two layers, and each one has its own switch so you don’t have to use all of the outlets all the time.

It can support input power from 110V to 125V, and the maximum power is 3000W. This power surge protector is certified by the FCC and the CE. It will protect your devices against lightning, and it has a fire-retardant shell.

It has plenty of spaces where you can plug in your other devices all in one place. You can use it on the desktop or on the floor, and it has a long enough cord to make it easy to store.

The power cord is 9.6 feet long and retractable, which means that you won’t have to have a cord laying around. The only problem with this surge protector is that it is somewhat bulky compared to other models.

In addition to protecting your projector and other devices from a power surge, it has EMF filtration. It is an affordable and flexible option for your home theater devices.

Surge Protectors As Fast As Possible 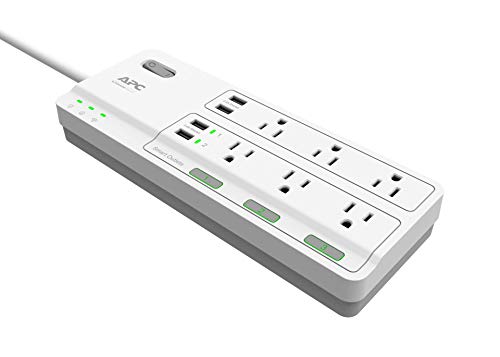 The APC Smart Plug Wi-Fi Power Strip has the surge protection you need, but what stands out is that you can control it with Alexa. It has six outlets and two USB ports, and Alexa is connected to three of them.

It has a six-foot cord, and the plug is set at a right angle to save space. In addition to protecting your projector and other devices from a power surge, it comes with a warranty that will cover up to $150,000 in damages if it fails. 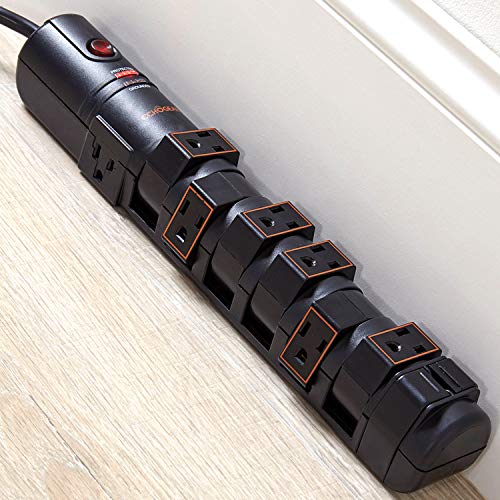 The Echogear power strip surge protector offers eight standard power outlets, and they all rotate to make sure that you can use them all. This makes the surge protector quite slim and easy to tuck away.

It has a power cable that is eight-feet long, and you have the option of placing it anywhere you want. It also covers up to 2160 joules, so it will protect your projector and your other devices.

In addition, it covers up to $25,000 in damages if any of your equipment is harmed in a surge, which lasts for five years. It will protect your projector from a power surge.

This surge protector from Panamax is one of the best out there. It has eight power sockets, two COAX, and a telephone/LAN plug. Each outlet has premium filtration and surge protection.

In addition to surge protection, you get filtration for high current noise and EMF/RFI. This surge protector also comes with a lifetime limited warranty.

The warranty will cover up to $5 million in damages for your equipment if it is damaged by a surge from power, cable service, lightning, or the telephone.

This surge protector is made especially for home theater systems, including projectors. You will be able to use this for your projector and know that it will not suffer from a power surge.

1. What Does a Surge Protector Protect Against?

A surge protector protects your electronic devices, including your projector, against power surges from lightning, a power outage, and more. It blocks or diverts the power surge so that your device isn’t damaged.

2. Does a Surge Protector Really Work?

Surge protectors really do work. You need to make sure that you have a surge protector and not a simple power strip, but it will divert the power surge to a grounding device so that your electronics are not damaged.

3. When Should You Use a Surge Protector?

You should use a surge protector to protect your devices. A power surge can render your electronic devices unusable, and you will have to replace them. When you protect them with a surge protector, you can have confidence that they will not be ruined in a power surge.

We chose the Belkin Surge Protector as the best one because it protects your devices for up to 6,000 volts of a power surge. In addition, it reduces EMF interference and can be mounted on a wall. Although you can use any of the surge protectors on this list with confidence, the Belkin model is the top choice.