You’ve been working hard on this new project and are proud of what you’ve put together.

Now you only have to rehearse your presentation one more time to make sure everything goes as planned.

You set up the screen, switch on your go-to Sony projector, and get nothing.

What’s going on? You try again, multiple times. Nothing changes.

At least there’s no audience. You’re relieved. Time to troubleshoot, you say.

Join in as we explore the most probable reasons why your Sony projector is not turning on below.

Sometimes, power issues originate in the places we’re likely to overlook, like the power cord. And the culprit, in our case here, is likely a loose cable.

Remove the cable from power.

Replug the cord into the electrical outlet.

Turn on the projector.

If the power cord is damaged, it will be impossible to turn on the projector. Power cords can become defective for several reasons, including regular wear and mishandling.

If you have a multimeter , you can check whether there’s a short circuit current on the cable. If it’s there, it means the cord is damaged.

Don’t have a multimeter? Inspect the cord for exposed wires, fraying, or a broken ground prong. If you spot any of these, the cable is likely unusable.

Maybe on physical inspection, the cord looks fine. You can test it on another device to see if it works.

Ensure the voltage rating of the cable and the energy requirement of the device you’re using to test the cable match.

If the test device does not power on, you’ll know the cable is faulty.

Continuing to use a damaged power cord poses a risk to you and the projector itself.

You could suffer electric shock, or the fluctuating power surging through the bad cable could damage the projector. In the worst of cases, it could cause a fire.

The only solution for a damaged power cord is a replacement cord.

Buy a certified replacement cable  to ensure a quality product that meets standardization and safety requirements.

Maybe the electrical outlet to which you’ve connected the projector is faulty. That would explain why the projector will not power on, even when you unplug and replug the power cable.

Use a different gadget to test whether the outlet can transmit electric current.

If the second device does not power on either, you’ll know your electrical outlet is faulty.

Sony recommends that you only plug the projector into a wall outlet, not a power strip or surge protector. 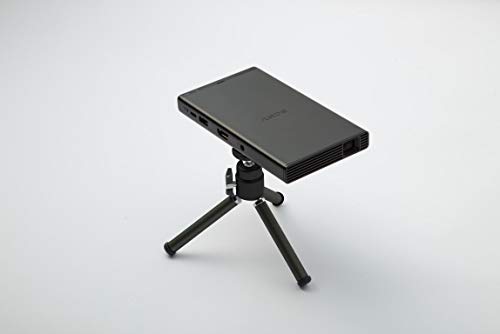 Are you using a battery-powered projector ? Sony has several mobile mini projectors that tap power from built-in batteries.

You can take these little, nifty devices anywhere. Plus, they connect to all kinds of everyday gadgets like smartphones, laptops, and streaming devices.

Charge the battery before turning on the projector.

It’s a scenario that happens to the best of us: You try pointing the remote and pressing the buttons countless times, wondering why the device isn’t responding.

If you’ve been doing this to the projector, you may need to pause and check the remote batteries. Dead batteries are no one’s friend, and they certainly won’t power on your projector.

Try the power button on the control panel. If that works, you’ll know the problem lies with the remote.

Replace the batteries with new ones and press the power button on the projector again.

6. Turning The Projector Off And On Again In Quick Succession

Sony explains that when you turn off the projector and then turn it back on immediately, the unit will not respond.

After switching off the projector, wait for at least two minutes before turning it on again.

7. The Lamp Is Not Installed Properly

When it’s the end of the road for your lamp, you may notice a difference in picture quality and diminished brightness. But you’ll most certainly see the message “Please replace the lamp” on the screen.

When that happens, don’t panic. Replace the lamp with one of the replacement lamps that Sony recommends  for your unit, and the projector should work just fine.

However, improper lamp installation can happen during lamp replacement. And that’s when you’ll begin to have problems powering on the unit.

Reinstall the lamp, taking care to insert it correctly the second time around.

How to Replace Your LMP-H220 Projector Lamp in Your Sony Projector.

Here’s a walk-through of the process to help you get it right:

The installation process is a reversal of the first six steps above.

Sony advises that you use only the recommended lamps for your projector. Any other bulbs may not be compatible with the projector and could cause it to malfunction.

8. The Lamp Cover May Not Be Closed

How to solve/fix the lamp cover error - 100% solved

If the lamp cover is not tightly closed, the projector will not turn on.

Disconnect the projector from power.

Place the unit on a flat surface for safety.

Slide the lamp cover forward to open it.

Confirm that the lamp door is closed and secured into place.

Bring the cover down and slide it forward into position. Ensure that the tab slides under the opening and into its slot.

As you move the lamp cover to the end, you should hear it latch into place. That’s how you’ll know you’ve secured it.

An easy way to know whether the lamp cover is the issue is by checking the lighting indicators.

If the warning indicator flashes twice in red and the ON/STANDBY indicator lights in red, it means the lamp cover is not securely closed.

So many things could make a Sony projector fail to power on, from power supply hitches to drained batteries and poorly installed lamps.

Once you pinpoint the problem, however, finding a solution becomes easy.

Thankfully, the glitches we’ve listed above are all easy to solve. And best of all, they don’t need a technician’s intervention.