If you’ve noticed a blinking green light on your Sony projector, don’t panic.

The green indicator light on Sony projectors shows the unit is working fine.

Occasionally, however, the light might blink either constantly or at intervals.

Join in as we explore:

Why Is My Sony Projector Blinking Green Light? 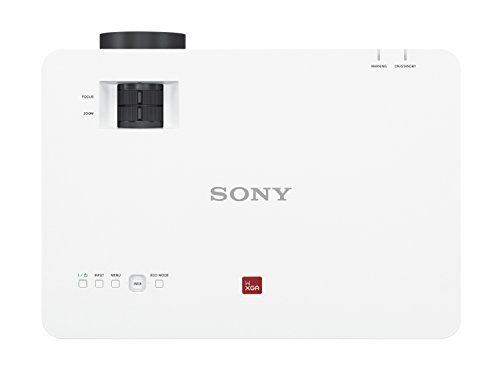 It’s actually a good thing when the indicator (ON/STANDBY) on your Sony projector  lights up in green.

The indicator blinking or lighting in green does not signify a problem. Quite the opposite, it shows that everything is running as it should.

When you plug the projector into power, the red indicator lights up as the unit enters standby mode. And a few seconds later, it starts blinking green.

The blinking green light shows that the unit is warming up. You could say it’s working behind the scenes, making the preparations it needs to operate uninterrupted.

At this stage, the projector is getting ready to receive a signal. It cannot detect any video signal yet. So if you try pressing the buttons, you’ll not get any response.

Once everything is ready, the unit exits the warm-up stage, and now, it’s all set to project.

The blinking stops and the green light becomes steady.

The projector can now detect the signal. And if you press the Enter button to show a file, the projector will reproduce the image and send it to the screen.

Here’s a summary of how the unit goes from inactive to active:

My Sony Projector Light Won’t Stop Blinking In Green. What Could Be The Problem?

Sometimes, the blinking green light on your Sony projector can be a sign of trouble.

Below, we show you three occasions when the blinking indicator light is cause for alarm.

When The Blinking Is Nonstop

If you turn on the projector and the green indicator light doesn’t stop flashing, it shows that something is wrong.

In this state, the unit will not operate. And no matter how many times you press ENTER, you’ll receive nothing on the screen.

Press and hold the ON/STANDBY button until the projector powers off. Then disconnect the power cable.

Wait a few minutes, and then connect the power cable once more.

Turn on the device and wait for the indicator to turn green. If the projector is not defective, it should now run as expected.

If you’ve ever used an electronic device for a considerable length of time, you probably know the phrase “restart the device.” It’s the magic pill of the electronics world.

Even if the only device you’re familiar with is your smartphone, you know you can always restart the phone if it freezes or becomes slow.

And it works the same way for the projector. Turning it off refreshes the operating mechanism, getting rid of any errors in the system. And when you turn it on again, the system runs anew.

When The Green Light Blinks And Then Fades

When the lamp is damaged, the screen will dim, and a warning message will pop up on the projector screen.

Replace the lamp. The short video below shows you how:

How to replace the projector lamp for SONY VPL EX246

All you need is a screwdriver and a new lamp.

Buy the recommended replacement lamp for your Sony projector model.

Note that replacement projector lamps are not compatible with every Sony model. Using the wrong lamp could damage the projector.

So always check that the projector lamp you buy is compatible with your model.

When Green and Red Lights Blink At The Same Time?

Sometimes, the green indicator light and a red warning light will blink at once.

One thing worth noting about Sony projector lighting is that the lights do not come on erratically. They have a blinking sequence.

You can tell the type of error you’re dealing with based on the blinking frequency of the lights.

1/ If the indicator light is on and the red warning light blinks twice, it means the lamp cover is not closed tight.

Solution: Power off the projector. Then secure the lamp cover.

How to solve/fix the lamp cover error - 100% solved

2/ If the indicator light is on and the red warning light blinks three times, it means:

Solution: Switch off the unit and allow the lamp to cool. Then turn it on again.

If the lamp is failing, there will be a message on the screen notifying you of the same. To solve the problem, install a new lamp.

3/ If both the indicator light and warning light blink twice, it shows that the temperature inside the unit is too high.

Solution: Check the ventilation holes and remove anything blocking them.

If you’ve placed the projector near other electronics, they may be blowing hot air onto the projector. Move it to a different spot.

4/ If both the indicator light and warning light blink three times, it shows that the fan is not working and needs repair or replacement.

Maybe you’ve tried the recommended solutions, but the problem persists. In this case, consider sending the projector to a service center.

Servicing the unit should solve many of these problems. And where components are irreparable, the technicians will advise you accordingly.

The indicator light on Sony projectors blinks in green when you power on the unit. Once it’s ready to use, the green light stops flashing and becomes steady.

Sometimes, the blinking carries on indefinitely. That shouldn’t happen, and it shows there’s a problem with the projector.

You can diagnose the problem by noting the number of times the light blinks. But if you cannot solve the issue on your own, consider using an authorized service provider for repairs.