An ultra short throw (UST) projector can project devices a few inches away from the screen, which is a far cry from the amount of space regular projectors need for their setup.

Kindly note that a UST is not the same as a short throw projector—the latter requires two to four feet of gap from the screen to cast images. A standard projector, for more context, needs around 10 to 12 feet to project a similarly sized image. USTs make do with much lesser space.

Ultra short throws have zero to minimal setup requirements. They typically sit on a stand or pedestal right before the projection screen.

The question, however, is, “Can you mount a short throw or ultra short throw projector on a ceiling?” If not, why not? And if yes, how does that work out?

Keep reading to find the answers to these questions and more.

Can a Short Throw Projector Be Mounted on a Ceiling?

With that said, setting up the device in a ceiling won’t be as simple as mounting a long-throw projector since it is purpose-designed for that.

What are Ultra Short Throw Projectors Designed For? 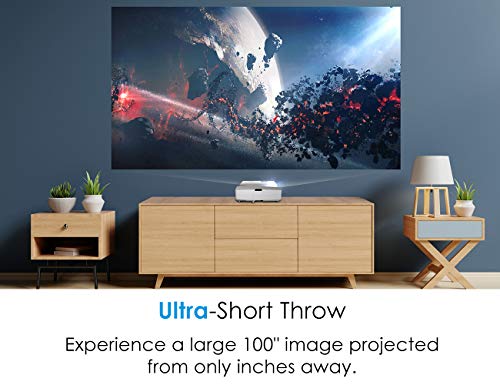 An ultra short throw projector is designed to be placed a few inches away from its projection screen or wall.

The maximum distance an ultra short throw can be away from the screen is four feet. Most USTs are positioned much closer than that, sometimes less than a foot away.

If it hadn’t been for ultra short throws, projections in tiny apartments or other compact spaces would not have been possible.

USTs are particularly handy in classroom setups where there’s the risk of the projection light blinding unaware students. Not to mention, shadows are a non-issue with an ultra short throw device.

Should You Mount an Ultra Short Throw Projector on the Ceiling?

Besides the short-range or compact space requirements, the biggest draw with ultra short throws is not needing to affix them to the ceiling and saving installation money. By mounting the device, you’re defeating the purpose.

If you’re still not convinced, the following may sway you to the “no-mounting” clan.

May Impact the Visuals 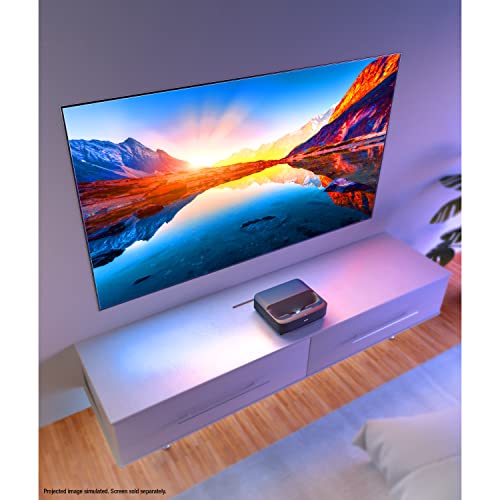 Some ultra short throw devices’ performance could highly depend on how far they are positioned from the screen. The wiggle space could be very narrow. Check the product’s user manual for more information on the ideal distance from the screen.

Ceiling-mounting a UST projector could also create misalignment concerns or keystone issues. Ultra short throws are highly susceptible to creating trapezoidal-shaped visuals. Positioning them on the ceiling increases that likelihood.

Although most projectors can digitally move the picture to correct any misalignment, that would hurt the image’s pixel density, hampering picture clarity and resolution.

The last thing you’d want is to see 1080p visuals on a 4K UST projector because you ceiling- or wall-mounted the device.

UST projectors usually pack an audio punch or sound better than your average projector as there’s more room in their large body.

The projector’s audio chops may not be a replacement for a dedicated speaker setup or soundbar, but those perform pretty well if there’s no dedicated audio setup in sight.

Placement is critical if you know how audio works in a confined space. A speaker set a few feet away than recommended or positioned behind the listener instead of at the front can create a world of difference.

Similar audio concerns could arise if you position your UST projector into the ceiling. The speakers in a UST projector are rear-positioned, meant to face the viewer.

When you mount the projector on the ceiling or to the wall, the speakers may get blocked or could project sound in a direction away from you, causing the audio to sound sub-par or not how the manufacturer intended.

May Hurt Your Eyes

Almost all ultra short throw laser projectors use laser light to cast visuals. The light is powerful, and looking directly into it could damage your eyes.

When ceiling-mounted at a distance from the screen, the likelihood of you or other people in the house staring right into the light and hurting their eyes is high.

In short, besides causing audio and video issues, ceiling-mounting an ultra-short throw could also cause ophthalmology concerns.

If ceiling-mounting was always the plan and you have the space, get a regular, long-throw projector or a short throw. Those projectors would cost you less money, and mounting would be easier, too, as those projectors are designed for ceiling setups.

Can you ceiling-mount an ultra short throw projector? Yes, you can mount your UST projector on the ceiling. But because ultra short throws usually don’t come with mounting holes like traditional projectors, you’ll require a special wall mount to set them up. 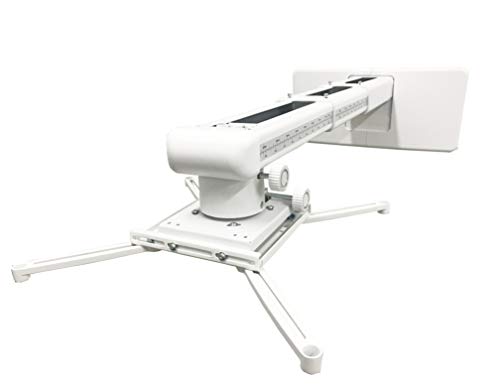 Kindly note that ultra short throw projectors tend to be large and heavy. The mount used, therefore, must be well-built or high-quality too. The one linked above is a solid choice.

Traditional projector screens would work fine with an ultra short throw, but the setup won’t be optimal. For instance, the picture quality would degrade, or 4K visuals may not look their part.

An ultra short throw projector with an ALR screen can create bright, television-like images. Not to mention, the shorter range combined with the laser light source also determines how bright the visuals can get.

CLR screens should be ideally paired with an ultra short throw that is not mounted to a wall or ceiling. If not, then there’s no need for such a high-gain screen.

If you’re going to mount your UST projector upside down anyway, position the ALR screen upside down too for a good viewing experience.

Although expensive, ultra short throw projectors are becoming popular, with a lot more people wanting to buy one for themselves.

The projector’s convenience and flexibility despite physical space constraints cannot be lauded enough and is probably the reason for its growing popularity.

But when you throw the projector toward the ceiling, you are using it wrong. Experts sneer at the mere thought of wall- or ceiling-mounting a UST.

If the projector replaces your traditional ceiling-mounted projector, conceal the vacuum the old projector left behind if there’s no better use for it.

And if you’re thinking about making holes in your wall or ceiling to accommodate an ultra short throw, don’t get a UST. Buy a regular projector instead.