The world of cables, antennas, and satellites can be confusing, especially if you’re trying to set up your TV’s antenna by yourself.

You’ve done your own research and gathered all the necessary tools, but one question still remains: are satellite and coaxial cables the same thing?

You’ve seen “satellite” and “coaxial” be used interchangeably, but should they be?

Let’s learn about your home’s cables!

Are Satellite and Coaxial Cables the Same Thing?

A satellite cable is a type of coaxial cable.

A coaxial cable is a cable that transmits radio frequency signals. It’s often used to provide internet via Ethernet and TV broadcast signals to your home.

For instance, the RG-6 coaxial cable, which is commonly used for satellite dishes, is a satellite cable.

Difference Between a Satellite & Coaxial Cable

There are a few differences between a satellite and a coaxial cable.

So now that we know that satellite cables are a type of coaxial cable, let’s learn about what sets them apart.

There are three ways you can tell the difference between a satellite cable and a normal coaxial cable: design, frequency, and connector.

Satellite cables usually have an extra layer of aluminum mesh. This allows them to securely transmit higher frequencies without delays or external factors preventing transmission. 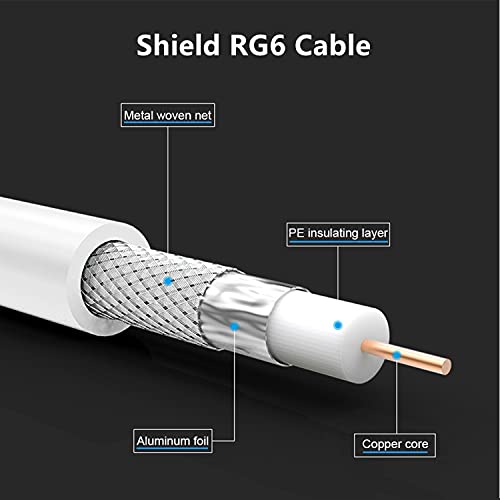 This also makes the cable slightly sturdier and less prone to harsh weather conditions, like wind or rain.

Finally, the last difference between satellite and coaxial cables is the connector.

Satellite cables are usually fitted with an F-type connector, which allows them to easily plug into your satellite LNB and receiver (e.g. your TV).

Meanwhile, other coaxial cables are usually fitted with a BNC bayonet connector or RCA phono jacks. These connectors allow you to use the cable for other purposes, like connecting to radio antennas.

So, if you’re having trouble connecting your normal coaxial cable to your satellite dish, don’t try to fit the cable with a new connector. Instead, buy a satellite cable.

Difference Between an Aerial & Coaxial Cable

An aerial cable is a type of coaxial cable.

Like satellite cables, aerial cables are a type of coaxial cable.

The word “aerial” refers to how aerial cables are on utility poles, or in the air.

They transmit electronic signals and are commonly used by telecommunications companies to deliver signals across areas without occupying space on the ground.

They are not the same thing as satellite cables are not used within the home.

One good thing about aerial cables is that you cannot be electrocuted by touching them, which keeps electricians and any curious birds safe from electrocution.

Satellite and coaxial and aerial, oh my!

Satellite and aerial cables are both different kinds of coaxial cables designed for specific purposes.

Remember, they are coaxial cables because of the way they’re built.