“Response time” refers to the milliseconds that the pixels on the screen – be it a projector screen or a TV – take to switch from one color to another, such as white to black or a darker shade of green to a lighter hue.

The response time of any device with a visual component – such as a TV, projector, monitor, or even a handheld device – is key to a seamless and enjoyable viewing experience. A few milliseconds of delay may hamper the experience when playing fast-paced games, watching an action movie, etc.

Both projectors and televisions have made advancements in video reproduction, respectively. The question is, “Which one of the two fares better in terms of ‘response rate’?”.

Keep reading to find that out.

As mentioned above, “response time” determines how well a device with a screen can switch between colors while transmitting transient images. If you know anything about cameras, response time is roughly equivalent to shutter speed.

Here is an excellent video elaborating on “response time”:

A speedy response time helps eliminate trailing or the ghosting behind fast-moving elements in fast-paced shots. Slow response time means the panel would still be processing the change in color of the pixels between frames, resulting in a sub-standard viewing experience.

How and When Does “Response Time” Matter? 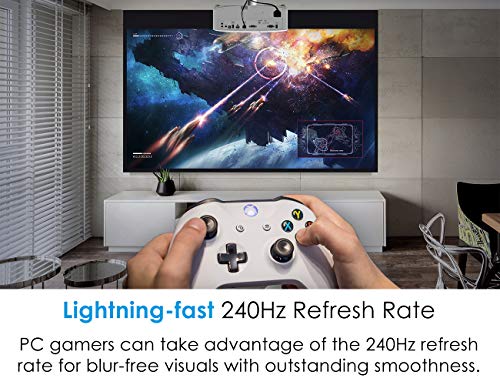 Even videos on the latest TVs and computer monitors do not exhibit delays that are significant enough to be noticeable. Most users are usually not aware of their screen or monitor’s response time.

Response time makes its presence felt during gaming. In fast-paced games, every millisecond counts – usually determining the game’s outcome. In short, response time matters to gamers as it affords them a competitive edge.

A response time in the 1 to 5ms range is considered ideal for gaming – the lower the number, the better. To a non-gamer, a higher response time will not be bothersome.

The Relationship Between Response Time and Refresh Rate

Refresh rate and response time are two different things, but they go hand in hand.

Refresh rate denotes the number of times a display can draw a fresh image per second. Measured in hertz (Hz), a higher refresh rate signifies seamless visuals. A lower refresh rate leads to choppiness in videos.

A 60Hz monitor will refresh 60 times a second. Its response time, therefore, would or must be 16.67ms (milliseconds). A second has 1,000 milliseconds.

If the 60Hz screen has a response time lesser than or equal to 16.67ms, the transition between the different frames will be much smoother, or there won’t be any motion blur. If the response time is higher than 16.67ms, there could be some framing concerns.

A screen with a 120Hz refresh rate cannot have a 24ms response time, as motion blur would become quite apparent. Also, a 144Hz panel must have a response time than 6.94ms. A 240Hz screen’s response time must be lower than 4.16ms.

The Cited Response Time is Not Consistent

The response time of a display is not constant. The cited number is typically the best response time a given panel is capable of.

Therefore, it’s not unusual for the pixels in a 120Hz screen with a 4ms response time to switch to 10ms when transitioning from a darker color to a lighter hue – as the transition from black to white is a lot more resource-intensive.

When watching a fast-paced action movie wherein scenes comprising dark and bright lighting environments are par for the course, the response time would take a hit, or it could go up than what’s claimed.

How would that affect the picture quality or viewing experience?

Quite a bit of black smearing would be noticeable in the movie’s fast-paced visuals wherein multiple dark pixels are involved. The ghosting will not be as evident in overall bright scenes.

The refresh rate of a projector is usually 60Hz at least. It goes up from there to 120Hz, 144Hz, and higher. The response times tend to go down in correlation. Generally, projector response times are superior compared to that of televisions.

Why are Projector Response Times Greater?

Projectors tend to have high refresh rates and low response times because they are used for more than just watching shows and movies. Gaming is one of the biggest reasons why people buy a projector.

Compared to content created primarily for television, games are snappier or require super-fast responses. Most FPS (first-person shooter) and fighting games play well when the response time is 8.3 seconds or lower, or the refresh rate must be at least 120Hz.

Gaming projectors such as the Optoma HD146X High-Performance Projector  and the BenQ TH685  do that without breaking a sweat. If you have the budget and the appetite for lower response time, look at gaming projectors with a 480Hz or higher refresh rate.

Several games could be seamlessly played on projectors with considerable lag – mainly if those titles do not depend on split-second timing. Turn-based games, casual games, and several console titles feel responsive and fast on old, seemingly outdated projectors.

Console games that run at 30FPS have high minimum lag requirements, such as 100ms. Luckily, hitting those numbers is pretty easy for most projectors. Even 66ms, which is well below the required 100 milliseconds, is an easily achievable target.

Moreover, most budget projectors feature a “gaming mode”, or the option to accelerate movements on the screen.

In short, you need not buy the latest and most incredible projector to enjoy gaming on the device.

The Response Time of a TV

As stated above, a TV’s response time is set lower than a projector and certainly below a gaming monitor. Even the best, most advanced TVs could have a response time between 15 and 30ms or higher.

A PC (non-gaming) monitor would offer higher refresh rates and better response times than a much more expensive television – even if you set the picture mode on a TV to “fast” or “gaming”.

Why is TV Refresh Rate Set at 60Hz?

But that’s not the case with televisions.

Why are TVs behind the curve?

Televisions are not typically used to play content that demands a refresh rate greater than 60Hz. Pretty much all film and television content is filmed at no more than 60fps (frames per second). Some could be as low as 24fps.

Also, the refresh rate is set lower because people don’t interact with their TVs as they do with their gaming monitors or even projectors. For instance, they are not seated too close to the panel or right in front of the screen.

If you ever wondered why gamers do not use TVs instead of a dedicated gaming monitor, you have your answer now.

Some companies may claim their 4K TVs to have a refresh rate of more than 120Hz. While some of the latest 4K televisions sport actual 120Hz panels, most bear the 120Hz badge courtesy of “effective refresh rate”.

To not get into legal trouble, manufacturers label their TVs’ motion handling capabilities differently. They may omit the terms “response time” and “refresh rate” in their marketing materials too.

Some companies are upfront and clarify what their technical jargons denote. Samsung, for instance, makes it clear that “Motion Rate” in its 4K and 8K televisions is essentially a number that’s twice their TVs’ native refresh rate.

Newer televisions, such as the 4K and 8K TVs, don’t come with high refresh rates and excellent response times because there’s simply no requirement for that.

Though some 8K and 4K TVs have those fancy response times, those aren’t standard across the shelf. It’s pretty normal for modern 4K TVs to not have response times and refresh rates on par with gaming monitors and projectors.

Higher refresh rates require relatively expensive panels and enhanced controller boards. The difference in price between those displays and the standard 60Hz screens isn’t massive, but there is still a premium attached.

While a 120Hz refresh rate and 4ms response time could spur an attractive marketing campaign, it may not necessarily translate to sales – especially if the prices were to be hiked in the process.

At the end of the day, it doesn’t make sense for TV makers to equip their product with an expensive component and increase the retail price (or cut down their margins) when the pricey addition doesn’t make any tangible difference to the end user’s viewing experience.

Therefore, companies stick to standard panels and project their televisions as capable of a higher refresh rate and lower response time so that they could grab customer attention and charge a slight premium if there’s scope.

Response Times of a Projector and a TV – The Upshot

Quite clearly, projectors have better (or lower) response times than televisions because a projector is meant to be used for more than just watching shows and movies.

A projector is also a critical tool in most people’s gaming arsenal. A TV is not. For gamers, low response times matter a lot, which the typical TV fails to deliver on.

Gaming on a TV is not entirely out of the question, however. It’s more than feasible, especially with the less graphics-intensive titles. The only requirement to meet is the response time must be lower than 16ms (with a 60Hz panel) and below 8ms if the display is 120Hz native or supports the refresh rate.

The Sony X900H  and the Samsung TU-8000 Series  are more than just capable of some hardcore gaming sessions.

Do not buy a projector over a TV or vice versa because the refresh rates and response times on either are better. Picture clarity, brightness, color accuracy, etc., are much more important aspects to focus on and get right.

However, if you are a gamer, the faster response times that projectors and gaming monitors offer should matter and must be duly considered. But those aspects should still not take precedence over the “core” features.