If you are reading this article right now, you are probably considering purchasing either a power conditioner or a surge protector. Are you wondering if there are any differences between the two? We have answers!

These two electrical gadgets are related to power regulation and often draw comparisons. It is essential to identify the clear distinctions between both gadgets to avoid mixing up their features or uses.

Power conditioners filter out noises produced by fluctuations in a running voltage. In comparison, surge protectors — as the name implies — dam up a high voltage and protect your device against an incoming power surge.

In this article, you’ll find a detailed analysis of  power conditioners and surge protectors along with the pros and cons of both gadgets. So, let’s get started!

What Is A Power Conditioner? 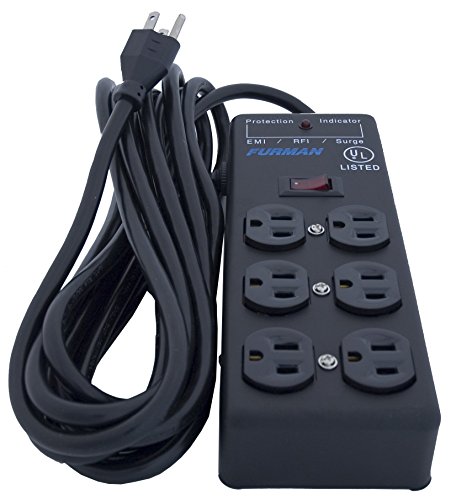 A power conditioner is a three-pronged-plug gadget that filters out high voltage electric noise and glitches generated by surges to the circuit.

A power conditioner serves as a sieve that sifts out unwanted interference during power transfer from an outlet to an electrical device. It cleans and stabilizes inbound power as well as enhances performance.

Circuit noise, also known as line noise that interferes with power distributions, is a result of several things — from glitches in the circuit to low-grade wiring. So, the power conditioner works as an in-line buffer that smoothens and removes noise interference produced by surges.

What Is A Surge Protector?

A surge protector is a device designed to safeguard electric equipment from power surges and spikes in  current by blocking out incoming fluctuations in the current.

Unlike power conditioners, surge protectors do not regulate or filter out noises.

Once the surge protector senses a rush of extreme voltage, it blocks the voltage before it gets to any plugged device.

Customarily, most home appliances are engineered to take 120 volts of AC power. This is because standard power outlets in the U.S. (and many other countries) provide 120 volts.

Hence, when there’s a power surge and the voltages spike over 150 volts, the current could damage unprotected electric equipment. This is where the surge protector comes in.

Side By Side Comparison Of Power Conditioner And Surge Protector

There are several similarities between a power conditioner and a surge protector that make regular users mistake them for one another. In this section, we’ll compare both devices based on different factors.

We’ve established that power conditioners and surge protectors are quite distinct from each other. The question is, “Is there a difference in how to operate them?”

While both devices have different applications, there is little difference in how to operate them. Both devices are three-prong plugs and can be connected to standard wall power outlets.

Plug your power conditioner into a wall power outlet and switch it on by pushing down the switch button. Then you are good to go!

Repeat the same process for a surge protector.

NOTE: Ensure your device is well connected to the outlet before plugging in your gadgets and appliances to a power conditioner or surge protector.

Some power conditioners look like surge protectors, while others are sturdy electronic boxes with a three-prong plug and multiple socket outlets attached. However, both hardware have varying internal features and functions.

The power conditioner works as a noise filter, supplying a consistent 120 volts per second to appliances and electric equipment plugged into it.

On the other hand, the surge protector works as a shield to block out power surges and any potential damage.

Since power conditioners and surge protectors both clean dirty power, users are inclined to favor the more affordable option.

Surge protectors take the cake as the more cost-effective option — they are affordable but provide limited solutions to dirty power issues.

Meanwhile, power conditioners are more efficient; most of them have a built-in surge protector. Their only downside is that they cost about ten times more than surge protectors.

If you’re on a budget, a surge protector is cheaper than its more grandiose counterpart: the power conditioner.

Like most electronic gadgets, both power conditioners and surge protectors come with safety manuals to assist in the safe operation of both devices. The safety manuals keep you aware of the hazards of misusing these devices.

Surge protectors can only protect the devices or appliances directly plugged into them. Do not plug ‘Surge Protector 2’ into ‘Surge Protector 1’ to increase the number of power outlets — this practice is called Daisy Chaining.

Daisy Chaining is illegal; it can overload Surge Protector 1 and result in a fire. It also compromises the protective abilities of both surge protectors and invalidates any warranty on them.

Also, ensure you purchase surge protectors inspected by certified safety organizations like Underwriters Laboratory (UL) or Intertek, to avoid any fake products on the market.

Look out for the “UL” or “ETL” (for Intertek) certification logos on the surge protector or its packaging. Both logos indicate that the device meets the U.S.’ electrical safety standards.

Electrical devices and liquid do not mix! Don’t keep water or any other liquids around your surge protector to help avoid the risk of a shock.

Also, keep children away from this hardware and avoid reaching into the outlets with objects that aren’t fitting plugs.

Avoid the risk of electric shocks; never remove the cover or disassemble the power conditioner while it’s in use.

Pros And Cons Of Power Conditioners vs. Surge Protectors

Power distribution is a significant subject and a source of concern worldwide. Users seek to protect their equipment, devices, and appliances against dirty power distribution that could harm their hardware.

There’s a high probability that you found this article after an unfortunate event of dirty power causing disturbing damage to your gadgets or appliances.

Here’s some good news: you’ll never have to experience that again. All you need is a surge protector or power conditioner.

Both devices are similar, but the power conditioner offers more protection with its wide range of functionality.