Laser tag accessories and games are the new booming generation of toys in the world of games. The greatest thing about them is that they’re not limited to a specific age group and everybody could enjoy them.

There’s a wide range of accessories that you could buy to add to your laser tag toys to increase the fun and competition with your friends.

One could simply have their own arcade at home!

We’ll be reviewing a few of those accessories to give you an idea of which to purchase for your laser games.

The 8 best accessories that make your next games funnier

You don’t necessarily have to hit the laser arena to play a decent laser game with your friends. Getting the right equipment and accessories to your toys will be even more fun playing at home!

Check out the below recommendations that we’ve gathered for you.

Having this set is going to take your battle to another level, and transform your current surroundings to a real-life battlefield.

The set could be placed indoors or outdoors. Make sure you check the space available for storage beforehand. 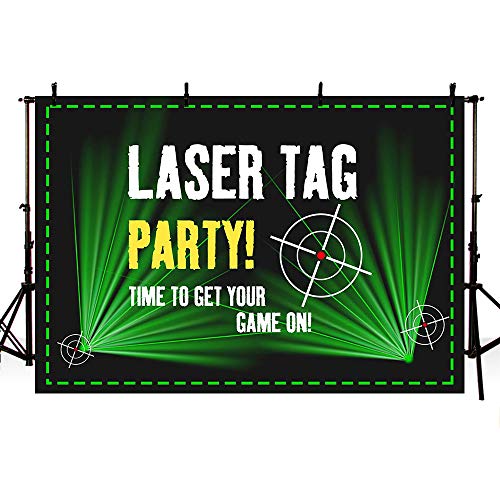 To complete the arcade vibe to your home party, this would be a great decorating addition.

Set up a corner for your kids for souvenir pictures with their friends to make the day memorable! Once you switch off the lights and switch on the backlight, the words will glow!

We love that it could be also used as a wallpaper, table cloth, curtain, and party/occasion background. 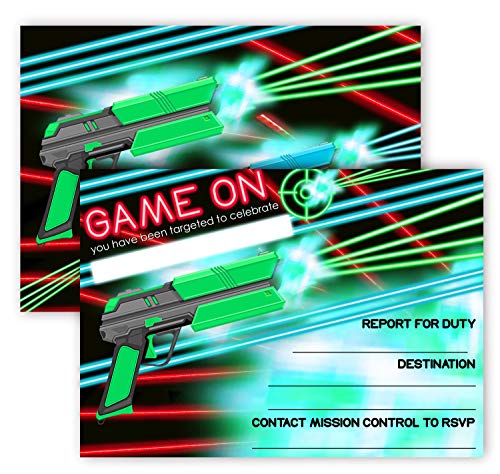 To have a party, you must have invitations to it! Kids love creative invitations, especially for theme parties.

These invitations come in a dozen double-sided cards, envelopes included. The cards include spaces for the invitees’ names and the location of the party and contact person in charge.

What we really like about these cards is that they don’t have to be used specifically for a laser tag birthday party. They could be used for any other event as well, like a game night or so. 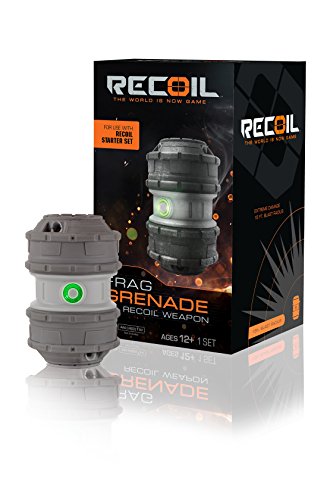 This accessory is particularly cool as it gives you the feeling of buying a new toy altogether just when you were starting to get bored with yours.

To get this accessory to fully function, with the sound effects and all, you need to download an app for it. Otherwise, it’ll only blink.

It’d be best used on a soft surface, like grass or a carpet, as playing with it involves throwing it around and it’d break if thrown on a hard surface. 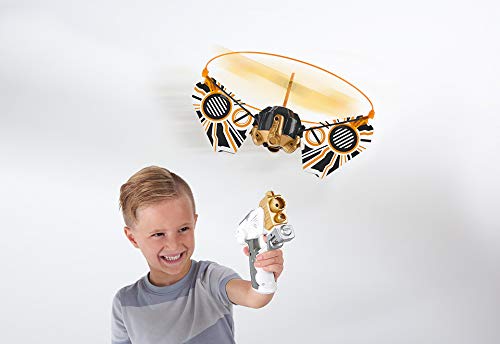 This is a flying target game, which could be pretty exciting and challenging for younger kids. The game involves a lot of running around and chasing as the target flies around and the kids try to shoot it.

Once fully charged, the target can fly for 4-5 minutes.

The box includes a laser gun and a flying object that gets targeted at using the laser gun. The gun produces harmless infrared light, which causes the flying object to fall after 5 direct hits. 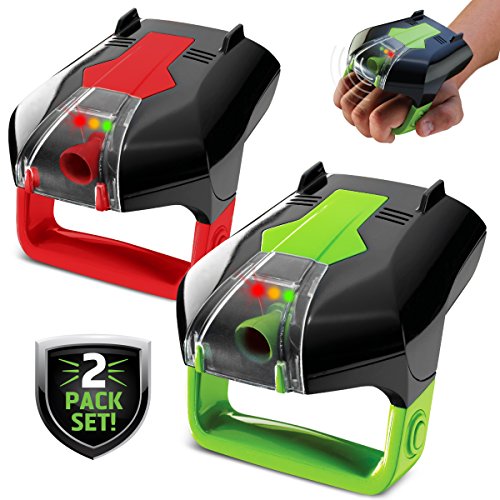 Now this one’s an interesting and fun one! The pack has two sets of laser blasters with point tracking and you’ll need 3 AAA batteries for each blaster.

The blasters have vibration, sound and light effects which make the whole experience a fun one.

It’d save you the hassle of having to go to the arcades for the arcade laser tag game, and even better, you won’t be needing to wear safety vests anymore for playing it!

The game gets pretty competitive, as each player has 6 lives per game and gets to shoot 5 times each reload.

The laser blasters have light indicators with different colors that keep the players on track on how many lives they have left. 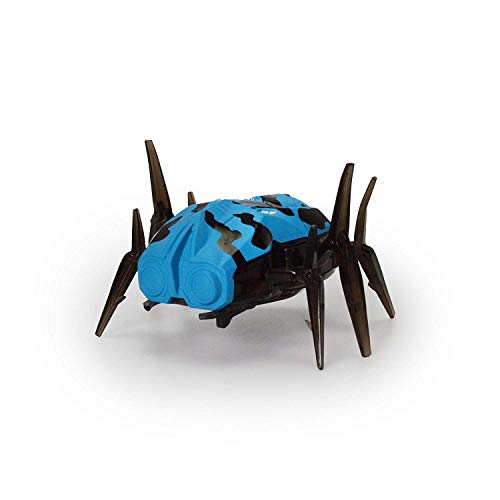 This is an electronic moving spider toy. The spider moves around quickly, gets shot at and flips over. Anybody could play with the Dynasty Toys Robot Bug.

Of course, you have to make sure you’re using the toy on an even surface.

You could purchase several of those and play in groups or as a family and enjoy competing with each other with the little bug robots.

The bug doesn’t require batteries, so you don’t have to worry about regularly changing them. We think it’s missing a light indicator for charging life, but other than that, it’s pretty awesome! 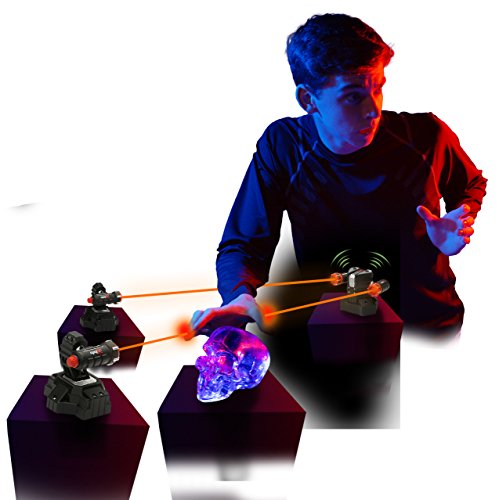 Saving the best for last! This game is an invisible beam barrier and alarm spy to protect your valuables. Awesome addition to your SpyX gear collection, we’d say!

This one is a game with a real feel to kids and they love it. It provides them with a feeling that they’re protecting their personal stuff from their siblings or parents, with a sense of adventure to it.

What are the Benefits of Playing Laser Tag?

Believe it or not, there are many benefits to playing laser tag! Here are some of them:

Most games involve creating teams and working towards achieving a goal. The idea of teams forces the players to communicate and cooperate together to achieve their goal against the opposite team, hence improving both their communication and teamwork skills.

Also, it introduces a great chance of meeting new people.

This term means that it trains players to accept losing sometimes, and not being what we call a “sore loser”.

Naturally, any game in the world allows players to have only one winner!

Players end up accepting their losses in a good manner, without even noticing, as it’s basically the nature of the game.

Quick guides on how to play and how to win laser tag games!

Yes, laser tag is considered to have a low impact on the body, however, it does involve a lot of moving and action.

Chasing around and hiding from the enemy, as well as preventing yourself and your team from being hit, are all actions in the game that require you to move around and get your heart rate up.

Because the game involves a lot of action, very often would a funny incident happen that you’d always recall with your friends later on.

Moves Children Away from Screens

Nowadays, children’s best friends are all devices that involve staring at a screen! iPads, laptops, tablets, Xbox, and so on, have become our worst enemy and their best friend!

To finally find a game that’s as entertaining and challenging, and even better, involves a lot of moving around as laser tag game does, is a great thing!

Laser tag games aren’t only fun and challenging, but also beneficial and involve a lot of activities for both children and adults.

Of all the products we reviewed today, we especially loved the SpyX / Lazer Trap Alarm the most!

We like the idea of it because it almost feels too real, and the laser is sensitive to anybody trying to cross the trap, which makes it even more exciting!

If you have children of different ages who are always fighting because of the privacy issue especially, this is a great option.

If the Spy/Lazer Trap Alarm set is out of your price range, then you could go for the DYNASTY TOYS Robot Bug. This electronic spider toy is super exciting and could be enjoyed by all family members.

You could even purchase several of those bugs and compete with each other on who’s bug wins! One of the greatest things about it is that it’s compatible with any laser gun, so you could use it with any that you already have.