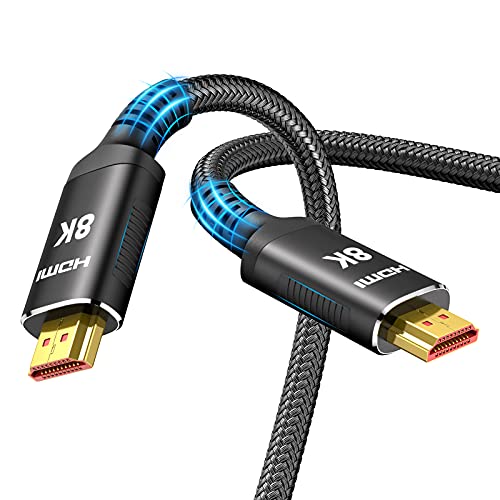 Ever since the HDMI® Specification 2.1 was introduced, people have been asking, “Is HDMI 2.1 backwards compatible?”

This update was designed to support higher video resolutions and refresh rates. You’ll be glad to know that it is backwards compatible.

Let’s dive right into the details.

Yes, it is. Any device that has a previous generation of HDMI technology can be connected to an HDMI 2.1 device and it should work just fine.

For example, if you want to connect Xbox One to a new 8K TV using HDMI 2.1, you won’t face any problem doing so. The size and connection type of HDMI cable jacks and ports don’t change.

Being the latest update, HDMI 2.1 can handle a lot of information and translate it into 8K or even 10K resolution. However, this is the least exciting thing about this update.

With HDMI 2.1, you can enjoy higher resolutions with better frame rates. Think 4K resolution at 120Hz, 8K at 60Hz, and 10K for commercial and industrial purposes. On the contrary, HDMI 2.0b allows a maximum resolution of 4K at a frame rate of 60Hz.

HDMI 2.1 is a fantastic option for gamers, as it promises smoother graphics and motions. The film industry also greatly benefits from this version, as movie directors seek to deliver high frame rate content to the big screen.

HDMI 2.1 introduces dynamic HDR to new flavors, such as HDR10, to deliver better HDR experiences to TVs and other devices.

While HDR10 is also attainable with HDMI 2.0b, it is not officially supported. With HDMI 2.1, it is official, which ensures 100% reliability.

HDMI 2.0b introduced the Audio Return Channel (ARC), allowing the audio to travel back and forth on an HDMI cable between a TV and a soundbar or an A/V receiver. However, it offers limited bandwidth, meaning the audio can be reduced to stereo, producing low-quality sound.

This feature simplifies the system setups, enabling you to connect everything to your TV and run a single HDMI cable to the soundbar to enjoy high-quality audio. On the one hand, you’ll get better sound while on the other, fewer cables will reduce clutter!

As mentioned earlier, HDMI 2.1 supports higher frame rates for smoother video effects. On top of that, it offers variable refresh rates, taking the gaming experience to the next level.

As you’d know, modern PCs use multiple frame rates. The rates may accelerate or drop throughout the game. If there’s a mismatch between the game’s frame rates and what your computer can display, you’ll have to deal with lag, frame tearing, and judder.

This happens when you play VRR games on HDMI 2.0b with a non-VRR capable display. This is where HDMI 2.1 comes in, equipping your TV with the ability to be your ideal big-screen gaming partner.

ALLM highlights the signal from a PC or game console so that your TV is prepared for it. The display may automatically turn off visual processing that can  cause lag or latency.

Thanks to HDMI 2.1, you won’t have to turn the Game Mode on on your TV again.

Quick frame transport is an incredible feature that reduces the time required by a video frame to move from the source to a display. This is perfect for gamers tired of dealing with lag. If you like to play fast-action games, you’ll love this feature.

VR users can enjoy the reduced time between movements and to immerse into the world seen through their goggles fully.

Gone are the days when people struggled with syncing the video from their TV with the soundbar audio. This problem occurs when the TV has to do heavy processing and audio processing takes less time than video processing.

Theoretically, yes. However, it may not be possible to achieve this practically.

You do have the option to firmware upgrade premium chips to HDMI 2.1 but these usually come with crazy price tags.

Also, your HDMI 2.0b may not have such a chip built into it, making the conversion impossible.

HDMI 2.1 provides a much higher bandwidth, faster gameplay, and better audio quality. It supports up to 10K resolution to upgrade your home entertainment experience.

Furthermore, we have good news for readers wondering, “Is HDMI 2.1 backwards compatible?” If you have an older set that doesn’t support the latest version, you can still enjoy using HDMI 2.1, regardless of the speed of your device. This means you don’t necessarily have to buy Ultra-High-Speed HDMI cables right now.

Even if you have a TV with 4K resolution, you should be able to use HDMI 2.1 with your current cables without any hassle.