With gadgets getting smart and storing user information, unlike before, the need to lock modern devices has never been as critical as it’s currently.

Luckily, manufacturers are aware of the risk of theft. As a result, every electronic item you can think of can be locked to negate unauthorized access—be it smartphones, laptops, TVs, etc. Projectors aren’t left out either.

Although the notion of prohibiting entry into projectors isn’t as widespread as perhaps it is on mobile devices, the provision does exist. Locking a projector is also a pretty straightforward, although multi-step, process.

However, the big problem most users face with locking mechanisms is not being able to unlock the device—maybe because they don’t remember the password or mistyped the code multiple times to lock themselves out.

And such situations arise with projectors too.

In this article, we shall discuss just that. Keep reading to log in to your BenQ projector again.

What Does a Locked Projector Mean?

Before throwing light on how to unlock your BenQ projector, let’s first understand what a “locked projector” is.

A locked projector means you can no longer access the device’s operating system until you manage to go past the built-in security layer.

Kindly note that the projector doesn’t come locked as default. You have to activate the option. Because projectors are not usually locked behind a passcode, most projectors will not even prompt you to lock the device.

But you can always dig into the device’s security settings and create a password to enable the locking feature.

Here is a video demonstrating the password setup process for your BenQ projector:

Reasons Why Your BenQ Projector Gets Locked

The following are some reasons your BenQ projector is locked:

If your projector is password-protected and you input the wrong secret code multiple times (usually three), the projector would lock you out on security grounds.

If the standard password doesn’t work or there’s no provision to do that, try the following steps:

The screen shall now pop up a message seeking a password.

Refer to the user manual if you don’t know your projector’s default password. If you enter the wrong password and lock yourself out again, repeat the above process.

Make sure the default password you enter is correct because there are only so many times you can restart the projector and input the password.

If you enter the wrong password multiple times or above a specific limit, the above method will not work anymore since the projector would have hard-locked itself.

In that case, contact the nearest BenQ service center with the recall code shown in the Recall Password window on your projector screen.

What if the “projector is locked” message doesn’t go?

If reconnecting the power cord and powering the device takes you to the same “projector locked” prompt, wait for around 10 to 15 minutes before plugging in the projector and powering up the device again.

If your projector still doesn’t show the default lock screen, you have no option but to contact BenQ customer support.

A locked BenQ projector could also mean locked hardware buttons on the remote or the projector itself.

And when that happens, try unlocking the projector by long-pressing the Enter key on your projector for a few seconds.

The message indicating your BenQ projector is unlocked shall appear on the screen right after.

Some BenQ projector models may require a long press on one of the volume keys. Check the user manual to be sure of the key for your projector.

If the issue is with the remote’s buttons, press the “home” button for a few seconds or any volume keys.

1/ Can I physically lock a BenQ projector?

If your BenQ projector comes with a Kensington lock port, as they do on laptops, you may literally lock the device so that there’s no one running away with your device when you’re busy doing something else. 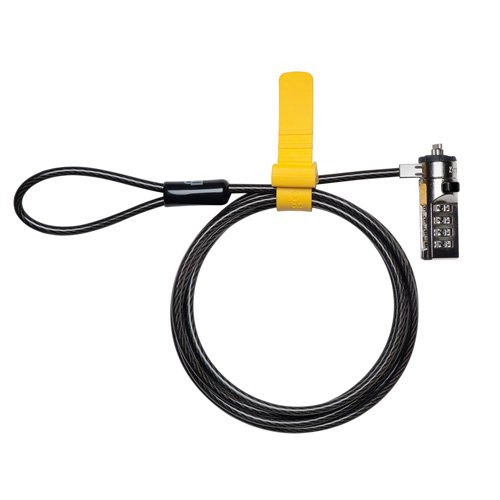 The physical locking mechanism comes in handy when using the projector outdoors so that there’s no fear of someone stealing your digital projector or accidentally knocking it down.

If you’re someone who uses projectors outside of their homes, a Kensington lock is a solid investment, provided your BenQ projector has the provision for it.

Here are some of our Kensington lock recommendations if you’re looking to buy one:

Kindly note that Kensington locks have a pretty standard design (including the above), irrespective of the devices they get used on.

2/ Will my BenQ projector get locked if the lamp has issues?

Typically, that is not the case, even if your projector lamp is well beyond its ability to light up images at total capacity or is close to detonating.

When your projector bulb gets old, the device will let you know through a warning light or message.

In some cases, however, your projector could lock itself up as a safety measure when lamp usage has crossed the threshold so that you do not continue using the projector with the diminished lamp and cause untoward incidents.

Irrespective of the circumstances under which your projector is locked, unlocking it is nowhere as tricky and complicated as unlocking a carrier-locked phone.

Generally, you can unlock a BenQ projector by yourself using the above methods. And if you’re not successful, there’s always BenQ support to fall back on.