Own a projector? You’ve likely come across the term keystone correction.

Below, we’ll explore what keystone correction is and how to ensure you’re doing it right.

But even more importantly, we’ll show you how to avoid keystone correction in the first place.

This way, you’ll get the image right from the start. And you won’t have to adjust different settings on the projector to get the picture to look balanced.

What Is the Keystone Correction?

If you don’t set up the projector in the perpendicular way we’ve described in the two sentences above:

Instead, you’ll get a trapezoidal image where two sides of the image are non-parallel, and parts of it appear elongated. So the picture looks distorted, what is known as the keystone effect.

Keystone correction refers to the adjustment done on the projector to correct keystone distortion and restore the image to its original shape.

The adjustment can be manual or digital.

Projectors that support manual keystone adjustment have buttons to facilitate the correction.

These buttons are often on the control panel. But they could also be located elsewhere on the projector, depending on the model.

Most projectors have four directional keystone correction buttons. So you press the up, down, left, or right button to adjust the vertical or horizontal angle.

But some other models have a knob , which you turn clockwise or counterclockwise to adjust the horizontal angle of the image. Such projectors may have an extra knob for adjusting the vertical angle.

Digital keystone correction is less taxing. The adjustment settings are built into the projector. So the device automatically detects when the keystone effect is at play and automatically corrects it.

You don’t have to do anything to aid the process except check that keystone correction is set to Auto. To do that, go to Keystone Correction under Settings and select AUTO.

Since projector menu options vary from model to model, for your projector, this option may read Auto Keystone Correction. If this is the case, set it to ON.

While some projectors have both vertical and horizontal keystone correction , others may only offer one option. So you want to confirm what the projector supports before buying it. 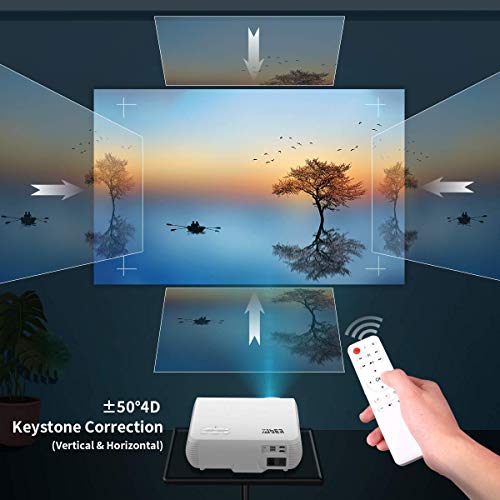 Yes, in some cases, it’s necessary to carry out keystone correction. We’re talking about situations where the image is severely lopsided.

It would be impossible to enjoy watching content where the pictures look skewed. So you use keystone correction to adjust the shape of the images.

When the distortion is very slight and barely noticeable, you may not see the need to use keystone settings to correct the image. So you could opt to view the content as it appears.

Or try alternative corrective measures like adjusting the positioning of the projector or screen.

In this case, re-positioning the screen or projector centers the image, giving it an even, square-like or rectangular frame.

How To Avoid Keystone Correction Adjustment?

The only way to avoid keystone correction adjustment is by getting the projector and screen alignment right from the start. It’s not always easy to do, but it’s achievable.

You would have to ensure that neither the screen nor the projector is at an angle when you set them up. That means paying attention to where and how you install both.

Here are three ways to achieve this:

Wherever you’re setting up the projector screen, ensure it is level.

If you’re projecting onto a wall, door, ceiling, sheet, etc., keeping the screen level usually depends on how this background surface is structured and finished.

And even when mounting the screen , your best result lies in using a plumb and level wall or ceiling.

When plumb, the surface is vertically flat, meaning it’s straight when assessed from top to bottom or vice versa.

When the surface is level, it is horizontally flat, meaning it’s straight when assessed from left to right or vice versa. (That is, from side to side.)

If the surface isn’t level or plumb, it’s almost impossible to avoid the keystone effect. And this applies to any surface you use as a screen, not only walls and ceilings.

Keep the projector square with the screen

Think you’ve done a decent job of mounting your projector? Because setting up the projector is where the rubber meets the road.

If you don’t set the projector right, at some point, you’ll probably deal with keystoning.

Check your mounting distance and position the projector to cast onto the center of the screen. It shouldn’t veer off to the side, whether horizontally or vertically.

You’ll likely try out different positions to figure out the changes you should make.

The first time you set the projector, cast an image onto the screen, and notice that the image is tilted, you’ll be able to tell whether you should:

Keep adjusting the projector’s positioning until it is squared up and the image appears centered on the screen.

Take note of the projector offset

Some projectors have a fixed offset. The projector offset is a metric that determines the position of the image on the screen with respect to the lens centerline.

The manufacturer calculates and determines what the offset should be during manufacture. So it’s not something you’ll calculate or figure out on your own.

And they specify what the offset is for both ceiling-mount and table-mount installations. You can find this crucial bit of information in the product details or specifications, which are all in the manual.

As long as you take the given offset into account when setting up the projector, you’re likely to bypass the keystone effect. Hence, you won’t need to make any keystone correction adjustments.

Keystone correction is a corrective mechanism embedded in the projector. It works to eliminate the keystone effect and restore the shape and form of the image.

The keystone effect occurs when you project items at an angle, causing the image on the screen to be off-center.

It is necessary to do keystone correction when the picture:

But you can avoid keystone correction adjustments by setting up the projector to align with the center of the screen.