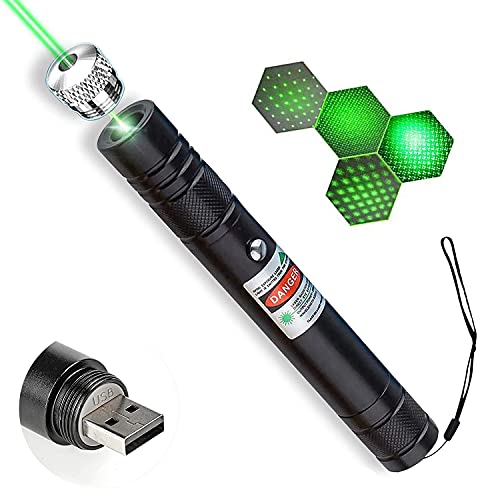 Laser pointers have become a go-to tool for presentations and reports done in both academic and corporate settings. However, as manufacturers make this equipment more readily available to users, the risk of deliberate or accidental misuse also increases.

Most laser pointers are equipped with a Class 2 laser, which emits visible light limited to a maximum output power of 1 milliwatt (mW). These lasers are relatively safe to use than higher classes. However, they may still cause injury when mishandled.

If you’re asking yourself, “how strong is a 1mW laser pointer” this article is for you.

Read on to learn more about 1mW laser pointers and the different laser classes.

How Do Laser Divergence, Power, and Wavelength Affect Hazard Distance?

Hazard distance is essentially the distance that determines when a laser becomes safe and/or dangerous to users.

For a complete chart of laser types and parameters, you can check out this link.

It can be increased and decreased, depending on three influencing factors, which are:

Let’s take a closer look at these factors and define them.

Laser divergence refers to the “beam spread” of a laser. This can also be referred to as the light distribution of the laser.

Lasers with a less concentrated divergence point are less likely to cause injury from a short distance. This likelihood may increase the closer a subject gets to the laser.

Laser power refers to the optical power output of a laser. This is typically measured in mW (milliwatts). Higher laser power may increase divergence, which can shorten the laser’s hazard distance levels as the beam spreads faster and wider.

Strongest LASERs in my collection | Power and wavelength measured

Laser wavelength refers to the color of the laser light and is typically measured in nm (nanometer). Human eyes are most sensitive to green light, which is why it’s encouraged that users buy laser pointers with red or orange lights to avoid possible injury.

Here are the five (5) classifications:

Class 1 lasers are typically found in laser printers, CD players, geological survey equipment, and laboratory analytical equipment. Most class 1 laser devices contain class 2 or higher lasers, but because they are contained in a protective casing, they aren’t considered high-risk devices.

If a Class 1 laser device is altered, the risk of laser exposure and injury increases.

Class 2 lasers are typically found in laser pointers, aiming devices, and other range-finding equipment. These devices use up to 1mW of power or less and can cause eye injury if misused. Avoid pointing lasers directly into people’s eyes. Furthermore, try not to direct laser pointers on reflective surfaces, as this can still reflect the laser beam onto another person.

Class 3R lasers are considered the “intermediate-level” lasers that hold between 1mW to 5mW of power. You typically see these lasers in devices like laser pointers and laser scanners. Staring directly at 3R lasers can cause severe eye damage and irritation.

Class 3B lasers have a power output of 5mW to 500mW and are still considered intermediate-level lasers. They’re often for spectrometry, stereolithography, and entertainment light shows. Again, staring directly into them can cause significant vision damage and, therefore, should be avoided at all costs.

Class 4 lasers have an output power of >500mW, making them the strongest laser class in terms of consumer-grade lasers. This type of laser is most often used for surgery, research, drilling, cutting, welding, and micromachining. Direct contact with the beam can cause skin and eye damage more severe than those caused by other laser classes.

So, how strong is a 1mW laser pointer?

Is a 1mW laser pointer dangerous?

If misused and with prolonged exposure, yes.

But according to the World Health Organization (1998), people who are exposed to a Class 2 laser “will be protected from injury.” This is due to our eyes’ natural blink reflex that causes our eyelids to involuntarily blink in response to irritating lights or reflections.

How far can a 1mW laser go?

In 2019, a San Antonio man was arrested for allegedly shining a pocket laser at a passing airplane, disorienting the pilots in the cockpit. This airplane was flying over 40,000 feet above the ground.

Studies show that a red laser pointer viewed from 100 meters away has a beam that’s 100 times wider and brighter than a 100-watt light bulb that’s viewed from 3 feet away.

If you were to look at a laser from 40,000 feet in the air, the pointer would be as bright and as large as a quarter moon.

Studies have yet to be conducted on how far a 1mW laser can go exactly, but if you’re asking if it can go as far as the moon, then you’d probably be disappointed with the results.

Can a 1mW laser pointer blind you?

A 1mW laser pointer can be classified as a Class 2 or Class 3R laser. So, while it’s not as strong as other laser classes, it is still strong enough to cause injuries such as flash blindness. Flash blindness is a temporary or permanent vision impairment when the eye is exposed to a light/flash of extreme intensity.

Laser pointers can be a great tool to use in presentations and conventions. However, it’s important to keep in mind the hazards that come with its usage. Remember to never point the beam directly into anyone’s eyes. Furthermore, don’t dignify your curiosity by looking directly into the laser beam.