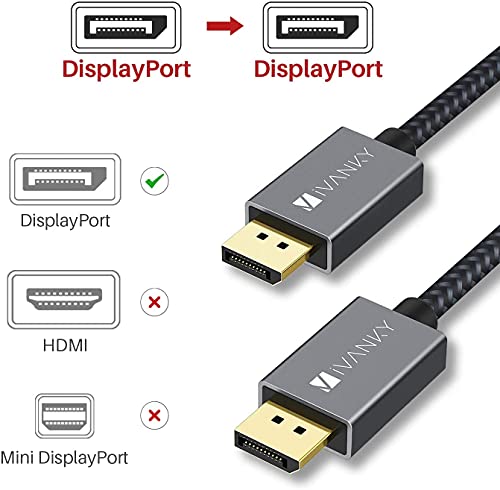 The FPS, or frames per second, a video plays at is very important. It can determine how pleasant your viewing experience is and if the movie or television show is even worth watching.

DisplayPort technology is common in the gaming world. It lets gamers play high-resolution games with fast-moving graphics at ease. Finding out the amount of FPS a cable can transmit is a crucial step when setting up an at-home media station.

Here is what you need to know about DisplayPort’s FPS capabilities.

If you were to look at a roll of film, you would notice it’s made up of thousands of pictures that change ever so slightly. Played quickly, those pictures turn into a movie. Each picture is called a frame, and although digital videos don’t have physical rolls of film, they do work similarly to the old-school cinema days.

The frames per second for a video or DisplayPort determine how smooth the video is. If a video is being transmitted at just 12 fps, it’s going to look choppy and disjointed.

How Many FPS can DisplayPort Handle?

Like HDMI cables, there are several DisplayPort generations. The DisplayPort technology has been around since 2006 and there have been a lot of innovative changes to the cables and connectors made in the last 15 years.

The most recent DisplayPort generation is the DisplayPort 2.0. It can handle 120 frames per second, which is impressively fast. You will be able to play virtually anything with this DisplayPort cable without any lag or video quality issues.

The DisplayPort 1.4 cable can handle 60 frames per second. That’s still considerably high and you should have no problems enjoying media at that speed.

Moving onto the DisplayPort 1.3, this generation can play videos at 120 frames per second, but only for 4k videos. If the resolution is any higher, it will drop to 30 frames per second which is too low, especially for video games and sporting events.

In summary, you will be able to enjoy almost any type of video with any of the previously mentioned DisplayPort cables. That is a testament to how reliable DisplayPort technology is and explains why gamers prefer connecting their devices with DisplayPort cables instead of HDMI cables.

Does DisplayPort Give More FPS than HDMI?

An HDMI 1.4 is not strong enough to enjoy several kinds of feature films and will not work for gaming.

This is why people prefer DisplayPort for gaming.

That’s not to say that HDMI isn’t good technology. It transmits audio and video very well and is relied on by several brands to transmit information from one device to another. If you’re trying to play Youtube or Netflix from your computer onto a large monitor or television, a recent HDMI cable will work perfectly.

We highly recommend getting an HDMI 2.1 or 2.0 if you haven’t already. The HDMI technology has improved vastly in the past few years, so you will need a recent cable to reap all the benefits of HDMI.

What is Better for FPS: HDMI or DisplayPort?

This is a tricky one, because it depends on what you are watching and how you’re watching it.

If you’re gaming, you should use DisplayPort cables and connectors. They will give you the crisp, seamless image you need to stay focused on the game and not get distracted by glitching video.

However, if you’re just trying to watch a movie at home, an HDMI cable will do the trick. It’s also easier to get devices fitted with HDMI ports than to find ones with a DisplayPort. Sometimes, all we need is to throw something on a big screen and relax, so HDMI cables provide that convenience.

No! DisplayPort does not affect performance negatively! Otherwise, it even enhance your viewing experience!

DisplayPorts have a lot of advantages over HDMI. They are faster and don’t risk lagging as  HDMI cables do. You also don’t need to worry about having the most recent DisplayPort cable generation, which makes setting your movie, television show, or video game up a lot easier.

If you have the choice between HDMI and DisplayPort, go with the DisplayPort.

This DisplayPort 2.0 can play up to 120 frames per second. It is the fastest DisplayPort on the market right now and will satisfy all of your gaming and media needs. It comes in several lengths from 3.3 feet to 10 feet. If you’re concerned about the cable lasting, we recommend going for a shorter one as those have a reputation of lasting longer.

To Wrap Things Up

DisplayPort technology isn’t talked about as much as HDMI technology is. In our opinion, we think people are missing out by only relying on HDMI cables and connectors.

Why settle for average video and audio quality when you could enjoy the best out there? The number of frames per second on a cable is a clear way to distinguish how new and reliable the product is going to be.

If you have a PC, have a look at the ports on it. If there’s a port that looks like an HDMI port but isn’t, it might be a DisplayPort. If it is, you’re in luck! Go grab yourself the cable we mentioned and start enjoying the best video resolution on your television or projection ASAP!

Gamers should especially look into DisplayPort cables as they’ll be able to tell the difference almost immediately.

Do you like DisplayPort or HDMI technology more? What is the minimum FPS you like to watch? We’d love to know in the comments below!