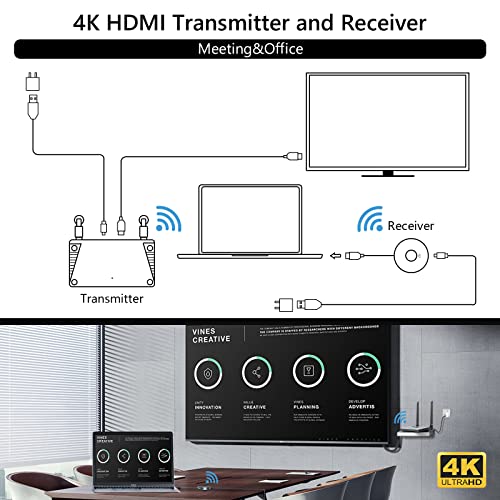 Perhaps the two greatest advantages wireless HDMI technology has over HDMI cables are: getting rid of cable clutter and giving some mobility/location flexibility.

Connecting your HDMI devices wirelessly is easy, as you’ll see later in this article.

It doesn’t take much brainpower or muscle power. And you can do it, whether this technology has been on your radar for some time or you’re hearing of it for the first time.

So what exactly is wireless HDMI?

Wireless HDMI technology uses electromagnetic frequency to transmit HDMI signals between the source and the display. It relies on transmitters and receivers to make the connection between the two devices.

You can connect more than two devices, but there is a caveat: devices must be within the supported range.

Can HDMI Be Transmitted Wirelessly?

You can wirelessly transmit:

And the devices can be in the same room or in different rooms, often on different floor levels.

Most wireless HDMI kits can transmit signals through walls—which is how you’re able to get the frequency in another room—but some cannot send the frequency through a wall. 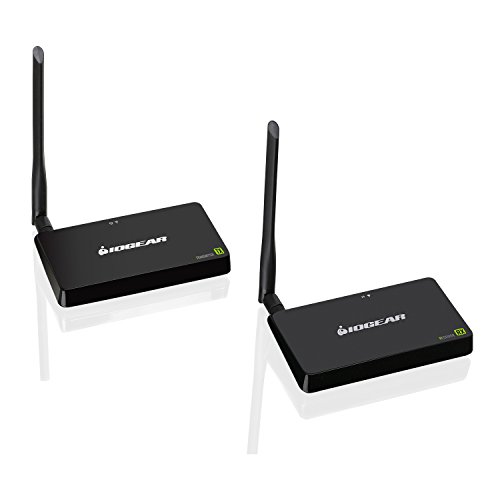 When buying a wireless HDMI kit, it’s a good idea to confirm what objects could block the signal, if any. That will help you get the setup right.

One other thing to note is that the transmitter-receiver pair supports a limited range.

The range could be anywhere from 20 feet to over 600 feet. All connected devices should be within this range (Note that the distance shortens the more you move across rooms.)

Connecting devices wirelessly is an easy process that involves a minimal number of gadgets and cables.

Wireless HDMI devices can comfortably transmit video in 1080p at 30-60 Hz. Not all support 4K, though, so you must be particular about the model you choose and ensure it can transmit 4K video .

As with any wireless connection, there is a lot that can interfere with your wireless HDMI transmission. In the home and office settings, the most notorious of interferences is Wi-Fi.

If interruptions affect the transmission, try lowering the resolution to 720p or lower and the frequency rate to 20 Hz or 30 Hz.

How Does Wireless HDMI Work?

Wireless HDMI technology relies on a transmitter and a receiver to exchange HDMI signals between devices.

A source device sends the signal to the transmitter.

The transmitter encodes the signal and sends it to the receiver using electromagnetic frequency.

The receiver then decodes the signal and feeds it into the display.

You can use this technology with any device that supports HDMI. That can be your cable box, Blu-ray player, DVD player, gaming console, computer, etc. And you can use any HDMI display, be it a TV, monitor, or projector.

To send the signal to the transmitter, you have to use an HDMI cable.

That’s where the HDMI cable comes in.

The cable goes from the source device and into the transmitter. The transmitter does its magic and sends the frequency to the receiver.

In turn, the receiver decodes the signal and presents it in a format the display can recognize.

Now, to get the signal into the display, you again use an HDMI cable.

Both the transmitter and the receiver have to be plugged into a power source. Here, they draw the energy they need to run.

In most cases, especially with newer wireless kits, the transmitter and receiver draw power from the source and destination devices. Just plug the USB power cable they come with into the HDMI device, and the transmitter/receiver will start charging.

Whether you can plug the transmitter or receiver into your HDMI devices for power depends on how much power they draw and whether the source/destination device can sustain the supply.

If the devices cannot provide enough power to run the transmitter or receiver, plug the transmitter/receiver into the adapter it comes with and into an electrical outlet or power strip.

Consult your user manual to determine how you should power your wireless kit.

For some wireless HDMI kits to successfully connect, they must have line of sight.

That means the placement of your connected devices must follow the same straight line. If a device deviates even by a few inches, you may not get a connection.

Many of these kits also use infrared transmitters, which make it easy for you to remote control the devices from a distance.

What Is a Wireless HDMI Streaming Device?

Because of the streaming, most people might assume that a wireless HDMI streaming device must have an Internet connection. Streaming is broadly understood to mean that the content you’re watching is delivered through the Internet.

Now, there are devices that you can connect to a wireless HDMI transmitter and then to Wi-Fi to stream content from the Internet. Good examples are Apple TV, Roku TV, Chromecast, and Fire TV Stick.

That’s the standard way of connecting such streaming devices.

You can also connect them directly to a wireless HDMI transmitter instead of the TV.

Wireless HDMI - Now You Can Stream From Your Streaming Devices Wirelessly - NO MORE HDMI CABLES!!

Make sure the streaming device is connected to Wi-Fi.

The receiver will decode the signal from the streaming device via the transmitter the same way it decodes signals from any other HDMI device.

This way, you can access and stream content wirelessly. At that moment, such a device becomes a wireless HDMI streaming device.

How Do I Connect My TV to HDMI Wirelessly?

To connect your TV to HDMI wirelessly, you’ll need a wireless HDMI kit.

With this package, you’re ready to connect your TV.

If you don’t have an empty USB slot on the source device, connect the power cable to the adapter and plug the adapter into a power source.

The transmitter and receiver will connect automatically—this can take a few seconds. And any content you play on the source device will show on the display screen.

If you wish to connect more displays to the same source, you’ll need additional receivers, since each display requires its own receiver.

The technology uses electromagnetic frequency to transfer the content.

And it uses a transmitter and a receiver to connect to the source and destination.

That’s all the equipment you need to transfer HDMI wirelessly.

Turn on all the devices—including the transmitter and receiver. Your content should flow seamlessly from the source to the display.