The word “ghosting” has different meanings in different contexts.

In a relationship, “ghosting” is people not turning up at a place after setting up the meeting mutually. A partner not responding to your calls and messages and severing all contacts with you is also ghosting.

Ghosting in the projector context assumes a different meaning. It’s got more to do with how it projects visuals on a projection screen.

In this article, we’ll briefly introduce you to ghosting in projectors.

And if it’s a problem you’re facing with your device, we’ll talk about the causes and how to address it.

Keep reading to beat the ghost out of your projector.

What is Ghosting in Projectors?

Ghosting is a dual or shadow image that appears on the projection screen.

The duplicate visuals or shadowy images are usually seen in a particular portion of the screen and not throughout or across the entire screen. However, in some cases, it could be all across.

Not to mention, with old LCD projectors, the above issues are pretty standard.

Commonly confused with ghosting, the rainbow effect is usually an issue with DLP projectors as they use a color wheel that rotates in sync above the DLP chip. When the synchronization dance misses the tune, the picture becomes slightly dim, less colorful, or causes the rainbow effect—which is different colors projecting separately.

Don’t mistake it for ghosting.

Why Does Ghosting Happen in Projectors?

Ghosting in projectors could be due to the device’s internal hardware or external factors.

It’s typically caused by how the projector is set up. Faulty or improperly plugged-in cables, and mismatched video resolutions (projector and input source), are primary external causes.

When using intermediary devices, such as an extension/junction box or transmitter, those accessories may not be fully able to transfer the original signal through to your projector, causing the ghosting problem.

The following are some specific causes discussed in some detail.

Leaving the Screen On for Very Long

If you are familiar with OLED screens, you know that leaving the screen on for long periods can result in some aspects of the picture being embedded into the display.

This is why the “always-on screen” function on smartphones doesn’t have the clock and notification elements fixed in one part of the screen. They are constantly moving so that there’s no burn-in.

Similarly, image retention or ghosting can occur when projector screens are left on for hours or days together.

Suppose the cable overlaps with other wires or is close to lines connecting to other devices. The resulting signal or electromagnetic interference could cause shadowy pictures or mirages on the screen.

The following are likely the issues with cables:

Based on the type of cable used (VGA, USB, DisplayPort, HDMI, etc.), the above issues could exacerbate your concerns or lead to minor problems.

If your projector and its input source are connected wirelessly, the video signal may encounter problems during transit or at the destination point.

Some projectors, namely smart projectors, can be connected to your phone, laptop, or speaker wirelessly. Note that the source device must also support a wireless connection for this function to work.

If your projector is old-school (A/V or VGA), hook it up with a wireless dongle to connect to your Wi-Fi network, download the required apps, and work as a computer with projector functionalities.

As the article’s focus is not to guide you on how to make wired projectors wireless, we’ll not delve into that anymore.

However, the point is signal issues exist and the resulting ghosting issues exist with wireless connections too, whether the projector is inherently capable of wireless transmission or is a VGA device made wireless with a dongle.

The most common internal reason for ghosting is an inadequate or aging lamp. An issue with the lens may also lead to ghosting, but that’s very rarely the case.

When the projector lamp approaches the end of its lifespan, it doesn’t just stop working cold turkey.

The very first sign is it losing its sheen. And when you ignore that because you didn’t notice the dip in brightness, more noticeable issues such as loss of color, lines, ghosting, etc., may begin to surface.

How Do I Stop My Projector from Ghosting?

Now that we’ve discussed the probable reasons your projector is projecting ghosting images, let’s go over a few solutions.

If you don’t want to or cannot turn it off because you want it to be ready for use anytime (for instance, in a corporate environment), alternate between solid white and black screens with no text or image.

The different colors would have a minimum strain on the LCD pixel. A complete white screen with the backlight dimmed is usually recommended.

Also, an alternating pixel checkerboard arrangement could be more effective than a fixed pattern.

Switch Up the Cables

Buy good-quality cables if the ones you currently use are worn-out or you don’t have the proper wires. Also, don’t tie them up together.

However, you’d most likely see picture quality improvements when switching from a faulty cable (that caused the ghosting issue) to a new line.

The signal inconsistencies cause the ghosting or internal reflections to interrupt the primary signal. The ghosting is most likely a reflection of the direct signal darting back and forth within the cord.

If the signal were not confined to the cable’s diameter, it would have traveled further and not bounced back to disturb the original signal.

That’s why a new cable could make the images look better.

Talking about cable length, look for cords no longer than 25 feet. Fifty feet is the maximum length an HDMI cable can be without significantly impacting signal strength. But then, that’s stretching it to the limit.

Regardless, such lengthy cables are usually hard to find at stores or online. You may take that as a sign of “non-reliability” with longer cords.

If you need a longer cable than the norm, look for the “powered” ones. 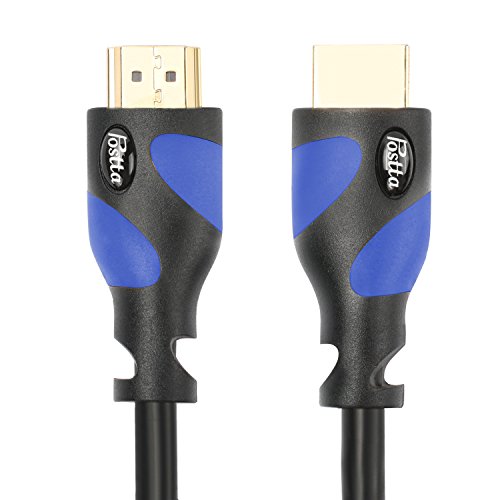 A powered HDMI cable, for instance, has a built-in processor or internal signal booster that draws energy from a discrete power supply or the connected device’s HDMI port to send the signal further a lot more effectively.

The point at which signal strength dips in non-powered cables is precisely where a powered cable actively pushes forward the signal.

Here are some powered HDMI cables for your consideration:

Only consider the above if you’re looking at cable lengths more than 50 feet (usually greater than that).

Opt for a Wired Connection

Although wireless connections are convenient, they often come at the cost of quality.

Try plugging in the devices if you suspect your projector’s ghosting concerns could be due to the setup’s “cordless” nature.

But if using cables doesn’t feel practical for your setup, inspect your Wi-Fi dongles or Bluetooth adapters, and ascertain if replacing them could fix the issue.

Maybe the Wi-Fi dongle could be doing a lousy job of receiving the airborne signals and transmitting them to the projector.

Consider replacing the lamp if it’s old or damaged. A bulb that’s still under warranty could be replaced for free.

If it’s out of warranty, it’s still no issue as projector bulbs aren’t too expensive. The price, however, varies depending on the projector type and range.

As a rule of thumb, if the new bulb costs more than 50% of the projector’s price, buy a new projector altogether, particularly if the device is a fairly old machine.

Could the projected image have inherent ghosting issues?

If you see ghosting, it’s most likely the projector or the cables and other accessories part of the setup causing the problem.

To confirm the ghosting is not due to the actual content, project some other content onto the screen and see how they appear. The issue is confirmedly projector-related if the other visuals are also ghosting.

To conclude, ghosting in a projector is primarily due to the cables or the lamp.

If your projector is a few years old and you’ve never replaced its bulb, the ghosting is likely because of the lamp.

An old projector’s ghosting concerns could also be due to the cords used, especially if the ones you’re using came bundled in with the projector.

Ensure you replace your projector lamp when needed.

If you use your projector day in and out, find out the number of hours clocked on the lamp and see if it’s anywhere close to its claimed lifespan. But just don’t take those numbers at face value since other aspects such as heating may be hard to quantify.

Similar is the tale with cables. If they were bought only a year or two ago and don’t look worn-out, try eliminating all possible ghosting causes before blaming the wires.

If you’re still unclear, get in touch with the device manufacturer for more personalized solutions to your problem.