With all the excitement and appreciation for the HDMI cable, it’s hard to imagine any of its limitations.

For most of us, having an HDMI cable is already enough to play audio and video.

But what if you have a vintage stereo or Dolby Digital surround sound setup that you would like to play audio on?

In most cases, an HDMI cable won’t cut it because these devices need an analog signal or an audio-only source. And since HDMI transmits audio and video together, we need something that splits the two up.

If this is the first time you’re hearing of this, we’re happy to introduce it to you.

So, by the end of this post, you can look for the best HDMI audio extractor that works for your home setup.

What is an HDMI Audio Extractor? 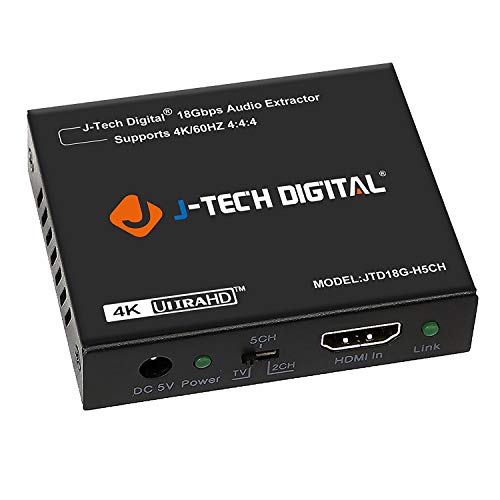 HDMI, or High-Definition Multimedia Interface, is a single cable that sends high-definition audio and video. Unlike the old setup where you have a VGA cable and an audio cable, an HDMI cable brings all of these in one.

Needless to say, it can be connected to a wide range of devices — TVs, soundbars, consoles, streaming devices, and more.

So, how does an HDMI audio extractor relate to all of this?

Say you have a vintage stereo that doesn’t have any HDMI ports, or has a Dolby Digital surround sound setup that only requires an audio signal.

In the first case, the lack of an HDMI port on the stereo will force you to look for a cable that has an HDMI on one end and an audio cable on the other. Unfortunately, there’s no such cable that exists, so you’d have to get a device that can connect those two cables

In the other scenario, you’d need a device that separates the video and audio signals transmitted by an HDMI cable because the sound setup just doesn’t receive video.

For both situations, you’re going to need an HDMI audio extractor. This device receives the HDMI signal and separates the video and audio signals that go through it. 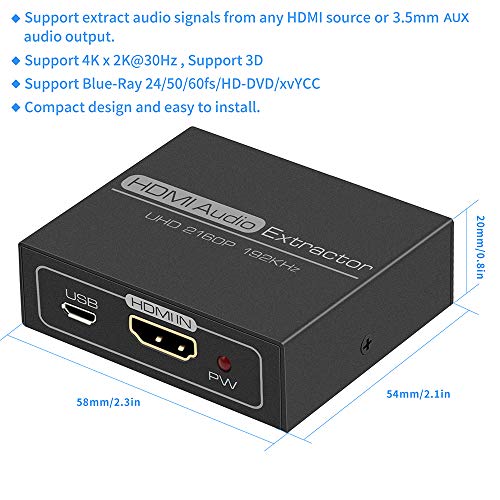 This way, you can separate the connection of your audio and video receivers while still being able to use them separately.

In the two situations above, connecting an HDMI audio extractor will allow you to play audio on your stereo.

This is because it can connect with old audio cables and split up audio and video, letting you use the audio signals for your surround sound setup.

What Do HDMI Audio Extractors Do?

An HDMI audio extractor splits the video and audio signals that it gets from an HDMI cable and sends it to a video-only and an audio-only cable that’s connected to it.

For example, you’d connect an HDMI cable to an HDMI audio extractor. What happens here is that the device isolates the digital video and audio signals.

The video signals remain digital, while the audio signals are converted to analog. Hence, audio signals coming from an audio extractor can be played by analog-only devices, such as old stereos.

Likewise, the digital signal that has video can still be played on a TV or monitor.

Do HDMI Audio Extractors Cause Lag?

In general, there shouldn’t be any lag between your audio and video.

Since we’re still using a digital signal for video, there shouldn’t be a difference in performance compared to when an HDMI cable is directly plugged into the TV.

This is one of the best characteristics of HDMI cables — it uses a digital signal that’s not sensitive to a lot of interference.

On the other hand, the digital audio signal from an HDMI cable changes when it passes through an audio extractor. Audio signals are converted to analog or 5.1/7.1 Dolby Digital surround sound signals. 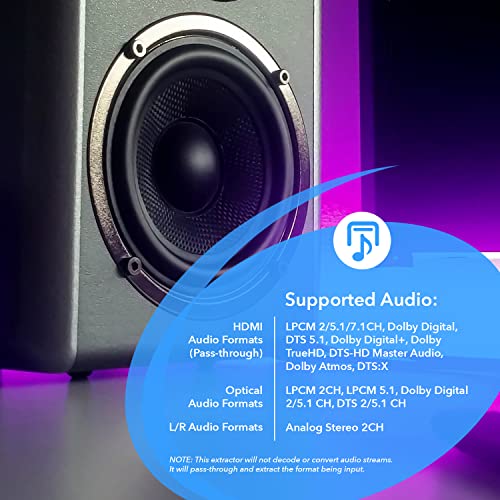 And unlike digital signals, analog signals are easily affected by cable quality, so you must pick a cable that uses good-quality materials.

Do You Need an HDMI Audio Extractor?

Not everyone is going to need an HDMI audio extractor.

If you don’t have an audio device that requires an analog signal or a separate audio setup, then you don’t need to buy this device.

Since HDMI cables transmit both audio and video signals, it doesn’t make any sense to buy another device that splits the two, especially if they’re going to be connected to the same device.

For example, if you have a console and you wish to play the audio and video from your TV. You don’t need an HDMI audio extractor here because you don’t have a separate audio setup to use.

However, if you have a separate stereo or a speaker that you want to play audio from, this is where you’ll need an HDMI audio extractor. 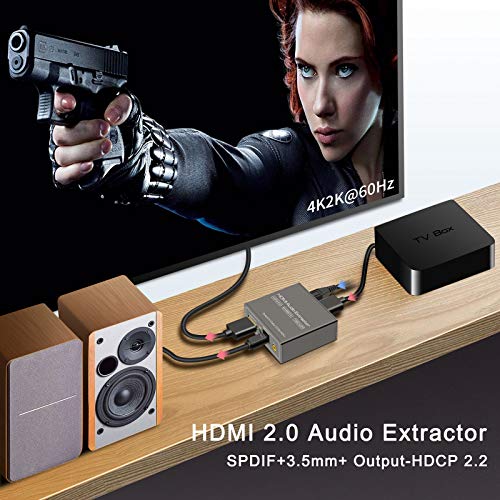 How to Use an HDMI Audio Extractor?

Most, if not all, HDMI audio extractors need a power source, so it’s best to place this near a plug or extension cord.

Once you have that, you’ll also need an HDMI cable that connects from the source and an audio cable that will send audio signals to your receiver.

Once you have those cables, you can just connect one end of the HDMI cable to the output port of your source. Then, connect the other end to the HDMI input port of the audio extractor. 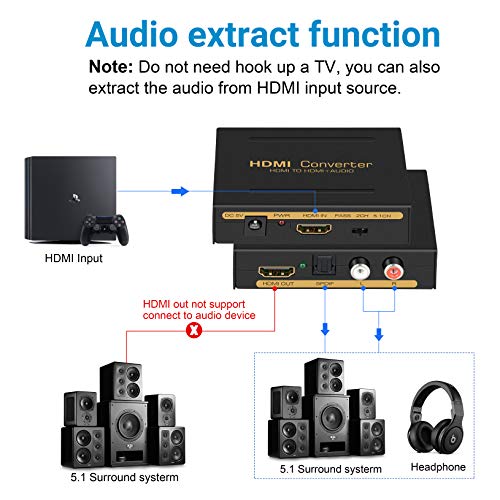 To start the “splitting” process, just plug in the HDMI audio extractor and turn on your devices, that way the whole setup can send and receive signals to the right devices.

How to Choose a Good HDMI Audio Extractor

Speaking of good-quality materials, let’s talk about how to choose a good HDMI audio extractor.

Like we said, analog signals are sensitive, so it’s best to choose the right device that protects this signal.

Here are factors to consider when choosing an HDMI audio extractor:

Most HDMI audio extractors will just have one HDMI input port.

If you have several devices you wish to connect, it’s best to choose an audio extractor that can be connected to the number of devices you have.

While you can always plug and unplug, over time, this can damage both the HDMI cable and the port.

To make sure that you prevent any damage done to your accessories, choose an HDMI audio extractor that has more than one input port. That way, you can plug several HDMI cables simultaneously. 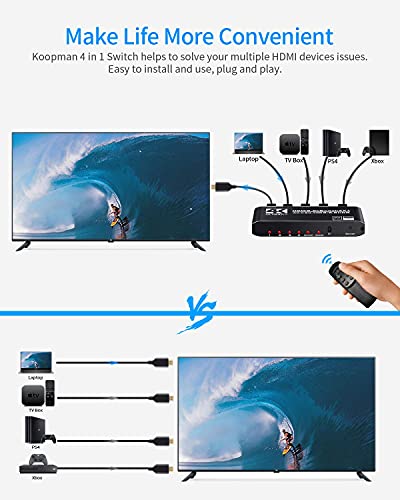 While you’re at it, we recommend checking the output ports available on your HDMI audio extractor.

Make sure that the HDMI output is either an HDMI 2.0 or 2.1 output. This way, the cable can handle sending digital video signals to high-resolution TVs without lowering the refresh rate.

The HDMI output port has more to do with maintaining or improving the overall video quality.

But when it comes to audio, you have to look for an HDMI audio extractor that has jacks for optical S/PDIF and stereo analog. 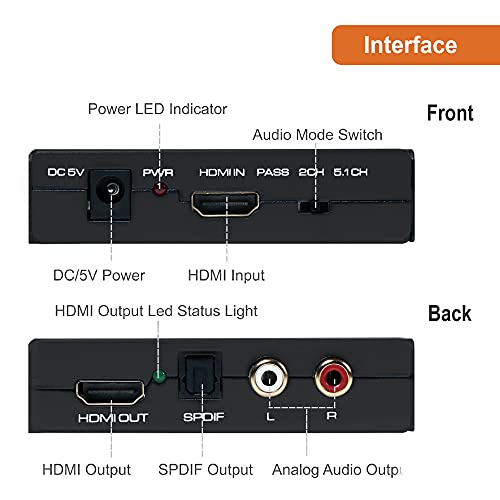 When you have these audio ports, you can connect to a stereo (via analog signals) and Dolby Digital surround sound devices.

Did you know that if your HDMI cable exceeds 50 feet, its signal starts to degrade?

While it’s unlikely for you to have a source and a receiver that are 50 feet apart, it’s still a good practice to know if the HDMI audio extractor can support HDMI cables at a certain length.

We suggest that you identify the distance between your signal source to the receiver (can be a stereo, soundbar, etc). This will help you know how long a distance the audio extractor should be able to support.

In the age of online shopping, we highly suggest that you research the best HDMI audio extractors that have great reviews.

While there are lots of models found on Amazon, we recommend going for a tried-and-tested brand that is known to have no audio lags and is durable after long-term use.

Reviews and ratings help us determine if an audio extractor is high-quality. Needless to say, we’re relying on a lot of social proof to give us an idea of how good a device’s performance is.

If you have a stereo that only accepts analog signals or a Dolby Digital surround sound setup at home, a regular HDMI cable will not be compatible with them.

With an HDMI audio extractor, you get the benefits of retaining the video signals from your HDMI cable while also converting the audio signal to a compatible signal for your audio setup.

The only thing that you need to do is find a reliable HDMI audio extractor that has enough input and output ports that can connect to all your devices!