To connect your laptop computer to an external monitor, you need I/O (input-output) ports such as DVI, HDMI, and DisplayPort.

But the connecting standard that pretty much started it all was VGA. It laid the foundation for the ports after it, including HDMI and DP.

VGA is now considered archaic in the tech world but is not yet obsolete. And people who continue to use their older monitors are still using the VGA port because maybe there’s no alternative.

Unsurprisingly, VGA is showing its age, particularly when it comes to screen resolution. VGA doesn’t support 4K or even 2K the way HDMI and DisplayPort do.

Unfortunately, if you use a monitor with a VGA port, you’ve got to live with that resolution limit.

However, there are a few things you could do or ensure to render the overall experience better. Please keep reading to learn what they are.

But before that, let’s get to understand VGA a bit more.

VGA (video graphics array) is an analog-based video output standard. The connector it uses has a 15-pin, three-row arrangement.

Three years later, in October 1990, IBM came up with XGA that supported 1024×768 resolution. Over the years, the resolution capability increased.

The Shortcomings of VGA

VGA is a reasonably old video output standard on the verge of declining. The following are some of the reasons for its waning popularity:

Because VGA uses analog signals, it’s a pariah in today’s times where the tech world runs on digital connections and communication standards.

Modern devices that use digital standards, such as HDMI and DisplayPort, do not seamlessly pair with VGA due to that analog-digital mismatch.

For instance, although monitors still come with DVI and VGA connectors, modern laptops and desktop PCs only have DisplayPort or HDMI.

You may use VGA-to-HDMI adapters, for instance, to establish the connection between the devices.

But that’s one extra cable or accessory thrown into the mix that you can easily sidestep with a straight HDMI connection.

Not to mention, the adapters could be power-hogging and still lag a direct digital connection in terms of performance.

If you’re using a relatively long VGA cable to display Full HD content, it’s quite likely what you see on screen may not look like 1080p.

If video limitations weren’t hindering enough, here is another major drawback with VGA: no audio transmission.

Though VGA cables come with integrated audio support, such as this Cable Matters VGA Cable with Audio, it seems like a complex solution to a reasonably straightforward problem. 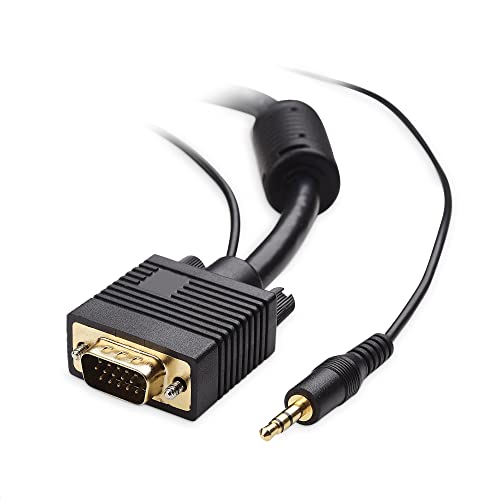 VGA certainly is limited in terms of its resolution and refresh rate numbers. But poor visuals on a VGA monitor are not always due to the video output standard.

As mentioned earlier, VGA was introduced in 1987. Back then, televisions and external monitors weren’t cutting-edge.

And that has been the case throughout VGA’s heydays and until the standard waned in popularity. In short, the displays they’ve been paired with have always been shoddy.

By the time high-quality displays with increased screen resolution became popular, other, more capable video output standards had already made a mark.

If HDMI and DisplayPort hadn’t happened, advancements could have been made with VGA, and the standard may not have been limited to the 1080p at 60 Hz refresh it currently maxes out at.

How to Improve the Display Quality of Your OLD VGA Monitor?

There are a few things you could do or must ensure to improve the display quality or performance of your VGA monitor. They are:

If the system-wide resolution of the monitor is not correct or set to its highest, the visuals may not come out right.

Set the highest resolution the monitor supports and check if that makes things look better. It should, usually.

Ensure the VGA Port is Good

VGA is a pretty capable video output port at its core. There aren’t issues inherent to the standard.

Therefore, if the visuals you output through the port are blurry, maybe the port is broken.

If the VGA port on the monitor is okay, check the cable and its connector head. Make sure those aren’t damaged either.

Each VGA connector pin has a unique role. For instance, the first, second, and third pins transfer the colors red, green, and blue, respectively.

If even one of those pins has issues, the signal quality will be affected.

Therefore, replace the cable if there are VGA connector or cord concerns.

Here are some excellent replacement cables to shop for:

If the cable is old but in pretty good physical condition, get a new cord regardless to rule out any possibility of foul cable play.

Since VGA is analog and there’s signal degradation, ensure the distance between the computer and monitor isn’t very long.

If cutting down on the length is not an option, try using the HDMI or DisplayPort connector since digital signals usually have no trouble traveling long distances.

Use the Other Port

Computer monitors usually have multiple video output ports. Even monitors that are a decade old are likely to have HDMI or DisplayPort accompanying VGA.

Suppose those other, more capable connectors are working fine. There’s no reason to use VGA over them then—that is only if the different port offers a noticeable improvement in video quality.

Use an adapter, if necessary. Here are some that may suit your requirements:

An HDMI to VGA converter, for instance, comes in handy if your video card or laptop uses an HDMI port and the monitor has a VGA output port.

Are VGA Monitors Still in Use?

Yes, there are, and shall continue to be so for some time.

These monitors, however, are small (24 inches or less), such as the following:

If you’d like to buy a VGA monitor with a bigger screen, there are fewer options:

Smart TVs do not sport a VGA port, except maybe for a few.

Also, the latest and greatest graphics cards do not come with VGA ports anymore. They use HDMI pretty much all the time.

Why Has the Industry Not Completely Ditched VGA Yet?

There’s no disputing that VGA is on the decline, and the time when new monitors no longer sport the VGA port isn’t very far.

Major monitor makers, such as Samsung, LG, and Asus, having little to nothing to offer in the form of VGA-equipped monitors, indicate the standard’s not-so-bright outlook.

But there’s a reason why VGA is not entirely out yet.

Back in the day, when VGA was fresh from the oven, it was a relatively complex standard to comprehend and incorporate into devices.

Times have changed, however, and technologies have become a lot more advanced.

That means VGA is no longer the byzantine of a connecting standard it was once perceived to be.

Moreover, as mentioned earlier, many people are still holding on to their VGA monitors.

Companies cannot leave behind those users by discarding the VGA standard altogether.

By the way, the video resolution capabilities of VGA are not as bad as one would imagine, particularly if you’re not comparing it to the powers of the more modern standards.

Another pertinent point is VGA doesn’t miss out on any key feature or functionality. It can do everything the DVIs, HDMIs, and DisplayPorts can accomplish.

It’s just that VGA’s capabilities are at a grade or two lower.

Audio transmission capability is the only thing VGA doesn’t have built-in. But then there are workarounds for that, as stated earlier.

To reiterate, monitors and other devices with VGA ports are declining. However, that has been the industry trend for quite some time now.

VGA should have been gone for good already if it was that bad. But it’s not, and they are understandably still holding on.

And looking at the number of users not letting go of their VGA monitors, the standard would likely stick around for a few more years.

If you own a monitor with a VGA port, it’s not advised to discard it or trade-in the device just because its connector is “outdated.” You may very well use it as your secondary monitor.

Display quality will always be a concern, but there could be some respite if you try to improve things.