There are several networking cables. But most of them are obscure or rarely used, which gives the impression that there are only a handful of wires to connect TVs to a satellite dish or a computer to a router.

Ethernet is a commonly used cable. Similarly, fiber-optic cables are gaining quite a bit of traction. But the two cables that have been around for quite some time and possibly household networking cables are from the HDMI and coaxial stables.

These cables are so omnipresent that you would have certainly heard of them. But the question is, do you “know” them beyond their names? What purposes do they serve, after all? For answers to the questions and more, keep reading.

What is an HDMI Cable?

Before HDMI, digital audio and video interfaces were discrete, with DVI as the video interface and optical cables (and others) handling audio duties.

DVI cables are not obsolete. But due to their inability to transmit audio signals, they’re no more the standard like HDMI cables.

Multiple HDMI versions have come out since its initial release on April 16, 2022, ushering in greater speeds and performance upgrades. Those enhancements, however, haven’t brought about any changes to the HDMI cable design.

HDMI 1.4 was released in May 2009. HDMI 2.1 was launched in November 2017. Despite the eight-year gap, the two use identical HDMI cords. HDMI 2.1 cables are backward-compatible with HDMI 1.4. But there are HDMI connector types—more on them later.

Although all HDMI cables look the same, they aren’t identical in all aspects. The major differentiation is in the bandwidth or the signal transfer speed they support. Below are the types starting from the latest.

HDMI cables are backward and forward-compatible, provided the connectors match. HDMI cables use different connectors, which vary in size and according to devices.

For instance, digital cameras primarily use mini-HDMI ports that do not work with standard HDMI connectors. Here are the various HDMI connector types:

What is a Coaxial Cable?

A coaxial cable is four primary components built into one seamless cord.

The outermost or fourth layer is called “sheath,” which is basically made of fire-resistant plastic or PVC.

Right beneath the sheath is a braided metal shielding to tackle EMI. Underneath that protection is a Teflon or PVC insulator, referred to as a “dielectric plastic insulator.”

The core is a copper conductor wire or primary channel transmitting the signals.

The shielding design of a coax lets the cable’s copper core transmit information at high speeds without damage or interference from the external environment.

Hardline coaxes have a copper or silver-made center conductor. The conducting wire is the thickest of them all. A flexible coaxial cord has a flexible polymer surrounding the inner conductor; therefore, it’s called “flexible.”

Semi-rigid cables have a solid copper external sheath, and formable coax cables are alternatives to the semi-rigid wires. They employ a flexible metal outer sheath instead of solid copper.

Twinaxial cables, as the name alludes, comprise a couple of core conductors and one dielectric and outer core. The cord is best-suited for low-frequency video and digital transmission.

Rigid coax lines are composed of two copper tubes. They employ disk insulators or PTFE supports at their ends and critical junctures across their length.

True to their name, rigid coaxes do not bend. They are primarily used in FM and TV broadcasting applications.

Coaxial cords come in various specifications, with each description serving different purposes. The abbreviation “RG” (radio guide) and a number tag along to denote specifications and characteristics.

The RG-6 specification, for instance, is associated with cable TV or internet connections. It has a 75-Ohm impedance.

RG-8 cables are similar to RG-6; however, they cannot transport pure video signals. With a 50-Ohm impedance rating, the line is mostly set up in radio stations, audio control rooms, etc.

HD televisions and TV antennas use RG-11 cables as the cable offers increased space for signal transfer. It’s a higher gauge, 3 GHz, 75-Ohm cord. Based on the RG numbers, the lines vary in diameter and pliability.

Signal loss is not a significant issue with coaxial cables. But depending on the cable’s specifications and length, performance may vary.

Connectors and adapters, however, can come to the rescue and help prevent signal loss beyond a certain length.

Coaxial cables with varied specifications don’t look very different from each other on the outside. But the cable’s girth usually gives it away if you know what to look for. If that doesn’t help or to confirm, check the text markings on them or their boxes.

Here is a table listing the key attributes of the common coaxial cables:

BNC, which stands for “Bayonet Neill-Concelman” or “British Naval Connector,” is a miniature RF connector with a quick connect/disconnect feature.

SMA (SubMiniature Version A) connector is a minimal coax connector interface with a coupling mechanism resembling a screw.

SMB (SubMiniature Version B) are smaller than SMAs, not as robust, and come with a snap-on coupling mechanism. They are ideal for use in/with antennas, base stations, computer systems, and GPS.

A TNC (Threaded Neill-Concelman) connector is a BNC connector’s threaded version. It’s weatherproof and boasts up to 11 GHz. The connector is primarily used in RF antenna and mobile phone connections. 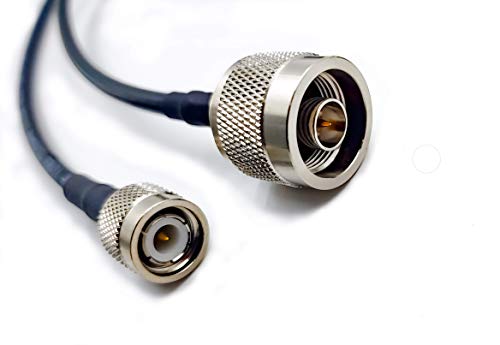 LMR cables are similar in design to regular coaxial cables, with only a few attributes setting them apart.

For example, the aluminum foil tape is directly bonded to the insulator, providing excellent shielding and functioning as a moisture and weather shield.

Also, the outer polyethylene jacket is more heavy-duty to offer better protection from the weather and UV rays and a longer lifespan.

Below is a table listing out the basic differences between HDMI and coaxial cables:

Note: HDMI 2.1’s maximum data transfer rates of 48 Gbps are among the highest in the industry.

Should I Run an HDMI or Coaxial Cable?

HDMI cables are more mainstream than coaxial cables, primarily because the former is a lot more advanced features and performance-wise. On both the audio and video front, HDMI supersedes coaxial cables.

The biggest drawback with coaxial cables is their lack of support or bandwidth for Dolby TrueHD, Dolby Atmos, DTS-HD Master Audio, DTS:X, and other advanced surround sound formats.

No doubt, modern home cinema lovers will find a coax quite limiting. HDMI allows lossless audio format playback. But a coaxial cable could be the better choice if you need a cable purely for audio or music listening.

Because coaxial cables handle audio signals so well, you can still find them behind some integrated amplifiers, AV receivers, and TVs.

Yes, coaxial cables are more affordable than HDMI by length or foot. However, HDMI makes up for the high cost by offering much greater bandwidth than a coax.

Which HDMI Cable Should You Buy?

Since HDMI cables are backward-compatible, it’s recommended to buy HDMI cables with the latest specifications or the highest bandwidth support.

Buy new cables only if you have none. If there’s already one lying in the drawer and it is working fine, you don’t need a new cable, even if the existing cable is built to HDMI 2.0 or 1.4 standards and not HDMI 2.1.

Buy an HDMI 2.1 cable only if you are sure the old cord is not up to speed with the new HDMI standard.

The biggest talking point of HDMI is its ability to transmit both audio and video data at the highest quality. Coaxial cables can do video and audio too, but not at the level of HDMI. For instance, 4K video transmission is not plausible with coaxial cables.

Also, because one HDMI cable can do it all, it is more practical and a regular fixture on TVs, AV receivers, Blu-ray players, soundbars, etc. If you have used RCA cables, you will be able to relate to the convenience factor.

The other good thing about HDMI is that it’s constantly evolving. HDMI 2.2 is on the horizon, which will usher in much greater capabilities and performance.

Introduced during the mid-1900s, coaxial cables are relatively old. But the biggest knock against them is that they have had no significant improvements over the years in terms of technology and performance.

Because HDMI is more modern, capable, and multi-faceted, it wins this battle. But if you think otherwise or prefer coaxial cables over HDMI, that’s fine too.