Laser Tag was invented in the 80s by a passionate businessman, George carter. His model inspired many producers to devise their own versions of the game, and one of these is Hasbro inc.

Hasbro, Inc. is one of the biggest toy manufacturers worldwide, second only to Mattel. They introduced Lazer Tag shortly after George Carter popularized the game, and then they reinvented it in 2012 to suit the smartphone generation.

It’s a two-player game of tag that can also be adjusted to fit 10 players, or a single-player honing his skills with the video game module. The rules are simple: tag or be tagged.

Who Is This Product For?

The Hasbro Lazer Tag game is intended to be suitable for all ages. Kids love it, teens find it exciting, and college students have a blast playing laser tag. It’s also great that anywhere can be a play field.

It’s not difficult to understand, and it doesn’t pose any safety issues for the little ones, so they can easily arrange a group game, or play against one another.

It’s not messy like paintball, and it provides lots of fun in the dorms and as a party staple.

Family gatherings are great when they include fun group activities, and Hasbro Laser Tag is a perfect choice.

Workplaces have been rife with Laser tag face-offs, usually to single out the colleague who’d bring in doughnuts for the coming week. It’s nice for bonding and releasing the extra pressure.

Here’s our starter guides about how to play and win a laser tag game!

Grandparents were seen playing it with their children and grandchildren. It’s a family game that spreads cheer and excitement, without much setup, and even better, without much cleaning up afterward.

Unlike darts or paintball, Laser Tag is clean and safe. That’s why it’s popular with all age groups, and generally played anywhere.

The 2 taggers are usually enough for a good two-player game, but laser tag is a game of little crowds, and Hasbro knows this so they sell extra taggers separately. 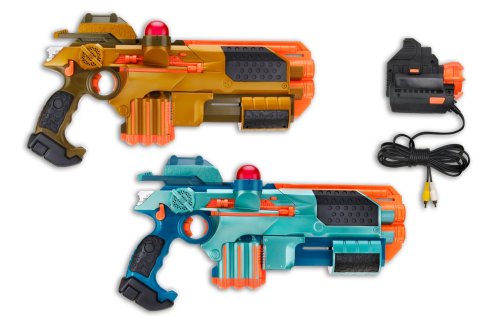 These are the main features of the Hasbro Lazer Tag set:

The taggers are designed to convey a realistic game experience. This is done by giving each function a distinct mood. Reloading, shield, tagging, and of course being tagged is a 3-D experience.

The beauty of the Phoenix tagger is really evident in the ammo and reloading effects. Each ammo clip gives ten shots, and there’s an LED to display how much is left.

This certainly adds an edge to the game, as you watch the last of your ammo disappearing and the other players running about tagging you.

Once the last LED blinks out, the sound of the trigger changes and you know that you need to press the thumb switch and release the ammo core.

Now you’re ready to reload a new clip, and there are of course more sound and light effects to dramatize the whole process.

You can also reload in the middle of a clip; you don’t need to wait till it empties completely. This gives more room for strategizing during the game.

It can be played as a solo, individual players, or team modes. The SHOT BLAST attachment is added for multiple tagging, which varies the way the game is played right away.

The number of available tags can be adjusted from 10 to 25 tags. This gives an advantage to a beginner or younger player over the others, which levels the field a bit.

It can also be changed to give different scenarios, where the players live through varying levels of duress. It has to be set at the start of the game though.

The Lazer Tag can be adjusted for playing indoors or outdoors. It can reach up to 300 ft, which gives a very wide playing field. It can also account for daylighting or night settings.

When the game is played indoors, the IR light can bounce off the different surfaces, and throw the game off. That’s why there’s a setting to make it suitable for playing inside closed areas.

It’s a very nice addition to the game set, as it makes it possible for a single player to keep on playing. There’s a catch though, it can’t be connected to HDTVs, Plasma TVs, or Projection TVs, just the good old CRT TVs, which are almost obsolete nowadays.

The Nerf set is very close in appearance and function to the Hasbro Lazer Tag set, which is natural as Hasbro acquired Nerf a few years ago.

The main differences are in the contents of the set, the size of the guns, and the price. The Hasbro has an extra home video computer game console, which the Nerf set doesn’t, and this reflects directly on the price.

The size and shape of the guns are also different, Nerf’s version is larger and more sophisticated in terms of sound effects, light responses, and an actual recoil feeling.

The Hasbro Lazer Tag set carries on the legacy George Carter started back in 1980, when he created Laser tag. It’s a lively game that brings people together in a fun and dynamic way.

There’s no limit on who can play Laser Tag, or where it could be played. The generations merge inside the good times it offers, and the outdoors is as good as the office when it comes to an impromptu game of Lazer Tag.

It’s a nice set to have, starting with the basic two tagger box, and upgrading to a full player collection. We certainly recommend this game to anyone looking for a lot of fun and a healthy dose of adrenaline.