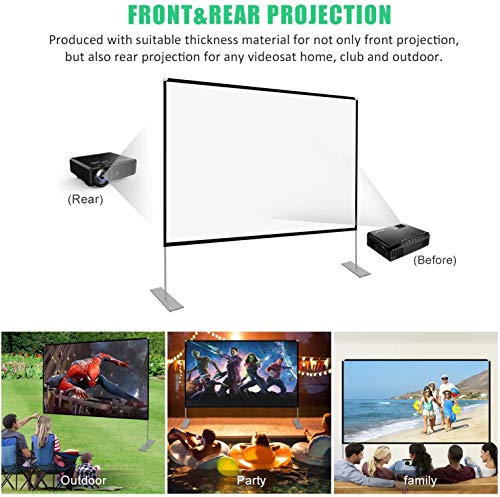 Front and rear projections are common styles of projection. But you cannot determine which is better if you do not know how each of them works or the features that make them different.

This article discusses the difference between these projection styles, their pros and cons, as well as their use cases.

This is the most common type of projection. The projector is placed on a table, on the floor, or mounted on the ceiling. It is positioned in front of the screen, which may be portable or permanently installed on the wall.

In front projection, the light from the projector hits the screen, but is reflected back to the viewer. This type of projection is cheaper because it requires no special screen.

The projection area is usually clustered, since all the devices are in front of the screen. If wired projectors are used, the cables are usually visible.

The projector casts lights on the screen. The screen diffuses the light through itself and directs it towards the viewer at the opposite side. Most times some amount of light is also reflected back to the projector and is lost in the process.

Rear projection gives a bright, clear and sharp image, it prevents shadowing when projecting, and it also minimizes the noise from the projector. This makes it suitable for places like museums, theaters, and churches.

However, rear projection requires a special projection screen, which is usually expensive.

It is the opposite in rear projection; there is a better contrast and image quality when the ambient light is high. To achieve the best image, make sure that the light hitting the back of the projection screen is controlled or contained mainly behind the screen.

For front projection, as the viewer moves further off to the side the image becomes more distorted, and the higher the screen gain, the narrower the optimal viewing angle becomes.

In rear projection, the viewing angle depends on the screen material. That is, it depends on how well the material can diffuse light through itself.

Since in rear projection, the projector and other devices are kept behind the screen, there is usually little space available in front of the screen.

But in front projection, the projector as well as the other devices is positioned in front of the screen, so there is enough space available, especially when the projector is mounted to the ceiling, or the screen is fixed on the wall, and the speakers or soundbar are placed high on a shelf.

Both projection styles give the same brightness level when done in the right environment, and with the right screen.

However, light interference and the projector’s distance from the screen, can cause a decrease in the image brightness.

Front projection does not need a special projection screen; regular screens can be used. These screens are easy to get, and are readily available in online stores.

It cannot be concluded that one projection style is better than the other, since each has its pros, cons, and use cases.

For instance, rear projection is more suitable for making presentations, while front projection is better when projecting in a small room.

Before choosing, consider the cost of setup, the space available and the amount of light interference that you may encounter. Also consider the availability of the projection screen.

Note that there are screens that support both front and rear projections, although they are a bit pricey. The projector type should not be a problem because most projectors support both styles of projection.