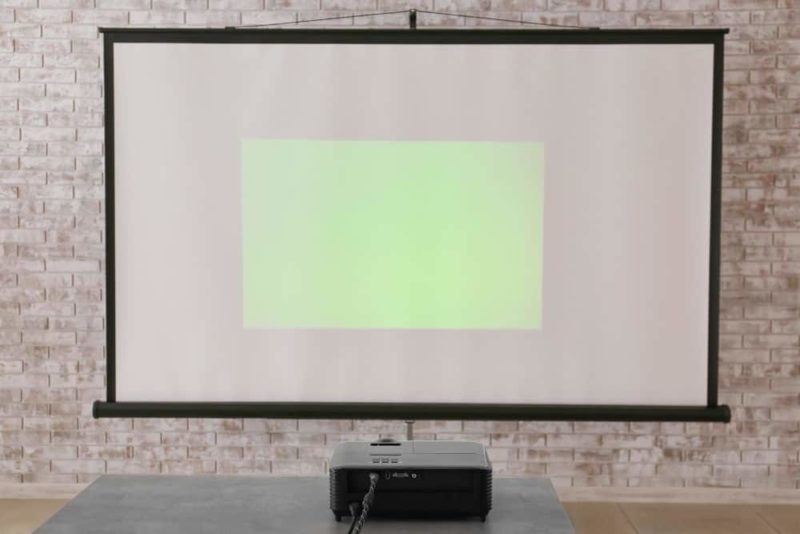 When buying a projector, it’s vital to learn more about its features before swiping the card. Get to know the lamp and its rated hours, lens size and quality, warranty, after-sales support, and more.

Since projectors are still not as “mass-marketed” like TVs, there’s quite a bit of ambiguity and esotericism surrounding them. For instance, “lens shift” is a feature the general buyer likely does not understand.

Experienced users may be familiar with the term, but they may also not fully understand what the function can and cannot do.

This article intends to be the lowdown on lens shift. We are particularly interested in learning how lens shift impacts visuals and the overall projection experience.

If you are too, keep reading.

What is a Lens Shift? What Does It Do?

The term “lens shift” denotes a projector lens’ ability to move vertically, horizontally, rotate and project an image from those off-axis angles without disturbing the image’s geometry. It’s called ” variable lens shift when the lens moves horizontally, vertically, and diagonally.

Projector lenses can move both ways, and also several move either up and down or sideways—mostly vertically.

Here is a video giving a brief glimpse of how a projector that’s placed on the floor moves the image up to fit the screen:

Lens shift is an excellent feature to have in a projector if you’re not keen on spending time and effort deducing the mathematics of installing a projector.

But before you take off your thinking hat, do note that not all projectors have lens shift capability—particularly single-chip DLP and most budget projectors. It’s not clear why DLP doesn’t have it. Maybe it’s got something to do with the projector’s internal layout.

Three-chip DLP devices, however, are capable of lens shift. But then, the range of movement is pretty limited compared to LCoS or 3LCD projectors.

Yes, lens shift does distort the picture, but that depends on how extreme the shift is. When implemented well and the lens is good quality, there’s barely any discernible distortion.

Some projectors permit moving the lens beyond the usual range to deal with unfavorable placement conditions or very acute angles. Such “extended range,” which cause the lens to be very close to the outer limits of the lens barrel, may heighten image degradation possibilities.

Cheaper Lens and Dial Action Could Spoil the Fun

The image aberration issue is usually more pronounced with cheaper lenses, as alluded to above.

High-quality optics (not necessarily the expensive kinds) with relatively larger diameters fare much better. At times, premium-priced projectors fail to achieve what their more accessible counterparts do.

The distortion problem could also be due to the lack of synchronization between the physical dial and the lens itself.

The lens response to the dial action may be noticeably laggy, or the dial could require more rotation than usual to make the lens move, making it difficult to position the lens at a particular angle.

Annoyed by the issue, users may give up, not getting the angle right.

Yes, lens shift negatively impacts picture quality. But again, it may not be as significant as some may imagine. In fact, lens shift does pretty okay most times.

Minimal shifting usually doesn’t pose issues. But if the lens veers near the edges, the picture could get impacted.

Some projectors limit the degree of lens shift to have no adverse effect on the image. Luckily, quite a few are designed to function that way.

Why is Lens Shift Problematic?

Lens shift is usually not a concern. But when implemented wrongly, it could be an issue.

Generally, projectors perform the best when the lens is right in the center of the barrel. Problems likely arise when there are deviations from the center.

For instance, Internal reflections occur when the lens moves closer to the opening’s edges. In other words, the light projected through the lens may ricochet off the surrounding surface and back to the lens.

Is Lens Shift Better Than Keystone?

Yes, lens shift is theoretically and practically better than keystone.

Although lens shift and keystone serve pretty similar purposes – altering the projected image’s shape and positioning without relocating the projector – they go about that in their own ways, with the former almost always doing a better job.

For those who don’t know, keystoning adjusts the image on the screen digitally, stretching or squashing a misaligned image’s edges to make it fit within the canvas. It doesn’t move the lens itself.

The digital compression technique to modify the pixels by the edges causes artifacts along the image’s corrected portions. But because lens shift happens at the hardware level, there are no such concerns.

Although keystone has come a long way since inception and newer projectors do keystoning better than their predecessors, image sharpness continues to be a concern with the technique.

The OIS and EIS of Projectors

Both EIS and OIS strive to lend steadiness to a video recording or take in more light for a brighter image. But OIS does a much better job since it fiddles with or moves the lens apparatus to achieve the goal.

Keystone, on the other hand, alters the images at the software level before the projected image can pass through the lens.

Keystone Does Well with Lens Shift in Tow

Not to mention, keystone works better when used in conjunction with lens shift. Lens shift can do all the hard work, and keystone can provide the finishing touches.

Keystone offers a broader correction angle with the lens shift backing it up, allowing up to 50% and 30% modifications to height and width, respectively.

For example, if the screen is 120-inches wide, a 30% width adjustment would mean added width of up to 36 inches. That stone, keystone adjustment is usually not needed with lens shift on active duty.

Note: Before the optical lens shift in projectors became a thing, keystone was solely responsible for helping users align their projector images.

Do I Need a Projector with Lens Shift?

You do not “need” a projector with lens shift capabilities. As mentioned earlier, DLP projectors don’t usually do lens shifting, and those devices are still quite relevant.

But depending on your home theater setup, space, and projector placement, lens shift may become necessary.

For instance, lens shift turns into a must-have feature if you can’t mount your projector with the correct offset to the screen.

Can you add lens shift capabilities to a fixed lens setup?

Currently, there isn’t any method for adding lens shift function to a rigid projector lens. It may be possible in the future.

Using keystone functions or physically moving the device are the only alternatives as of now.

Lens shift is a handy feature to have in a projector. It lends a lot of flexibility. But when pushed to the extreme or not implemented well, it could hamper the visuals projected.

Therefore, ensure you’re using the feature sparingly or when you genuinely need it. Do not set up your projector diagonally to the screen because you can later employ lens shift to correct any alignment issue.

If you can position the device on a table or mount it to a ceiling at the right height or set it relative to the screen’s center, go that route.

Do not be casual about the setup process on purpose or when installation is not complex, hoping lens shift would make amends later.