“Does my projector put my health at risk by giving off radiation?”

Projectors have become widely used due to their many benefits. We must ask questions to ensure that they do not put viewers at risk.

Owning a device that endangers your health is never worth it. This is especially true for radioactive devices.

Do projectors give off radiation? This is the question that this article will answer in the coming sections.

But before we get to that point, we will provide a base knowledge of what radiation is. Follow to ensure you grasp the basics.

Radiation is energy that comes from a source. It travels through space and may be able to penetrate various materials.

There are two types of radiation:

Non-ionizing radiation is a form of radiation that possesses low energy. Its energy is not enough to cause ionization.

This radiation can move atoms in a molecule around or cause them to vibrate. However, its energy is not enough to remove an electron (negative particle) from an atom or molecule.

On the other hand, ionizing radiation is a form of radiation that possesses a high amount of energy.

It has enough energy to knock tightly bound electrons out of atoms. This process is referred to as ionization.

Due to the fact that ionizing radiation can affect atoms, they are harmful to people. At the most basic level, human beings consist of atoms.

Ionizing radiation can damage body tissue and DNA in genes. Their effects can result in terminal health complications.

Exposure to ionizing radiation, however small, affects your health negatively. It puts you at great risk.

Exposure to high levels of ionizing radiation can cause severe effects such as skin burns or radiation sickness (acute radiation syndrome).

It can also result in long-term health conditions such as cardiovascular disease and cancer.

On a daily basis, we are exposed to low levels of non-ionizing radiation (visible light).

Do Projectors Give Off Radiation?

The radiation from screens and projectors belongs to an extremely low frequency range of the electromagnetic spectrum.

Beginning at the lower end of the spectrum, we move from long wavelengths to short wavelengths, or from low energies to high energies.

After these, we approach the part of the electromagnetic spectrum containing visible light: red, orange, yellow, green, blue, indigo, and violet (ROYGBIV). This is the visible spectrum.

Moving from this point, we get to the ultra violet, and then x-rays, gamma rays and cosmic rays.

Ionizing radiation is the type we are concerned about since it damages the cells. It creates ions that lead to cell damage, cancer, and cell death.

We are not concerned about non-ionizing radiation. These are shorter wavelength or higher energy light.

When the projector is in operation, it emits visible light and infrared light. As mentioned earlier, these are non-ionizing types of radiation.

The projector also produces ultraviolet rays. However, the glass lens in the projector filters out most of this UV light.

This leaves only the visible and infrared light to be emitted in the beam.

This is why you can see images or videos being projected. Yet, if you place your hands directly in front of the lens, you will feel the warmth from the infrared radiation.

The only threat to a viewer that can be brought about by the reflected beam is from the blue light it emits.

Blue light is a part of the visible light. However, the effect of this blue light is properly mitigated.

Viewers are not subjected to eye strain or discomfort. This is because they don’t make direct eye contact with the projector beam.

The light bounces off the surface of the projector screen hence. This filters the beam and greatly reduces its effects.

1. Does a projector have radiation?

Projectors emit radiation. But this should not be mistaken for the ionizing type of radiation.

Ionizing radiation poses a great danger to the body. It can cause damage to body tissues, which can result in acute health complications.

It possesses slight health risks, but it is far less dangerous than the ionizing radiations.

However, you’re exposed to less harm. This is because you will not be staring directly at the light source but viewing the projections on screen. 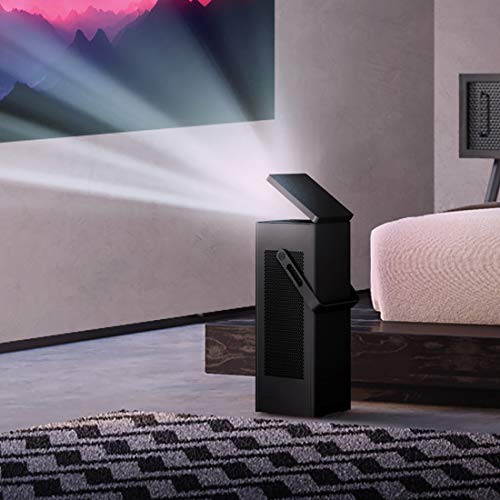 Generally, laser radiation is not harmful. It doesn’t go through the body or cause cancer.

It interacts with the body much like ordinary light. In fact, lasers compared to other light sources are less intense.

Laser radiations should not be mistaken for radio waves, microwaves or the ionizing x-rays which cause great harm.

The danger posed by a ray depends on the ray’s wavelength and its frequency. Rays with shorter wavelengths and higher frequencies are more dangerous.

A ray will be dangerous to people if it can penetrate a person’s living tissue and interact with molecules in it. That is, if it is ionizing.

Projector beams emit visible light and infrared light. Both of these lights belong to the non-ionizing type of radiation.

So to the question, “Do projectors give off radiation?”, the answer is YES. However, their radiations pose little danger.