Answering the question “do I need a UPS for my projector” is an easy one when you think about the purpose it serves. Some remain on the fence about purchasing a UPS because it is an optional component that they think may not be necessary.

Some projector owners would rather spend money on the projector and other electronic devices than incur an additional cost behind a projector – especially if their circumstances do not warrant a projector right away.

Depending on the amount of money invested in technology and equipment, some will forgo buying a UPS. But, if you’ve invested a lot of money in your projector and have been the unfortunate victim of a number of power outages (both personally and professionally), you just may value it more than most.

There’s no denying that purchasing a UPS for your projector is an important decision that requires some consideration and budget. No decision should be made in haste.

For those who are still on the fence about purchasing a UPS for your projector, we offer some advice to help ease the decision process.

What is a UPS?

In a power outage, a projector adapter won’t work without an external battery source. The UPS serves as that power source (battery) in such a circumstance.

Though this article covers the UPS backup for a projector, keep in mind that you can purchase a UPS for all your other electronic and digital devices as well.

What is a UPS for? 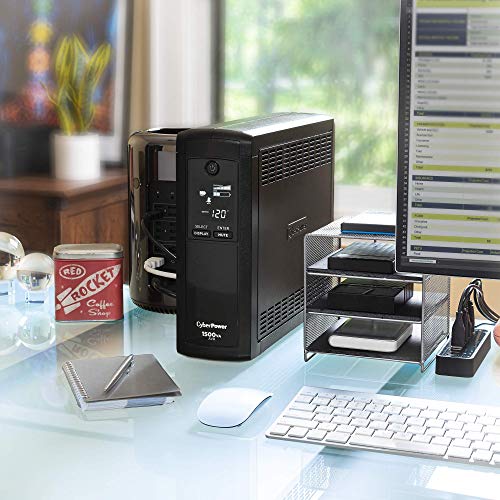 A UPS is designed for providing power to an electronic or digital device such as a projector, should your home or company’s power go out.

Your home runs by way of electricity, which you pay to use every month. Your lights, water, air conditioner, heat, and even TV are powered by electricity. In the event of an outage, these things cease to function on their own. They will need a UPS.

In a power outage, your devices will likely experience something of a loss of power where they could cease to work for a few minutes. The UPS allows these devices to reboot and restart.

Last but not least, you may find that your projector declines in power output as it ages. The uninterruptible power supply (UPS) also counteracts the aging power decline in projectors.

So, in a situation where your projector’s electrical output just doesn’t run like it once did, the UPS compensates for the power decline and supplies the necessary power to keep the projector running smoothly.

How does a UPS protect a projector?

Even non-lamp-based projectors (such as a number of smart projectors) have a heat output when in use. In the absence of a UPS and a random or unexpected shutdown, the projector cuts off without cooling down.

The end result is that the lamp can get too hot. Should the lamp in a lamp-based projector overheat, the device could explode and the lamp could completely die and need replacement.

The UPS allows the lamp to cool down before shutting the device down. This allows you to keep the projector lamp cool and prevents fast decline.

The more you can sustain a projector lamp and maintain it, you can avoid having to buy a new one so soon.

When a device goes off without properly shutting down, the device could overheat and a fatal or harmful explosion could result. This is why all manufacturers encourage users to shut down devices the right way, rather than abruptly unplugging the device from the wall or pressing and holding the power button on a device.

You can think of projectors in the same way as you think of smartphones. When a smartphone is in use, it can turn warm or hot on the back cover where the battery sits. If a device isn’t allowed to cool off and shut down so that it can cool, it can explode. The screen can explode and send glass everywhere.

The potential danger that unexpected outages and shortages can cause projectors is easily apparent in the summertime. As temperatures reach a certain melting point, outages can cause the air conditioner in your home or business to go out.

Take a hot projector lamp in a hot environment (your home without A/C, for instance) and you have a recipe for disaster. So, even without a projector lamp, your projector is still at risk should it stay hot and not have time to cool down and perhaps, shut down.

While many think of the UPS as just a surge protector to protect against voltage surges and dips, it also functions as a backup battery for the projector.

In the event that your projector’s battery source goes out, the UPS keeps your projector running so you can quickly carry on with what you’re doing. With a UPS, an outage doesn’t have to interrupt your presentation, party, workflow, or leisure gathering.

Do I need a UPS for my projector?

If “need” is defined as necessity, then no, you do not need a UPS backup for your projector. Your projector can function whether you buy a UPS for it or not.

The projector comes with its own power supply and, in most cases, that’s enough to operate your projector without trouble. The UPS is not a built-in component to a projector. It’s an optional attachment or component for a projector, but not as necessary to a projector as a projector lamp.

You never know when electricity will let you down. You may live in an area where you experience few electrical outages, but you could find yourself watching something on your home movie projector and witness your screen go blank. It happens in the most normal situations.

You may find yourself in the middle of a business presentation when the power goes out. In such hard moments, you will be thankful for a UPS – and you will certainly find it useful when you need it.

You may feel that you “need” a UPS for your projector, however, if you own an expensive projector that you do not have money to replace.

And in such a case, it is better to keep the projector lamp running than to have to replace it on a small budget. Whether or not you need a UPS backup for your projector is subjective, based on your own personal needs. You may lack the funds at the moment, or, you may just feel it’s an unnecessary expense for now.

If you live in a rural area where summer storms could threaten your tranquillity and pose harm to the device, you may see a UPS as a need rather than a luxury purchase.

In which case should I use a UPS for my projector?

You should use a UPS backup for your projector in a number of circumstances pertaining to natural disasters, adverse weather events, power outages, power surges (especially in hot weather), and in aging devices, among other things.

Other adverse weather events pertain to power surges that can occur in hot seasons such as summertime. As temperatures climb up to 90 degrees and 100 degrees Fahrenheit, outdoor heat can have an effect on power lines and transformers.

Projector lamps are expensive. Owners of lamp-based projectors are encouraged to upgrade their projectors quickly to avoid the expensive cost of replacing the projector lamp. Even with quick upgrades, however, a surge protector for your projector is still a wise investment option.

If you don’t own a lamp-based projector, you may still not be able to just toss out your projector for a new one. In such a case, you would want to do everything you can to avoid spending hundreds of dollars on a new projector.

Projectors can cost thousands of dollars (fancier models, that is). Buying a UPS to keep your projector in optimum shape is the more financially feasible option.

Aging devices struggle to perform at the same rate of electrical output that they did when they were new. An outage could completely drain a projector and force you to either buy a new lamp (if it is lamp-based) or buy a new projector.

In some cases, power outages may not kill your projector but could cause it to malfunction.

Do you need a UPS for your projector? It depends on how you view the role of a UPS and whether or not it fits your budget or long-term investment in a projector.

The UPS is a life-saver, time-saver, and money-saver when it comes to the effects that volt surges, dips, and random outages can have on your projector. Adverse weather and electric storms can further wear down your projector.

Whether a business owner or leisure buyer, you don’t want your projector to die out sooner than it must. If buying a UPS sustains your projector for a few additional years, then it’s worth the cost.

While the UPS backup for your projector sustains and protects the projector, it also protects your money, time, and peace of mind. These benefits make the all-in-one UPS a worthy purchase.