Every item you buy has a lifespan—be it clothes, food, electronics, or automobiles, to name a few. Edibles usually have an expiry date, after which they are either completely non-consumable or pose health concerns post-ingestion.

Items that are not meant to be put into your mouth deteriorate or lose function over a period of time. Electronic accessories like an HDMI cable, for instance, either work or don’t work. There’s usually no middle line in between the two binaries.

However, the cable’s age and condition could lead to inferior performance or call for a cable upgrade in some cases.

If you are dealing with HDMI cable issues in your setup, not sure whether to replace the cord or not, etc., the following pieces of information shall be of tremendous help.

Keep reading before throwing your HDMI cable away or choosing to keep it.

Do HDMI Cables Need to Be Replaced?

Yes, HDMI cables require replacement if they are broken or do not carry out their intended task or if they are a bit too old to handle the high bandwidth requirements of your current, more modern setup.

A bad HDMI cable is not just a kinked or precariously twisted wire. There could be issues at the connector end of the cord too.

For instance, if the connecting metal is rusted, bent, or broken, that calls for a cable replacement.

Though you could repair the connector and set it right again, it’s generally not worth the effort and time required, especially considering how relatively affordable and easy it is to buy a new HDMI cord.

Not to mention, you need a certain level of expertise and a few tools to do the repair work.

As far as corrosion is concerned, a gold-plated connector shall withstand the phenomenon a lot more efficiently than one without the gold coating.

At times, internal, non-visible damage could be an issue.

The hampered cable from within shall look good from the outside, and the connector ends would also not have rusted.

Such issues call for a replacement.

And even if your cable is working just fine or is not riddled with any of the above concerns, there’s always the inner urge to buy a new cable when one releases to keep up with the bandwidth requirements of your new setup.

Do HDMI Cables Ever Wear Out?

Yes, they do wear out, but not as easily or quickly as you might think.

HDMI cables are durable offerings as each copper wire inside the cable is insulated individually. A foil shield goes on top of those wires too.

The bunch of wires within is then covered in a protective sheet of braided shielding. The flexible plaster layer you see on the outside is the external and final layer of protection.

Quite clearly, HDMI cables are built to survive harsh conditions and reckless handling. But they are not “indestructible”.

If not handled well or treated with disregard, the cable shall certainly wear out and do that at an accelerated pace.

When pulled at with extreme force, for instance, the cable’s internal wiring could damage, or it may just break into two pieces.

Severe wear and tear could cause the internal wires to come loose, soldering to wear out, or the header or connector to decouple from the wire.

Usually, the connector head fails because it’s at the receiving end of most of the routine grind.

For the above scenarios to occur, it would warrant some truly irresponsible cable handling.

How Long Do HDMI Cables Last?

If dealt with responsibly and with care, HDMI cables should last you years. But if subjected to rough use—for instance, being thrown on the floor and stomped upon—they’ll not come good for very long.

If a user doesn’t unplug and plug their cables frequently and neatly tucks them away behind a TV or through a wall semi-permanently, the HDMI connector and, therefore, the cord shall have a longer lifespan.

Most users do not stress-test their cords on purpose or for some science experiment. That general tendency or good user behavior coupled with the robust builds of these cables result in HDMI cables usually lasting several years.

It’s hard to put a specific number down. But it’s safe to say that an HDMI cable would last anywhere between 5 years to a decade at least.

Some people claim to have used their HDMI cables for more than a decade or two and still use those same cords.

These folks generally do not plug in the cable, yank it out every other day, and do not upgrade to cutting-edge devices that support the latest HDMI standards.

How Do I Know If I Need a New HDMI Cable?

If the cable looks soiled or worn out from the outside, get a new cable because you never know when the cable will give up on you in its poor physical state.

An HDMI cable calling it quits in the middle of your streaming or gaming session can be pretty frustrating.

A mint-looking cord is likely to be a cable in good stead, but it is no assurance. The damage could be purely internal with no indications on the outside.

If you continue using the cable, it will stop working entirely after some time, and that abrupt stoppage might even hurt your connected devices.

And then there are these visual signs that your HDMI cable is faulty and likely needs to be replaced:

Kindly note the above issues are not always the sign of a bad cable. Determine the root cause(s) before blaming the cord.

How Can I Test My HDMI Cable?

As alluded to above, poor HDMI performance could be the cable’s fault, the port’s misdoing, or the misbehavior of any other link in the chain.

To check your HDMI cable for proper functioning, you may perform basic checks.

If there are frequent disconnection issues or the image quality is subpar, check if the cord is plugged in properly.

If it is and the visuals are still not up to snuff, use another cable to see if things get better. If they do, the cord is likely damaged and must be discarded.

Check the HDMI connector’s port for any rust buildup or damage to its 19 pins. These pins carry a variety of data such as video, audio, etc. Minor harm to them could cause discrepancies.

Again swapping the cord with a functional cable will help you determine issues or rule out any concerns with the connector.

Some issues could also be due to the length of the cable.

The longer the cable, the more challenging it would be for the input source to transmit information to the output device—especially for a passive line.

Heavy or additional pieces of data, such as 4K and HDR, may struggle to get across a lengthy cable.

Most users do not require an HDMI cable longer than 10 feet. The length, therefore, is usually not a concern.

If you run the cable behind a wall or across rooms, look for an active HDMI 2.1 cable.

If it’s an HDMI 2.0 cable, the passive cord can be as long as 25 feet (7.6 meters). When buying a cable, make sure it’s not breaching the length limit for its specific HDMI standard.

Is There a Difference Between Old and New HDMI Cables?

A new cable bought a few years ago does not differ in specifications and features as much as electronic devices, such as smartphones with a few years between them, do.

That’s because new smartphones with a faster chip and upgraded specifications/features come out every year. On the other hand, a new HDMI standard takes years to refresh. HDMI cables, therefore, are not upgraded once in 12 months.

HDMI was first released in 2002. During the two decades it has been relevant, the standard has been upgraded to a newer version only five times.

And then there’s the “backward-compatibility” convenience with HDMI cords, similar to DisplayPort and other audio-video cables. An HDMI 2.0 port, for instance, works just fine with a 1.4 standard line.

However, cable standards and technologies change over time, or backward compatibility doesn’t always mean no difference in user experience.

HDMI 2.1 is a Different Breed Altogether 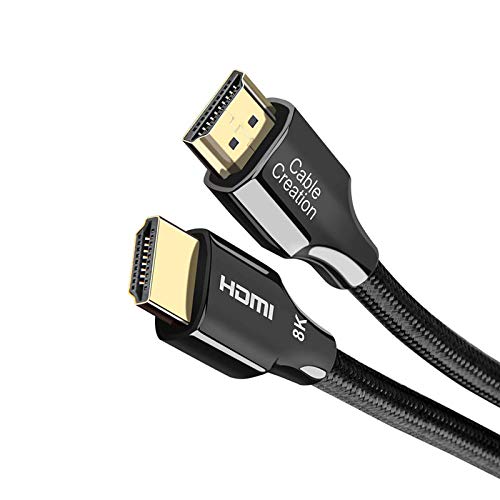 HDMI 2.1 is a giant leap compared to other HDMI versions, boosting your HDMI connection’s bandwidth capabilities significantly. The increased bandwidth of 48 Gbps facilitates blazing speeds that the previous standards cannot cope with.

Therefore, if you’re looking to buy a new HDMI cable because your existing cords have grown old, it’s recommended you buy the more futuristic 2.1 cables.

Below are some excellent HDMI 2.1 cables for your purchase consideration:

Even if your existing setup doesn’t require HDMI 2.1 cables, opt for the 2.1 cord since they aren’t priced significantly greater than the previous-gen cables.

Although HDMI cables are designed and made to last several years, and even indefinitely in some cases, there’s no lifespan guarantee to them as such.

Some cables may fail to work after a few weeks or days of use. And then some cables arrive dead in the box.

If the product is backed up by a manufacturer warranty, it’s easy and cost-efficient to replace them. But if it’s a cheap cable bought from a no-name brand with zero buyer protection, then consider the money wasted.

To conclude, keep your HDMI cables if they work. A new cable purchase makes sense only if your existing cable has gone bad or fails to keep up with your latest gear’s more advanced bandwidth requirements.