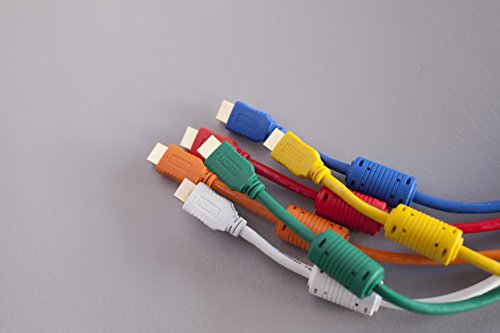 How many times in the past few months have you used your HDMI cable? Have you ever wondered what that cylindrical shape near its end is?

That cylindrical shape is called a ferrite core and is meant to support it. But do ferrite cores help HDMI cables or is that a misconception?

Ferrite cores are helpful but not as much as one might think they do. To understand their purpose and contribution, we need to explore their components and their key features, and this will help us discover how they enhance HDMI cables.

Before we explore how effective the ferrite core can be in improving the performance of HDMI cables, let’s understand what ferrite cores are.

What are Ferrite Cores?

Hence, ferrite cores have become more common, but several HDMI cables in the market are available without them, and consumers continue to purchase these versions.

The answer to this question can be both yes and no, mostly because we get the incorrect idea about the role ferrite cores play in the HDMI cable design.

Ferrite cores, as mentioned above, are typically used to coat wires, cables, or devices carrying high-frequency electric energy because they help prevent energy loss. However, that is not the purpose they serve for HDMI cables.

In this case, ferrite cores are helpful if you live in an environment with high levels of radio frequencies or noise. The insulating properties of the cores help keep the noise from interfering with the signals the cables are carrying, helping you get a more stable audio and video experience.

Which Environments are Considered Noisy?

Noisy environments or those with high radio frequencies are near radio or power stations because their power lines and devices often have charged particles undergoing acceleration.

While the frequency is not high enough to be dangerous for humans, it can interfere with other areas’ electromagnetic signals.

What can Ferrite Cores Be Used for?

Ferrite cores are a common element in the electronics industry, where they are used frequently for their insulating properties. The following are some of the most common products they enhance:

Broadband transformers are spiral-like wound magnetic devices used in telecommunication devices to transfer energy. They transfer this energy over a wide frequency range and need the support of an insulation material to prevent the energy from leaking out.

Therefore, engineers use ferrite cores when designing broadband transformers to provide them with the necessary support and protect them against external elements.

EMI filters are commonly used in electronic appliances and devices to suppress electromagnetic interference of signals. Since ferrite cores also serve the same function, they are used to enhance EMI suppression filters’ design and increase their effectiveness.

Several charging cables for laptops and similar electronic devices have the cylindrical ferrite core. The main purpose of power cables is to supply electricity to the electronic device, and they are typically coated with insulating materials to prevent energy loss.

However, adding a ferrite core or bead further improves this insulation and improves the charging efficiency of the product.

Is there a Chance a Ferrite Core Won’t Work?

The only reason a ferrite core won’t work is if it is damaged or used for the wrong device. As mentioned, their core purpose is to prevent energy loss and interference. So, as long as the core is not damaged and you are not using it incorrectly, it should work.

You can use a ferrite core incorrectly if the bead you are using is made for a lower current threshold than the one passing through it. The higher threshold current can damage the component easily.

Since currents are affected by temperature, you need to consider potential temperature changes when selecting the core. If the core threshold and the actual current difference become too high, the ferrite core’s inductance will drop sharply.

How Else Can We Reduce Radio Frequency Interference?

There are several things you can do to minimize interference when using HDMI cables.

The better the quality of your HDMI cable, the more durable it will be and the less likely it is for you to face interference in radio signals. However, the best quality cables can be relatively expensive; hence, you will need to research and specify a budget before deciding which cable to buy.

You can also check out the more renowned brands and select one of their offerings to ensure you make the right choice.

Getting a ferrite core enhanced cable is also guaranteed to help you reduce interference as long as the core isn’t damaged and suited to the current.

The longer the cable is, the lower its effectiveness and the higher the interference. Try to limit the HDMI cable length to 4 or 4.5 meters if you want the best results. If you get anything longer than this, the protections around it will not prevent interference as effectively.

Where Can I Buy HDMI Cables from?

Most electronic stores and major supermarkets like Walmart offer a range of HDMI cables to select from. If you can’t physically go to the store and buy it, you can also consider the wide range available on e-commerce stores like Amazon or Best Buy.

However, make sure you finalize your range and specifications before you start looking, so you don’t end up overspending on a product you don’t need.

Ferrite clamps are used to enhance the effectiveness of the core further. They come in several sizes and cover the core from the outside, providing it an extra layer of protection and support.

Yes. HDMI cables can receive interference from high radio frequencies. While this occurrence is not present everywhere, locations near power stations or radio stations face this problem more frequently.

If you love gaming and live in such an area, it is best to find a way to reduce interference.

Yes, there are several ways of preventing RF interference without using a ferrite core.

If you live in a high RF environment, you can reduce RF interference during gaming by enclosing the equipment in a metal box. Metals or metal alloys like copper and steel absorb the RF, preventing them from disturbing signals.

You might be worried about the high electromagnetic frequencies and RF disturbing more than just your entertainment electronics. In this case, you can also use shielding paint for your house to keep the interference out.

These paints are supplemented with metals to help them absorb or block EMF and RF in the environment.

Based on a similar principle as the shielding paint, RF shielding windows refer to an adhesive film that you can use on your windows to block unwanted EMF and RF. You can also use these on your computer screens, microwaves, etc., to protect yourself against the radio frequencies these electronics generate.

Yes. As mentioned above, several home electronics are notorious for generating radio frequencies, and they are part of our daily routines. Microwaves, laptops, mobile phones, and cordless phones are only some of the electronics on this list.

Low-level radio frequencies and electromagnetic frequencies, which our phones and similar electronics generate, are harmless; hence there is no need to be concerned about their impact on your health.

In a nutshell, ferrite cores help HDMI cables by insulating them against the radio frequency noise in the environment. They are primarily used in electronics designs and EMF filters to lock in the electrical current and prevent energy loss.

However, since HDMI cables use digital signaling, this function does not apply to them. We hope you found this blog informative and encourage you to check out our other blogs for more information about HDMI.