Nice silver-colored hilt and bright red blades. The blades are smaller than the hilt, which ruins the toy’s aesthetics and makes it hard to play for small kids.

Durable and lasting; can be played in actual battles between kids.

An affordable and durable toy that is a little too long and big but still greatly enjoyable.

Darth Maul is a character from the Star Wars universe who pretty much sparked up the interest of fans worldwide. A little disappointed by the first prequel movie The Phantom Menace, fans felt that Maul redeemed the franchise and brought excitement and intrigue back to it.

The one thing that characterizes Maul is his blazing double-bladed red lightsaber. The battle scenes featuring this lightsaber are intense, flashy, and full of acrobatic stints.

The Star Wars Darth Maul Double-Bladed Lightsaber toy first came out in 1999 to coincide with the release of The Phantom Menace. Since then, it has gone through some upgrades in styling. This version is the second one to come out and is longer, sleeker, and thinner than the first one.

Who Is the Product For?

This product is wonderful for all fans who feel enthralled by the flashy, attention-grabbing movements of Darth Maul. Those who wish to re-enact his movie scenes will get a kick out of buying this toy or receiving it as a gift.

Adults and kids alike will love adding this toy to their growing collection of Star Wars merchandise. Since the toy is affordable, it is not difficult to obtain. Also, its durable quality allows it to take part in actual combat between kids.

That being said, this toy is not the best option for smaller kids. This is because of its bulky size and weight.

The Darth Maul Double-Bladed Lightsaber toy weights 14.6 ounces and stretches out to 5 feet in length. This makes wielding it a problem for little kids. Hitting household items and hurting other kids might become an issue.

The Star Wars Darth Maul Double-Bladed Lightsaber toy comes in a fashionable box. It is long and sleek just like the saber is, with added decorations and quotes along the sides.

Opening the box, you will find the lightsaber toy. It features an attractive silver hilt with decorative buttons and two retractable blades that come out with the press of a button and a flick of the wrist.

Kids and adults alike will love the features of the Star Wars Darth Maul Double-Bladed Lightsaber toy. To understand this toy better, let’s look at it from top to bottom.

The toy lightsaber’s hilt is made out of shiny silver material. It has a metallic glow to it that makes it look realistic. Along the hilt are a number of decorative buttons that don’t work, but further aid the toy in looking like the original one seen in the movie.

In the middle of the hilt are two silver buttons that do work. Pressing them releases a catch that allows the two red retractable blades to come out from either side of the hilt.

Another issue with the toy is that the retractable blades are a little stiff. Pushing them back into the hilt can be difficult, especially for younger kids. Also, the blades are very long and hard and can damage household property or hurt other kids.

That being said, this toy is excellent to add to a collection of toy lightsabers. Older kids who can manage the toy’s weight and length will no doubt enjoy it in duels against members of the Light Side of the Force.

After unboxing the Star Wars Darth Maul Double-Bladed Lightsaber toy, you are ready to play with it right away!

Grab hold of the hilt and position your fingers at the two silver buttons in the middle. As you push the buttons, swing the hilt in an arching motion and watch the blades pop out!

For variation, you can press only one of the silver buttons instead of both of them. This will allow only one blade to come out of the hilt. This feature is great because it allows you to wield either a single or double-bladed lightsaber, depending on your mood and the kind of fight you are going into.

An alternative for Star Wars fans who want lights and sound with their double-bladed lightsaber can go for the Star Wars Laser Sword. This excellent toy lightsaber can change color 7 times. It also has realistic battle sounds for kids who want to get into duels with friends. Because of the connector added to the set, two lightsabers can be joined to form a double-bladed weapon. 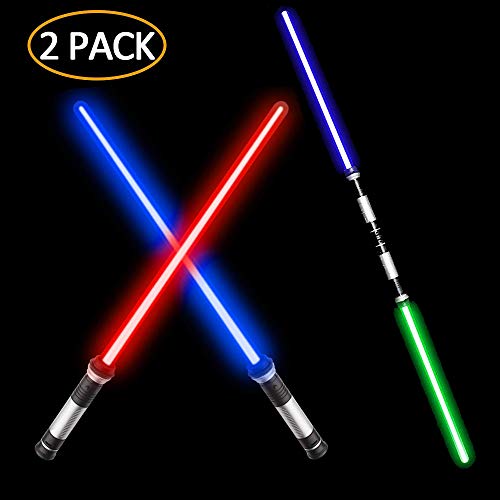 Although this toy is not particularly Darth Maul’s specialized lightsaber, it fills the need for a double-bladed lightsaber with lights and sounds.

The Darth Maul Double-Bladed Lightsaber toy is a wonderful addition to every avid Star Wars fan’s collection. It is also a super durable toy that kids can use in imagined galactic battles. While it is too long and heavy for younger kids, it is perfect for everyone over the age of 4.

Lightsaber Scythe: Would it be a practical weapon in Star Wars?

Phrik: All you need to know about Phrik Alloy

What Happened To Darth Vader’s Lightsaber?