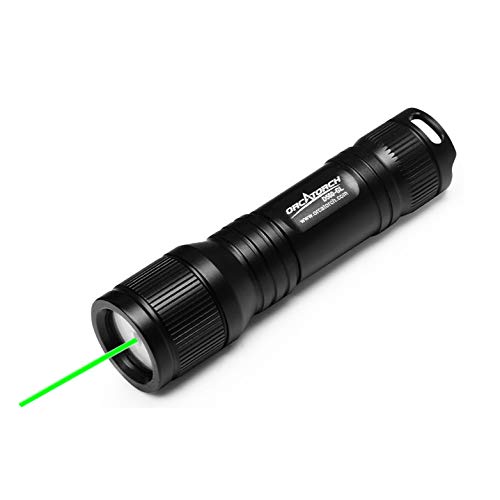 A 5mW green laser pointer beam should be visible if viewed at night; however, it might not be that bright. Several factors ultimately impact the visibility of the laser beam, such as the viewing angle, environment (particles suspended in the air), weather, and more.

Let’s take a closer look at the question to get a better understanding.

Can You See the Beam of a 5mW Green Laser Pointer?

As mentioned above, you can see the beam at the right angle and under the right circumstances. These include:

Hence, in your room, you may not be able to see the beam as clearly as you’d like during the day. However, you can make it out fairly easily during the night. A 5mW laser isn’t as strong as you’d think in this regard.

For astronomy and commercial lighting purposes, lasers range from 6mW to even 1,000mW. The latter can burn a hole in aluminum sheets if exposed for long enough and, therefore, isn’t used commercially. Typically, lighting shows use a blend of laser pointers ranging from 5mW (red) to 20mW for the beam.

Trying to See the Laser Pointer Beam at Night

Considering the 4.5 to 5mW limit, there are ways you can see the beam of light as well. When testing the theories mentioned below, we used a laser pointer labeled at 4.92mW.

Even with the lights on at night, you will be able to make out a green beam of light when you turn the laser light on. However, if you point it outwards, you will find that the light will come to a stop abruptly instead of fading into the distance. There won’t be a point that identifies where the laser is hitting, so you will need to look at the light at an angle to see this.

This is exactly what happens during a light show – you can see that the ones going up into the sky just stop at one point. It is a common misconception that the laser stops when the light hits the clouds; in some instances, this is true. However, what if the skies are clear? You will see the same effect there as well.

Of course, a 5mW laser pointer won’t be strong enough to reach the clouds or be seen from that far. At a luminosity of 5.0 or 5.5 lumens, you will be able to see the green beam and its end pretty clearly. For this, you will need a night WITHOUT a moon. A cloudy night will also work great to see the pointer’s end.

To give you a reference, in the Earth’s atmosphere, under normal circumstances, a 5mW green laser pointer can go over 2,000 meters. The clouds are usually 3,000 meters (10,000 feet) high.

Within the city, your 5mW green laser will create a visible beam with the street lights turned off and a brightness of no more than 4.0. However, it won’t be as bright as what you may be looking for, i.e., you won’t be able to create impressive light shows with it.

Just 45 minutes after sunset, with a bit of light from the sun still in the sky (roughly 50 minutes of astronomical twilight), the luminosity would be roughly 5 to 5.5 lumens. The beam will be dim at this point but unmistakably visible.

About 45 minutes after sunrise with a luminosity magnitude at 75 lumens (low intensity), you won’t be able to see the beam anymore. Yes, the point of impact (pointer) will be visible but not the beam itself.

At 1,250 lumens (one hour before noon or till the evening starts to set in), the dot will be visible only if you know where to look, which is quite impressive. The luminosity of a 5mW laser is just 200 lumens. At noon, however, under clear skies with a luminosity of 2,500 or above, you won’t even be able to see the dot anymore.

Green lasers can be found almost anywhere, but finding a 5mW laser might get a bit difficult in the (near) future. This is because companies, starting with Amazon, are now looking to limit selling dangerous equipment to the public. Lasers, especially 5mW and above, can lead to permanent damage to one’s eye, including animals.