HDR (high dynamic range) is undoubtedly the current “renaissance” movement in imaging (video and photos). But some people have their doubts, and quite understandably so.

HDR is not a monolith. Its correct implementation is dependent on different variables (internal and external to the standard). And the current market players are not necessarily doing an impeccable job.

HDR output quality could be between excellent and sub-par based on the display and recording equipment. The lack of standardization, as a result, has caused a lot of people to become HDR skeptics, which begs the following questions:

Let’s answer these questions and discuss other pertinent details.

Can Projectors Do HDR?

Before answering that question, let’s do a refresher on HDR to benefit those not particularly familiar with the concept.

HDR is a photography and videography technique that helps capture high dynamic visuals. It does that by merging multiple images of a subject with different exposures.

HDR or High Dynamic Range as Fast As Possible

HDR balances the lighter and darker areas of a shot, keeps shadow details, and ensures the colors showcase their broad spectrum.

As a result, an HDR visual is close to reality or what the naked human eye sees in real life.

HDR standards were devised for TV sets, monitors, and other display-bearing devices. Projectors were not part of the picture (no pun intended).

That segues us to answering the question.

Projectors can do HDR. But it depends on the projector type, its built-in HDR tech, and other aspects.

Only a handful of HDR-friendly TVs can do true HDR or showcase what the maker intended. The same holds good for projectors too.

Generally, HDR performance on projectors is inferior compared to an HDR TV. For starters, your average home projector may not get as bright as a comparable 4K TV.

And then there are just too many externalities with a projection that could render achieving proper HDR visuals difficult.

The projection screen may not be up to snuff for HDR.

A light-colored wall or screen, for instance, would struggle to achieve the high contrast ratio mandatory for HDR.

Also, if the speakers go behind the screen, the perforations that let the audio out could pose light loss or reflectivity concerns.

ALR (ambient light rejecting) screens are generally considered excellent for projection. But they may not be ideal for HDR.

Although ALR screens help with contrast performance, there are also adverse artifacts, like sparkle, hot spots, and texture. Those could decrease the resolution and negatively impact detail perception.

And since users can increase and decrease the projection size at a whim, manufacturers must incorporate a few additional processes into their projectors.

The larger the screen gets, the greater the need for high peak brightness. And higher brightness means improved black levels.

The distance between the projector and the projection screen can also impact the visual output.

And then there’s the ambient environment that you must be fully on top of.

Ambient lighting could significantly impact display contrast and wash out the picture when viewing darker visuals.

Do not expect to witness authentic HDR visuals outdoors or with the windows open during the day.

Light-colored walls and ceiling will reflect projector light onto the screen. A mix of medium to dark greys and black surfaces will help your projector churn out optimal HDR performance, providing you with the ideal experience.

The following are some other aspects projectors find HDR tricky to manage.

Tone mapping is an image processing technique (also used in computer graphics) for mapping a particular set of hues to another color set or altering digital signals to correct light levels.

In simpler words, the technique reduces or adapts an image’s tonal values to ensure they are suitable for viewing on a digital display.

Projectors come with tone-mapping capabilities built-in. But those are static. Static tone maps stuff HDR signals into one fixed video range, which can be challenging to predict.

Luckily, dynamic tone mapping comes to the rescue or helps with HDR on projectors. But there aren’t many devices capable of such dynamism. Currently, only JVC does it, and maybe a few other brands do it.

The JVC DLA-NX9  is one such projector capable of dynamic mapping. The LG HU85LA , an ultra-short throw device, also has frame-by-frame tone mapping, which helps display HDR10 content. 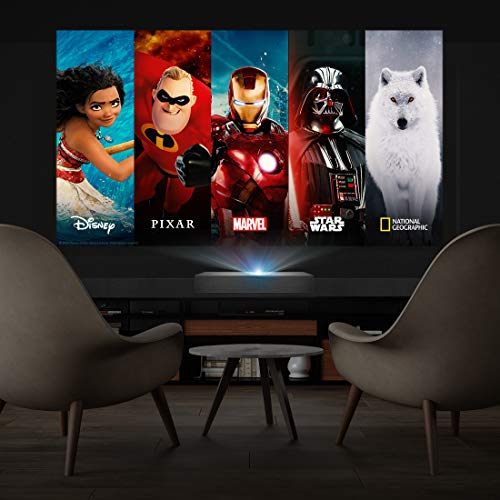 With that said, the mapping technology may not work the same way on all projection devices.

And some projectors (not the ones mentioned above) may need an external processor such as Lumagen Radiance Pro or a madVR Envy to adapt to the wide HDR content range and deliver optimal performance.

The Radiance Pro, for instance, can fully process HLG and HDR10 video formats at up to 4K in 2D and 3D. The average built-in projector processor may not be capable of that.

The 4K upscaling, detail enhancement, and specialized sharpening that the madVR Envy delivers also may not be within the scope of an integrated projector processor.

But then, these discrete processors aren’t perfect and can pose issues too.

When tone-mapping is done incorrectly, the image could lose color saturation, highlights, etc.

However, the biggest roadblock is the prices of these outboard processors. The Lumagen Radiance Pro, for instance, would set you back $6,000 at least. madVR Envy Pro costs even more.

Local dimming is a video technique that enhances a display’s black levels, making the dark portions of a scene extra dark. It, as a result, is critical to HDR performance on screens that aren’t OLED.

A projector’s light source – be it a lamp or laser – illuminates the image chip within its entirety. Dimming the light would cause the entire image’s light to go dim. Dynamic iris-based projectors, too, are incapable of local dimming.

Even the best projectors with relatively excellent contrast ratios fall short of what local dimming LCD and OLED panels can do.

Many users calibrate their TV and external monitor screens to extract optimal performance. Such calibration, however, is tricky or borderline impossible with projectors.

Projectors incorporate a specific tone map that you can’t manipulate. The device comes with presets, which are different compression levels, and you are limited to those choices.

And since the tone-mapping range could differ across projectors, calibration becomes challenging. If projectors allowed users to disable preset tones altogether, attuning the device for proper HDR projection would become more manageable.

Turning off the tone mapping, modifying the projector to a particular color range standard (such as BT.2020), and entering that information into the tone-mapping engine of the projector would be ideal.

They say beauty lies in the eyes of the beholder. Similarly, HDR is subject to perception and personal tastes.

HDR has a set of hardware requirements. Since many projectors do not meet those requisites uniformly, HDR would likely look different across projectors.

And even if a projector does a good job, it may not be appreciated equally by all.

The projector HDR performance that looks good to you may appear so jarring to another person they would want to turn off the feature itself.

Not to mention, a lot of the HDR content may not have been shot in proper HDR mode and could be remastered versions of older SDR releases.

However, in quite a few other cases, some projectors do a shoddy job projecting HDR content, making their SDR counterparts look better.

For actual HDR performance, a given projector should be capable of at least 10,000 nits of peak brightness. Most TVs don’t get that bright, but they still get marketed as HDR-friendly.

Similar is the tale with projectors and their HDR prowess. In fact, it’s worse.

If you’re looking to buy a 4K projector with HDR capabilities, learn more about the device and the various HDR parameters it meets or doesn’t meet before laying down the cash.

Indeed, don’t go by what the manufacturer claims.

Due to the lack of regulation, several device makers use the term HDR loosely in their marketing texts despite not meeting the necessary hardware requirements that lend to proper HDR performance.

The likelihood of such deceptive marketing is more with projectors since it’s behind televisions in HDR adoption, implementation, and other aspects relevant to the discussion.