Laser pointers are good for a lot of things, including assisting in presentations and conferences and playing with little furry pets.

If you own a laser pointer or any devices that use laser technology, there’s probably been a point where you’ve asked yourself:

Can a laser pointer reach the moon?

Well, the answer to that question isn’t as simple as a yes and a no.

A number of variables come into play that influence a laser’s power and ability to reach the moon.

Below, we discuss these variables in detail to help you get a better picture of the situation.

How far can a laser pointer go? 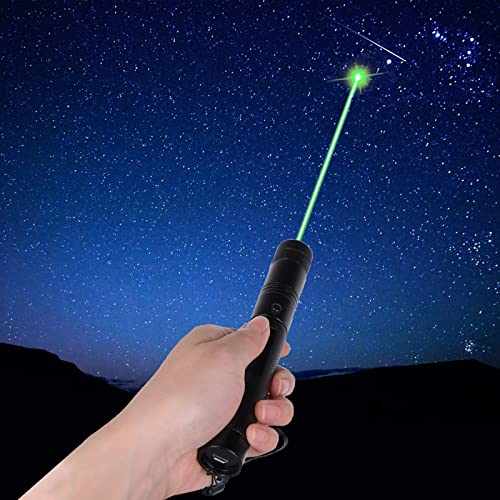 It’s tough to come up with a specific number to answer this question. Theoretically speaking, lasers can go on and on, until it reaches the very edge of the universe. All we know is that the stronger the laser, the farther the distance it can achieve.

Laser pointers are increasingly available in the markets for consumers. And depending on where you’re from, this equipment has very specific legal limits to ensure the safety and security of its users.

In the US, legal laser pointers have a max power output of 5mW. Otherwise, they can’t be sold on the market.

Although 5mW lasers are considered to be Class 3R lasers (the “intermediate-level” lasers”), their beams can reach airplanes flying heights of 40,000 to 60,000 feet.

Don’t go and try this out for yourself! Shining a laser at an airplane or other aircraft can land you a civil penalty of up to $11,000.

Can a laser pointer reach the moon?

Theoretically, a laser beam can reach the surface of the moon, but the light would be too dispersed for any of us to see it.

Even the strongest laser on earth — known as the Confinement Beam, which releases a whopping 500 TW (terawatts) of power — doesn’t emit a laser strong enough to be seen on the moon.

FUN FACT: Because the Confinement Beam is so powerful, researchers only fire it for a nanosecond for each use to avoid using up too much energy and resources on earth.

How much power would a laser pointer need to reach the moon?

According to experiments, you’d need around 0.004 YW (yottawatts) to power a laser that’s strong enough to reach the surface of the moon. That’s more than the available energy we have here on earth.

To give you a clearer image of what that would look like:

To reach 0.004 YW, you’d have to give 8 million people their very own Confinement Chamber and simultaneously aim it at the moon.

Shining The World's Most Powerful Laser At The Moon!

Can you see the laser from the moon?

You definitely wouldn’t be able to see a normal laser pointer if you were standing on the moon. The light would be too dispersed for your naked eyes to see anything. However, if you were to base it off the example we gave earlier — using 0.004 YW instead of the meager 5mW —  that’s an entirely different story.

A laser with this amount of power can very well burn your eyes out of their sockets. It can also very easily ignite the earth’s atmosphere, causing the whole planet to burn up.

How long would it take for a laser to reach the moon?

Flags and footprints weren’t the only things astronauts left on the moon — they left a mirror there, too! Researchers at NASA have been using this to measure the distance between the earth and the moon for decades. They do this by shooting a laser beam (the Confinement Beam) onto the mirror’s surface and measuring the time it takes for the light to reflect on earth.

The current average time is around 2.5 seconds.

1. Is it illegal to shine a laser pointer at the moon?

Shining a laser pointer at the moon for curiosity’s sake is completely fine, so long as you don’t end up harming anyone. However, it’s much wiser to avoid shining a laser to the sky at all. Remember, you’re going to have to pay a huge fee if you end up interfering with passenger aircraft.

Keep laser pointers in the presentation and conference rooms.

2. How fast can laser beams travel?

Faster than the speed of light.

Studies from 2002 discovered that lasers traveling through a vacuum were 300 times faster than the speed of light.

The study was conducted by scientists from the NEC Corporation’s basic research unit in the US. Researchers measured the time it took a laser pulse to pass through a 6cm-long chamber containing cesium gas.

Typically, it would take 0.2 nanoseconds for the light to pass through a vacuum. In this specifically designed chamber, however, the light emerged 62 nanoseconds earlier than normal.

3. How come lasers can travel so far?

Laser light can travel much farther than any other light source. And if you’ve ever asked yourself ‘why,’ here’s your answer:

Light travels in waves. And in between each wave is a valley that separates one wave from the other, called the wavelength. Each color of light travels at a different wavelength. Because of this, normal light, like the one you see from a flashlight, can’t travel too far.

In the case of a laser, however, it’s different.

Lasers don’t occur naturally, meaning they are artificially created using a special type of light. This produces a more uniform and controlled stream of light.

Laser light waves all travel together, with their peaks and valleys perfectly lined up. This makes laser beams appear narrow, bright, and focused. It’s this focus that allows laser lights to travel far because the light doesn’t disperse like it would with normal light.

4. Do green lasers have more reach than red lasers?

Lasers are available in a variety of colors, including green. Green lasers are ten to 50 times stronger and brighter than red lase

Considering that the human eyes are much more sensitive to green light, green lasers are a great choice if you plan to use them during daylight. Besides being brighter and stronger than most red lasers, green lasers also offer higher accuracy ratings, which is why they are the go-to hunting tools.

Green lasers also travel much farther compared to red lasers. This is why they are very popular on construction site

In terms of cost, green lasers are more expensive than red lasers. So, if you’re not using the laser pointer for anything technical, there’s no need to buy a green laser.

5. Can laser pointers go on forever?

Laser beams can, theoretically, go on forever — unless it hits something along the way. Since lasers can produce a light that can be tightly focused, it doesn’t experience any divergence, as normal light would. This allows the laser to travel long distances without spreading.

As Newton’s law of motion states, “an object in motion will continue to be in motion until acted upon by an outside force.”

If you were to shoot a laser beam into space, this beam would travel on forever until it hits something.

6. What could stop a laser in its tracks?

Now that we’ve established that lasers can travel to infinite lengths until it’s stopped, let’s talk about what can stop it.

Your reflex answer would probably be along the lines of “a wall” or “a solid surface.” The truth is, absolutely anything of matter can stop a laser beam from traveling forever.

A few stronger lasers may be able to shine through water and gas molecules. But after a while, these lasers will eventually die out.

This is why when someone asks if a laser beam can go on and on forever, the answer is always theoretical.

So, can a laser pointer reach the moon? Only if it’s able to output 0.004 YW (yottawatts) of energy and if it doesn’t manage to blow up the earth before it reaches the surface of the moon.

Laser pointers may seem harmless and small, but they do hold a ton of power that can cause irreparable damage if not handled well. That being said, it’s important that you go back to the rules of safe laser pointer usage to avoid getting yourself and other people hurt.

Yes, your tiny pocket laser might not be able to blow up the entire planet, but it can surely cause vision impairment and injury.