Allows creativity. Can be connected to other pieces in the Blade Builders collection.

Affordable pricing. Cheaper than many Star Wars toys and merchandise.

Plastic is a little flimsy, but gives good value for its price.

An affordable, fun and interesting toy that encourages children to explore their creative side.

Star Wars fans have certainly seen their share of toys and merchandise since the first movie hit the big screen. There have been action figures, lightsabers of all colors and styles, and creativity-inspiring construction kits.

The Battle Spin Light Dagger gives kids and adults alike a combination of full-action dueling toy and creativity-inspiring collectible. Released by Bladebuilders as part of a series of collection items, this toy stands out with its unique design and concept.

Who is the Product For?

The Battle Spin Light Dagger is for anyone who likes to get creative with Star Wars toys. Those who don’t only like playing, but also exploring and experimenting, will feel this particular toy call out to them.

The Battle Spin Light Dagger is an interesting piece. Made out of a hilt and two connectors, it allows the two lighted daggers it includes to be connected at both ends. Kids who want to add a twist to their lightsaber duels will love injecting this toy into their games.

Also, this toy is great for those on a budget. As a Christmas or birthday present, it retails at a much cheaper price than many lightsaber collectibles and toys out there.

That being said, this toy is not recommended for those who are fans of most lightsabers’ humming, buzzing, clashing battle sounds. This light dagger collection is mute, without the intense sound effects many have come to love.

Also, serious collectors will not feel impressed with the aesthetics of this set. Its flimsy hilt and toy-like appearance may turn off those who are into gathering beautifully-made replicas for their collections.

Unboxing the Battle Spin Light Dagger is an interesting process. The toy comes in an attractive box with art and instructions across its surface.

Inside the box, you will find the hilt, which is slender and easy to hold. Around the hilt curves a full circle where the daggers can be connected.

Also in the box are two light dagger blades. One blade is red and the other one is blue.

A set of instructions on how to set the toy up is also included. The toy requires 6 AAA batteries , which have to be bought separately.

There is much to say about the Battle Spin Light Dagger toy collection. To get a closer look at it, it is a good idea to go over its every separate part.

First of all, the hilt of the light dagger toy is slim and fits nicely into small hands. In the middle of the hilt is a button that is pressed to spin the blades of the dagger around.

The two light dagger blades are each around 6 inches long. They are fun to play with in the dark, lighting up with glowing red and electric blue lights. Since the blades are shorter than most lightsabers, they don’t lose their color and brightness towards the tip.

The best part of this toy is the possibility of creativity it opens up. The light daggers that come in the box are not the only options for connecting to the hilt. Other Bladebuilder lightsabers can also be connected - four or more blades can be connected to the hilt at one time!

Still, it is unfortunate to note that the toy does not come with sounds. The wild imaginativeness of kids would definitely go well with authentic movie battle sound effects.

Also, since the hilt is a little flimsy, it does not carry longer lightsaber blades well.

Upon opening the box, remove the hilt of the Battle Spin Light Dagger and hold it in the proper position.

The two blades, one red and one blue, go at both ends of the hilt. To connect the blades, simply twist and press them down onto the connectors.

To spin the daggers, press the button that is found in the middle of the hilt. Then, flick your wrist to send the daggers spinning! The spin motion is not electronic, so you need to keep the motion going yourself.

For those who are intent on having sound effects in their lightsaber battles, the Star Wars Bladebuilders Spin-Action Lightsaber is an excellent choice. 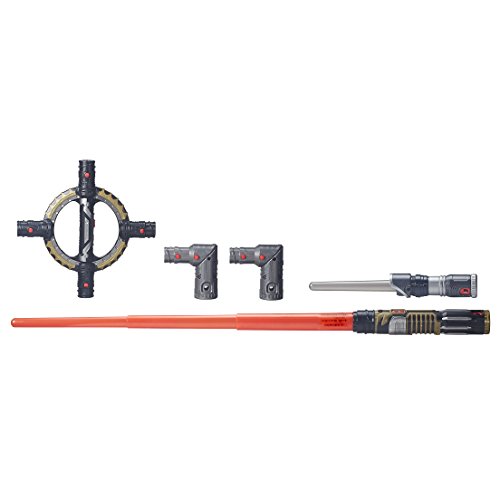 This spin-action toy is similar to the Battle Spin Light Dagger set. However, instead of having only two connector heads, this one has four of them.

The set comes with a lightsaber blade and a dagger blade. It can be connected to other Bladebuilders collectibles as well, and it boasts over 100 possible weapon combinations!

While it is spun manually just like the Battle Spin Light Dagger, it comes with intense lightsaber sounds that make playing with it even cooler.

Those who have started a collection of Star Wars toys and merchandise will love adding the Battle Spin Light Dagger set to it. With its affordable pricing and its scope for imagination, this toy is perfect for those who want to add something new to the imagined battles they love.

Lightsaber Scythe: Would it be a practical weapon in Star Wars?

Phrik: All you need to know about Phrik Alloy

What Happened To Darth Vader’s Lightsaber?