If you own a projector, you’re probably familiar with the loud whirring sound of its cooling fans. It is common with different types of projectors, so don’t worry!

However, new technology comes with marked performance improvements. After all, a new release should be better than previous versions.

The laser projector is ahead of older projection systems that rely on lamp bulbs and LEDs. It runs at low temperatures, doesn’t need much cooling effort, and is quieter than its predecessors.

Are all projectors noisy? Let’s find out. This article will explain the projector cooling systems and teach you how to reduce the noise from your projector.

In comparison to LAMP and LED projectors, laser projectors boast certain advantages that put them at the top of performance charts.

One of those advantages is that laser projectors are much quieter than the other two. The laser projector depends on a light source that generates less heat than LEDs and lamp bulbs.

To prevent overheating in projectors, manufacturers add an internal cooling system. The cooling systems include small fans, which are often noisy.

However, this is not the case for laser projectors. They generate little heat, so their cooling systems are often simpler and quieter than their counterparts.

Do All Projectors Have Loud Fans?

Just like other computer systems or engines, projectors generate heat. Almost every projector faces the risk of overheating, which can damage the projector’s internal components.

A projector creates and displays an image with the help of a light source inside it. This light source can be a lamp bulb, LEDs, or lasers, and sometimes, it’s a combination of two.

During projection, these light sources generate high heat levels — about 100 – 300 degrees. The projection technology doesn’t matter; neither DLP nor LCD projectors are spared.

For very bright projectors, overheating is an even bigger problem. The brighter the light source, the more heat it generates.

Here is where the projector’s cooling fans come in.

Manufacturers designed the internal cooling fans to prevent overheating. The fans blow heat out from inside the projector and allow cool air to get in through the ventilators.

These fans give out a whirring sound from the spinning of their blades and the motors that control them.

While the noise from the cooling fans is common to every projector, it is not supposed to be loud enough to interrupt and distract you from your projection.

Why Is My Projector Noisy?

If your projector’s cooling system is noisy to the point of distraction, there’s something wrong.

Sometimes, external factors increase the noise from a projector’s cooling fans. These factors are small details, but a few can become serious issues if left unchecked.

As we mentioned earlier, brighter images and high-performance projectors generate more heat. The intensity of the cooling fan increases in turn, which causes its blades to whir loudly.

Also, if you run your projector for an extended period without giving it time to cool off, you’ll notice that it becomes noisier. The fans have to work harder (and get louder) to fight the heat buildup. 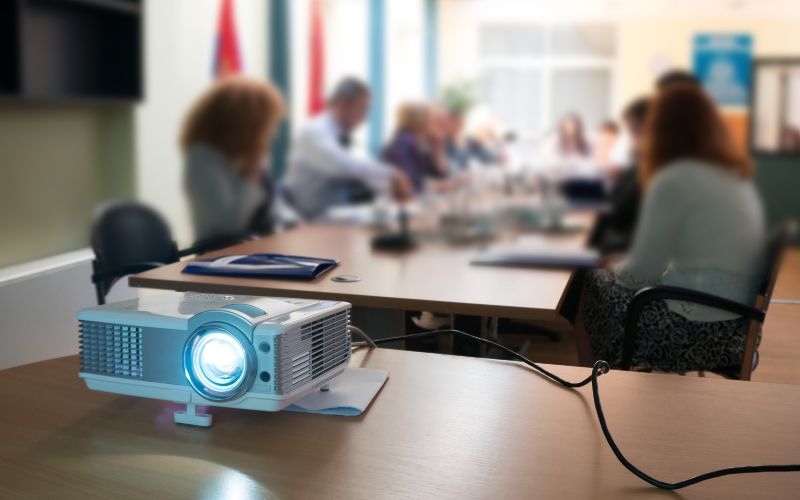 Older projectors are usually louder than new projectors. Due to worn-out parts and components, an older projector has to work harder to perform satisfactorily still.

As a result, the projector heats up faster, making the fan work twice as hard.

Other times, old projectors may be louder because of worn-out and loose components. This is often the case with poorly maintained projectors.

Don’t mount your projectors close to your sitting position. The closer you are to the projector, the louder you can hear the whirring and humming noises from the fan and motors.

Also, don’t mount the projector with its vents covered or facing a wall.

If the vents are blocked, it becomes hard for hot air to get out of the projector. The blockage will cause overheating and make the cooling fan intensify its performance.

Projectors need a well-ventilated room to help them regulate their internal temperature without burdening the cooling fans. 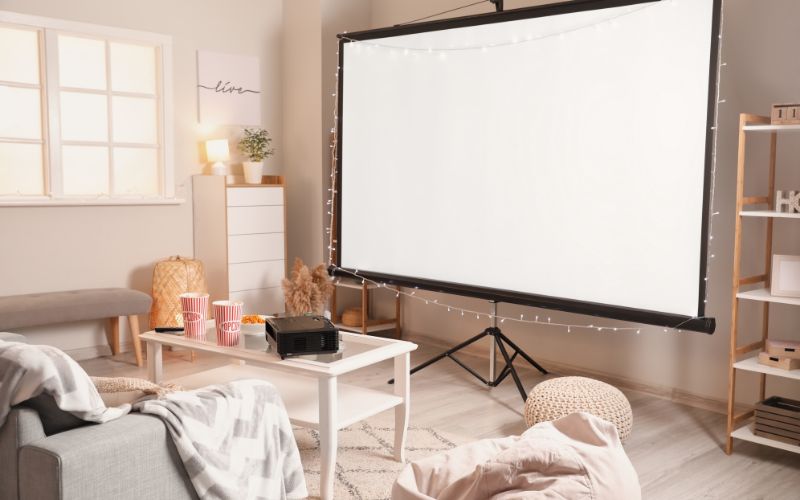 Dust and dirt particles can block the vents of your projector and reduce aeration. They can also coat the internal components, increase heat generation, and cause the fan to work harder.

While we advocate mounting your projector in airy locations, remember to avoid any significant air channels like windows or doors.

These channels often allow the passage of dust and dirt. If your projector is too close to one, dust and dirt may get in through the vents.

Projectors are only noisy because of their fans’ whirring sound while trying to cool down the heat generated by the projection system.

The more the heat generated, the harder the fan has to work, making the whirring and humming sound even louder.

Laser projectors do not generate much heat, so their fans do not have to work as hard. As a result, they are barely audible while in use, and they are certainly not noisy.

How Can I Make My Projector Quieter?

Is the sound from your projector’s cooling system interrupting your entertainment?

This section contains solutions to the possible causes of your projector’s noisiness. Keep reading!

We’ll start by telling you to buy quiet projectors.

If you don’t have a projector yet or want to replace an old one, be intentional about your purchase. Check the projector’s maximum noise level right there at the store.

It is often indicated in the specifications, telling you the most noise to expect from the mechanical components of the projector.

The projector noise level is in decibels (dB). To get a quiet projector, we advise you to buy one under the 35 dB mark — also, look out for laser projectors! 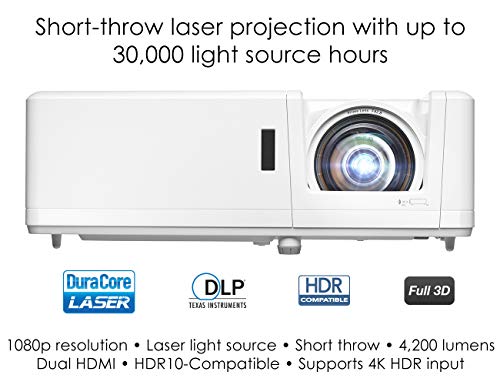 Clean the insides of your projector once in a while. Taking out the dirt and dust increases air circulation and reduces overheating.

And if your projector is old, you consider changing its cooling fans. The old fans may no longer perform optimally.

Mount your projector away from walls or other obstacles that can block the vents and restrict airflow through the projector.

We advise that you place your projector on a flat surface. Flat surfaces allow the feet or stands on the bottom of the projector to be on an equal level, which promotes air circulation under the unit. 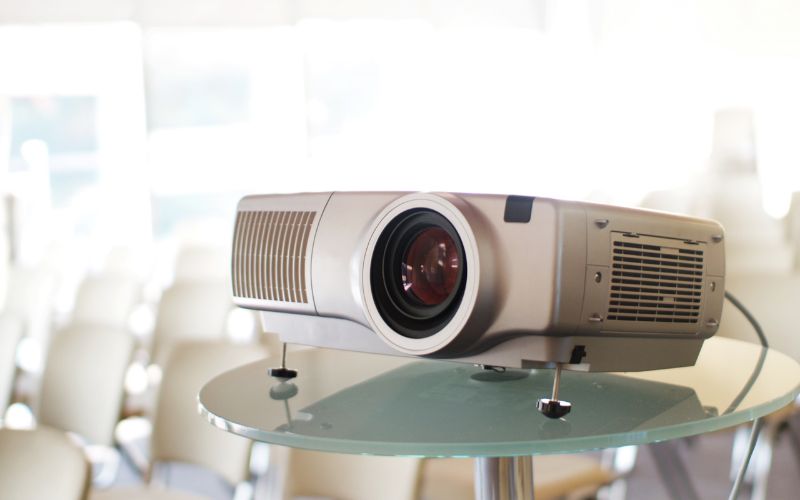 There is no harm in using other cooling systems like external fans or a cooling pad for your projector.

These options will keep the unit cooler and reduce the strain on the projector’s internal cooling fans.

Projectors have settings that allow you to reduce how hard the projector is working. In most projectors, this setting is called the “ECO Mode.” 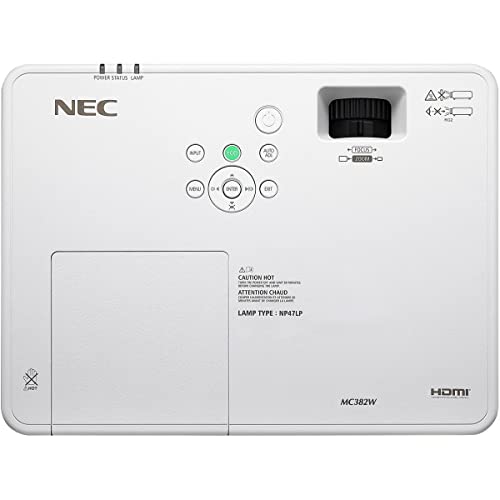 Eco mode reduces the brightness of the projector, which is beneficial in three ways:

NOTE: Don’t forget to turn off your projector when it is not in use. Give it enough time to cool off — it will function optimally when you need to use it again.

Some projector users argue that a noisy projector is no big deal. “What’s all the fuss about when you can drown out the sound with great external speakers for projectors?”

If the noise is excessive, you should pay attention to the cause and resolve it. Blocked vents, overheating, and failing parts can eventually cause permanent or expensive damage.

We hope this article has helped point you in the right direction for quiet projectors. If you already have a noisy one, you can lessen the noise with maintenance, power-saving mode, or other cooling systems.