If you have recently adopted a ferret or are thinking of adopting one, you’ve probably researched the toys that ferrets like to play with. Amidst this, you might have come across laser pointers for ferrets, bringing you to the pertinent question: are laser pointers bad for ferrets?

To answer this, we will first need to see how ferrets react to laser pointers.

Do Ferrets React to Laser Pointers?

Much like cats, ferrets also have hunting instincts. Therefore, they enjoy chasing moving objects too. This could be anything that will pique their curiosity. This is exactly what laser pointers do. While they may not necessarily be able to see the color of the light, they do detect the movement. So you shouldn’t be surprised if you see your pet ferret darting after a laser pointer that you move from one spot to another.

Why Does My Ferret Not React to The Laser Pointer?

A ferret with not much interest in a laser pointer may just naturally have a lower prey drive, meaning it may also display such behavior in the wild unless its survival depended on it. A pet ferret gets its food from you without hunting by itself, so one with a low hunting drive may not feel the need to engage in hunt and prey. But chances that a ferret would ignore a laser pointer are very low.

So to answer the first question, ferrets do react well to laser pointers. For this, you should understand the psyche and nature of a ferret. Ferrets are meat-eating animals. They have a diverse diet, and when left in the wild, they hunt and fend for themselves. So, in essence, they are hunters. Their domestication over the years may have subdued these hunting instincts, but they still very much exist. So when your pet ferret sees a moving object, it sees it as its ‘prey’ and will chase it in an attempt to ‘hunt’ it.

Benefits of Laser Pointers for Ferrets

When you ask, ‘are laser pointers bad for ferrets’, you need to first see if there are any advantages to its use for ferrets. Laser pointers are commonly used as play toys for many pets, but they have proven viable for animals with natural hunting instincts like cats and ferrets.

Here are some benefits of using laser pointers for playing with ferrets:

Ferrets are very intelligent animals. As a result, they need to be occupied. Otherwise, they get bored, just like humans do! As a ferret owner, you should know that this isn’t your average pet—a ferret’s brain is wired in a way that it wants to work and be engaged.

For this reason, they need interactive, stimulating toys. If you want to keep a ferret happy and healthy, you can allow them to chase laser pointers. After all, the challenge of chasing after a dot is always exciting and mentally invigorating for these smart animals.

A ferret’s intelligence can be a double-edged sword. They are smart and inquisitive, meaning  that they will get into anything if left to their own devices. They might run away with your jewelry or anything they get their hands on. They might also dig up your houseplants and cause a mess. Due to their experimenting nature, they might even end up swallowing small objects. Moreover, in an attempt to help exercise their hunting instincts, your ferret may start to hunt any rodents or rabbits it spots in the house. To avoid seeing a dead animal  in the house thanks to your pet ferret, laser pointers will allow it to use this instinct in a less gruesome manner.

Therefore, you need to invest your energy elsewhere. An animal as intelligent as a ferret will find laser pointers exciting, which is rare since they do find most toys and activities boring. Keeping their mind occupied with laser pointers will mitigate the possibility of them exhibiting the destructive behaviors mentioned above.

Contrary to popular belief, ferrets are active and social animals that need their play and physical exercise as much as more conventional pets as dogs and cats do! In fact, ferrets require a minimum of 2 to 4 hours of playtime outside their cage. Otherwise, they will become bored and less physically and mentally healthy. It’s very hard to find toys that interest ferrets, so most pet owners find laser pointers to be very helpful.

Chasing a laser pointer alludes to a ferret’s natural hunting instincts and this will help it receive its daily dose of mental and physical exercise.

Are Laser Pointers Bad For Ferrets?

While laser pointers reserve some advantages for ferrets, there may be some downsides too. This has more to do with a ferret’s nature.

Since ferrets are naturally intelligent animals, they will enjoy a mentally stimulating activity like chasing after a laser pointer. However, since they are smart and have natural hunting instincts, they won’t give up until they get their ‘prey.’ But this is impossible with a laser pointer. Instead of just giving up, some ferrets may become agitated and unnerved. They may even start exhibiting problematic behaviors as a result of this ‘failure’ to catch their prey. In essence, the lack of closure in laser pointer chasing may mess with your ferret’s head.

It’s easy for some ferrets to start experiencing sleeplessness and refusal to eat their food when they become upset. Therefore, pet owners are looking for other ways to help satiate their ferret’s need for play. This can be done with rope and chase toys where the ferret can get its claws on the animal attached in front and feel satisfied.

Why Laser Pointers are Bad for Animals

There is an ongoing debate whether laser pointers are good or bad for animals. There is no one simple answer. While there are some benefits of using laser pointers for some animals, there are also several downsides, as discussed below.

Since chasing laser pointers does not provide the animal with any closure, this incurs the chances of neurosis among dogs, not so much in cats, though. They may develop an obsession with light and shadows, causing them to display destructive behaviors. In extreme cases, dogs may also start barking at lights in a room and refuse to eat or sleep properly. 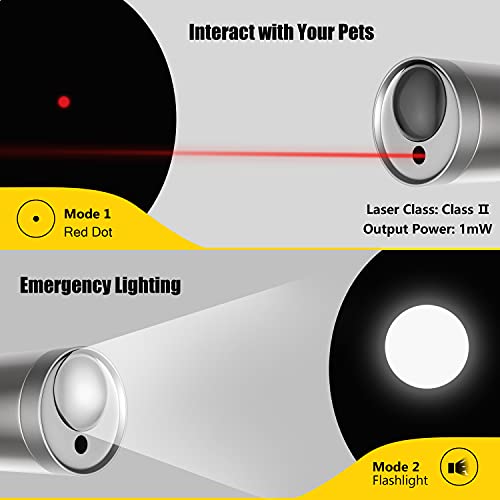 One major and potentially dangerous side effect of laser pointers for animals is the possibility of eye damage. The laser beam can prove harmful to the retina if you look at the light directly. Now, humans might avoid this, but animals won’t have the better sense to avoid direct contact with the beam. In extreme cases, it can lead to complete loss of vision in an animal.

Conclusion: Should You Buy a Laser Pointer for Your Ferret?

When thinking of using laser pointers for pets, you should consider the kind of animal you have. Since dogs can be taken on walks and can indulge in play outside, they have better alternatives to laser pointers. However, laser pointers can work for animals with natural predatory instincts like ferrets and cats.

However, since laser pointers can be harmful to animals, they should be used with caution. So, to sum up, you can use laser pointers to play with your ferret as long as you strictly avoid shining the laser beam into the ferret’s eyes to avoid the possibility of eye damage. If used correctly, ferrets may even enjoy this stimulating activity.