Using a projector capable of producing a 3D-compatible image is a great way of making a movie more exciting! Not all projectors are the same, though, so you’ll need a compatible pair of 3D glasses.

You may have some 3D glasses on hand already, but are they the right kind?

Each type has a corresponding type of 3D glasses which can only be used to view that type of 3D projection.

Do you know what kind you have?

To find out, it’s important to know about the different types and how they work!

No matter the type, 3D glasses all have the same purpose of producing a 3D image from a projection.

It seems like all 3D glasses should be interchangeable, but they’re not!

Basic knowledge of the three types will help with understanding the specifics of 3D projections and glasses. We will cover them in more detail further down.

The properties of each type are important; it makes each one incompatible with the others.

They all have one thing in common, though: manipulating light.

Anaglyph projections are the simplest. They are characterized by an image with a halo of two colors on either side of an object.

Active shutter projections are the most complex. Multiple images per frame flash faster than human persistence of vision. The flashes are synced from the projector to special 3D glasses.

To understand why 3D glasses are not universal, we’ll take a look at the three parts that make up a 3D projection.

The Three Parts of 3D Projections

Three variables must be compatible with each other for a 3D projection to work: the media, the projector, and the screen.

If any one of these is incompatible, the 3D projection won’t work. Luckily, some of them can be fixed or adapted to work.

The most basic of them is also the easiest to adapt: the media. 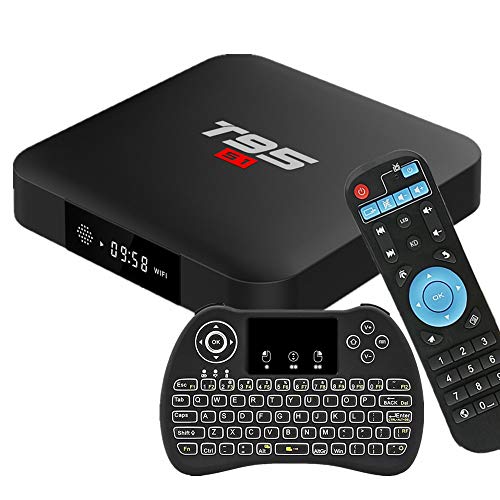 The very first step to getting any 3D projection to work is having 3D media to play. It can either be 3D by default or have options to enable different 3D modes.

By changing the 3D settings inside the media menu, you can change the projection to adapt to the projector and the screen.

The available options will depend on how old the media is.

2. The Projector: Software and Hardware 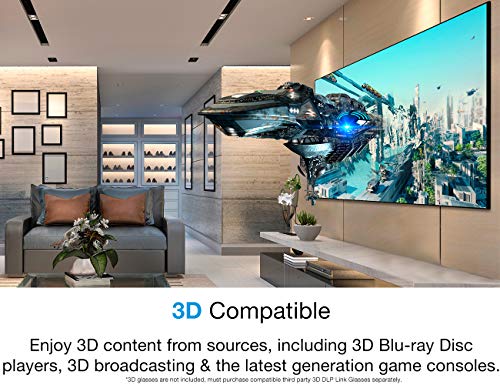 The next most basic component is the projector you use. The software and hardware it has available will determine what kinds of 3D projections you can use.

At the very least, a projector must be 3D-compatible to project 3D media. If it can do that, it likely has settings to let you adapt the projection.

Just like the media, your 3D projector will have settings to project different kinds of 3D media. 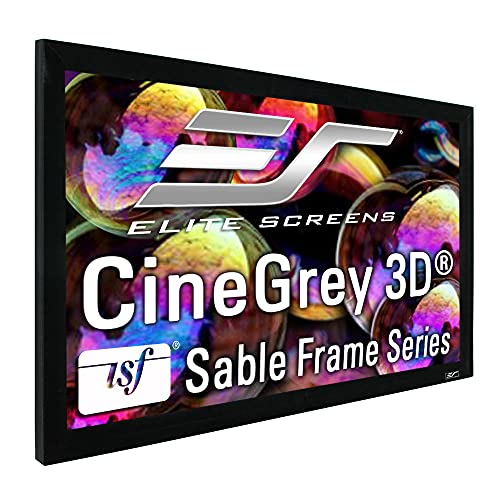 The type of screen you use isn’t an issue for 3D projections most of the time. But there is one exception:

Regular projector screens can be rough, uneven, and scatter too much of the light.

Polarized projections require a special kind of projector screen which is designed to keep the polarized light intact .

Now that we know what the three main components for the projection are, we can look at the 3D glasses that go with them!

Although they are not part of the projection itself, the 3D glasses you wear are just as important.

Using the wrong kind or using them incorrectly will lead to a distorted non-3D image.

So, what types of 3D glasses are there and how do you use them correctly?

What Are the Different Types of 3D Glasses?

It comes as no surprise that for each type of projection, there is an accompanying type of 3D glasses.

Likewise, the three types of 3D glasses are anaglyph, polarized, and active shutter.

The three range in complexity from being able to DIY them, to needing special electronics to work.

Like the projection, anaglyph 3D glasses are the simplest of the three; they consist of two differently colored lenses.

By combining these colors in different ways, full-color images can be made to look 3D.

Depending on the kind of the desired image, 3D anaglyphs can use a variety of lens color combinations. The most common combinations are red-green, red-cyan, and amber-blue.

This type of 3D glasses has the benefit of being easily constructed at home by using transparent colored plastic.

The combination of red and green was one of the first types of 3D glasses invented. While they are less common today, they are still useful in some cases. .

Since they only use red and green, these glasses display simple monochrome (without color) images.

Their primary use is in media like books, comics, and black-and-white images. 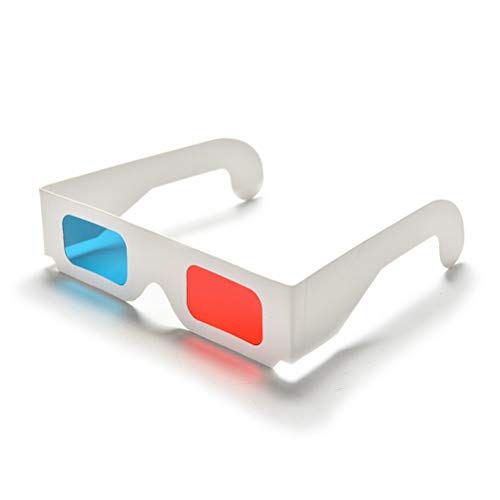 The most recognizable and popular type of anaglyph glasses are red-cyan glasses . Although they have been superseded by polarized 3D glasses, they’re still frequently used.

One lens is red while the other is cyan, a combination of green and blue. This gives each eye part of the information for a full-color image.

When the information from both eyes is combined in the brain, it creates a full-color 3D image.

A consequence of the stark color contrast is that the red in images will be slightly desaturated.

One of the newer kinds of anaglyph glasses is amber-blue glasses . They have much less use due to polarized glasses but are still a great choice for viewing anaglyph 3D media!

One lens is colored amber, a combination of red, green, and gray. The other is a darkened blue.

This combination gives a better, full-color experience, but sacrifices image brightness in the process.

Due to the inherent dimming, they are best used in a dark room or with a bright projection. 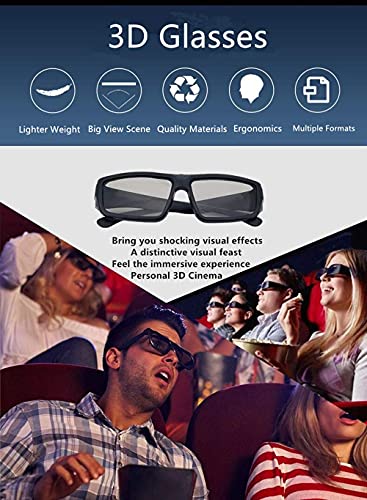 No products found.. They’re found in every movie theater and will often be included with a 3D movie DVD.

Polarized glasses work by having each lens filter out differently polarized light.

The topic of polarization is complex, but it can be thought of as a light wave being either horizontal or vertical. So, one lens would have a horizontal filter while the other has a vertical filter.

To work, two slightly different images with different polarization are projected on top of each other. Each eye will receive only one image and be combined in the brain into a 3D image.

This method allows full-color images to be viewed easily.

The downsides are that a special screen is needed and that the 3D image won’t work if the wearer moves their head too much. 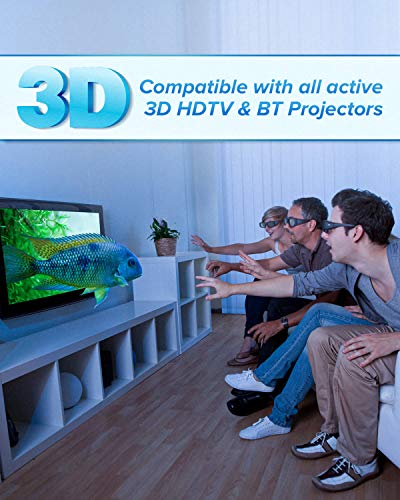 The most advanced type of 3D glasses is active shutter glasses . Many new projectors now support them.

Active shutter glasses work by having lenses that contain an LCD layer. When a voltage is applied to the LCD, it becomes opaque and blocks light from going into the eye.

To make a 3D image, the projected media will quickly alternate between the left and right image for each frame.

Likewise, the lenses very quickly alternate, become opaque one at a time. The switching is fast enough that the dimming is not perceptible.

By syncing the projector and the glasses, each eye gets its respective image. The speed of the switching means that the brain correctly combines the pair into a 3D image.

These 3D glasses are great for viewing crisp 3D media at home. However, they have the downside of being pricey, needing specific equipment to work, and only working with the same projector brand.

Which 3D Glasses Are Best?

Choosing the best kind of 3D glasses for your projector depends on where and how you want to use them.

Which 3D Glasses Are Best For a Budget Home Theater?

The best option for a budget home theater is anaglyph 3D glasses.

The versatility, low cost, and minimal setup make anaglyph 3D glasses the perfect choice for a home theater on a budget.

Which 3D Glasses Are Best For an Advanced Home Theater?

The best option for an advanced home theater is active shutter 3D glasses.

Which 3D Glasses Are Best For a Movie Theater?

The best option for a movie theater is polarized 3D glasses.

All 3D glasses aim for the same end goal: Separate an image into two parts, giving one part to each eye.

Active shutter glasses are more advanced and provide better quality, but require batteries and must be synced with the projector.

3D glasses are not interchangeable, so it’s important to know what kind of projector you have and what it can project.