We can all agree that a great movie is best enjoyed on an equally great screen. This means watching their favorite films on a big surface — similar to the cinemas for many people. This paved the way for many homeowners to get their home theater setup.

While matte white screens have been the industry norm for home theaters for decades, ALR screens have recently become more popular with users.

That’s what we’ll be exploring in this ALR screen vs white screen review.

What are white projector screens?

White screens are currently the most common type of projector screens today. You can find them in offices, schools, and home theaters. This screen has a gain of 1.0 to 1.2 and is famous for its versatility and affordability.

Due to its ability to diffuse light more evenly over a large surface, white screens are more effective in reflecting light to a viewer’s field of vision, regardless of how far or off-center the light source may be.

White screens are compatible with standard and short-throw projectors. You may also use them with ultra-short-throw formats.

What are ALR screens?

Also known as Ambient Light Rejecting (ALR) screens, this type of projection technology does basically what its name suggests: It rejects ambient light from other sources in a given room. 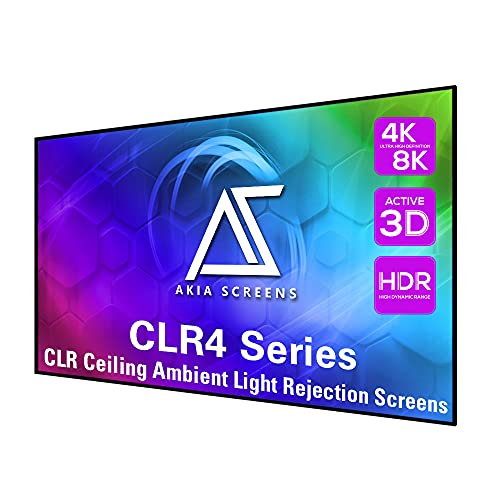 ALR screens filter out ambient light, allowing a clearer and much more enjoyable viewing experience, even during the day. Some ALR screens also have picture-enhancing properties that make images brighter, crisper, and vibrant.

Due to its filtering mechanisms, ALR screens may look dark or grey to human eyes. This is why people also refer to ALR screens as Dark Screens, Grey Screens, or Black Screens. The standard screen gain on ALR screens is similar to white screen projectors (around 1.0). However, this number can change depending on the manufacturer.

Side by side comparisons: ALR Screens vs White Screens

Both ALR screens and white screens have their advantages and disadvantages. In this section, we’ll be taking a closer look at the pros and cons of having either screens, their functions, features, and their prices.

ALR screens can improve the contrast of any projected image. In other words, they can make the shadows in movies darker so viewers can see clearer images even in ambient light.

ALR screens can be used for a variety of applications, from residential to commercial. You can even use them for video games and other activities involving video projection.

If you have good control over the ambient light in your space or environment, then a white screen is a much better option. This is because most projectors have built-in contrast adjustment controls that automatically adapt their settings to indoor environments.

Your ALR screen wouldn’t do much good in a controlled environment, like a basement or attic.

ALR screens are equipped with a reflective base layer that’s topped with multiple diffusion layers that filter out ambient light. These filters also enhance the color, brightness, and sharpness of images projected on the ALR screen surface.

When using an ALR screen, it’s important to make sure that your projector is properly centered. Otherwise, you won’t get the crisp, vivid images that you expect.

Additionally, avoid placing any ambient light directly behind the projector.

One downside to using ALR screens is that certain bright colors tend to lose detail due to the screen’s native color. Some colors such as red or purple may seem duller on-screen.

This may also be because ALR screens typically have less gain than the latest matte white screens.

White screens are the industry standard screens for most home and commercial cinemas — and for a good reason. It’s versatile, cheap, and it has a grain classification of 1.0 to 1.2 (or more, for newer models). White screens are capable of uniform diffusion, which allows them to evenly distribute the projector’s light over its surface.

We mean that because white screens are so good at uniform diffusion, they also tend to reflect ambient light quite evenly over their surface. This washes out the projected images on the screen, giving you blurry, low-contrast pictures.

This is why it’s better to use white screens in dark, well-controlled environments with less light to interrupt your projector.

White screens require fewer materials and effort to create, which is basically why they cost less than a high-end ALR screen. ALR screens use up various resources and materials to make, so they normally cost a couple of dollars more. However, as technology advances, you may find that the prices for either a white screen or ALR screen are almost identical.

Ultimately, whether to buy an ALR or white screen will depend on the application you plan to use it for.

Conclusion: Which screen should you choose?

Both screens have their strengths and weaknesses. When it comes down to deciding which one is the best for your home theater, think about your environment.

Is your home theater dark, controlled, and has very minimal or no ambient light at all? Then a good old-fashioned white screen paired with a high-quality projector should be enough for a videophile like you.

But if your home theater is also your living room or family room, we suggest you get an ALR screen to cancel out the ambient light in that environment.